Board out of your mind!

by Mica Vincent and Jen Ingan 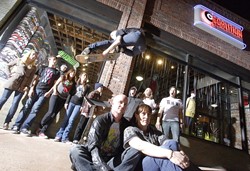 # This three-word tagline is attached to a new skateboard and clothing shop, Coalition, which opened downtown April 1.

"We're pure skateboarding," said Coalition co-owner and manager Jono Hicks. "Kids can come in here and they can hang out and watch skate videos. And we have an 18-foot display case of trucks and wheels instead of cramming it all in."

Hicks explained that Coalition satisfies a niche for customers who want to avoid surf shops and for those looking for urban streetwear that's higher-end, but affordable. Coalition also carries brands like Nike SB and Stussy, which can be hard to find on the Central Coast.

"We haven't done anything but pull the paper off the windows and unlock the door--[and business] has been fantastic," Hicks said. "I think when we start to run our ads and market the fact that we have certain brands it'll be great."

On April 13, well-known tattoo and graffiti artist Mike Giant added another unique touch to the store in the form of a 12-by-12-foot work of art for the shop's back wall.

"For him to come to a place like San Luis is pretty cool," Hicks said.

Several more artists have contributed murals, permanent work, and hanging art for the wall, giving the shop a visual flavor that sets it apart.

Hicks co-owns the shops with his wife, Stephanie Hicks, who explained that their employees know the fashion and/or skateboarding merchandise well, but don't alienate customers who may not know as much. Sweet.

This week's Strokes and Plugs was compiled by interns Mica Vincent and Jen Ingan. Send your business news to strokes@newtimesslo.com.