Fresh coffee beans actually look like green peas that have been split in half and start to smell like slightly burnt popcorn as they’re being roasted. If you’re feeling a little doubtful, go see for yourself at San Luis Obispo’s in-house roaster and coffee shop, Coastal Peaks Coffee.

Owner Michael Knight welcomes anyone to come in and observe the coffee-making process and learn more about the drink for which everyone can be thankful. While you’re at it, have yourself a cup on the house between May 30 and June 5 and experience the roasting process firsthand.

“We encourage people who haven’t been here to come back a second time,” Knight said. “We don’t mind giving away a free cup of coffee, because if we can impress them enough that they like the product, then we’ll probably see them again soon.” 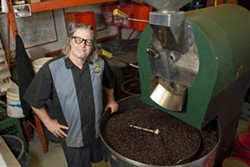 Coastal Peaks has wholesaled freshly imported coffees from around the world to local stores and restaurants for seven years, but now they’ve entered the world of retail with a new café on South Higuera Street in SLO. You may not realize it, but if you’ve dined lately at restaurants like Giuseppe’s or Big Sky Café and ordered yourself a cup of joe, you’ve already enjoyed their coffee. Knight still enjoys providing quality coffee to locals, but opened the café to give a face to an already reputable provider.

The company’s artisan 1980s coffee roaster resembles a black oversized mailbox attached to a jet engine and requires constant attention by its operator—but why such an archaic model?

“I would relate it to an old cast-iron skillet that has that seasoned use and taste to it,” Knight said. “It’s just developed the characteristics that we’ve had on it, takes a little longer to roast on, and allows us to roast anything from a light roast to a dark French roast just the way we want it.”

The beans are loaded into a funnel-shaped piece on the top and are roasted at about 370 degrees, which eventually increases to about 420 degrees as you begin to hear the beans crack. See? It’s just like popcorn. After drawing a few tablespoons of hot beans from the fiery roaster a few times, they’re finally ready for phase two. Whoever’s handling the roasting then pulls a latch to release the beans into a cooling bin that stirs them as it sucks in fresh air from underneath until they’re ready to be packaged.

“The process is really hands-on. All of the newer stuff is all computerized; you can actually put in the beans, choose the coffee profile to make like French roast or a mild roast, press three buttons and go read the newspaper,” Knight said. “This older one, you have to watch intently the temperature, and it’s just gas and air flow throughout that cycle so there’s no sitting down, no reading the newspaper. You’ve got to be on it.”

The renowned Roast Master Phil can complete this process once every 19 minutes on the authentic machine, roasting the moisture out of 45 pounds of raw material to make 36 pounds of useable coffee beans.

If coffee isn’t your thing, the shop offers a wide assortment of tea ingredients you can hand select to create your own tea blend. One ingredient even blooms into a flower when exposed to the hot water for a truly aesthetic effect you just have to see.

As for the café itself, it’s hard to not take immediate notice of the lavish décor. Knight worked with Dean Mignola and Stephen Patrick Design to renovate the space to create a modern, sophisticated, peaceful environment.

Coastal Peaks Coffee also offers a variety of traditional and organic fair-trade blends you can take home, on the road, or on one of their couches checking out some of the art from their partner, the SLO Museum of Art. Drop by 3536 South Higuera St. in SLO. For more information, call 543-0179 or visit coastalpeakscoffee.com.

The sixth annual San Luis Obispo Greek Festival is coming to Mission Plaza on Saturday, June 1, from 11 a.m. to 7 p.m. and on Sunday from 11 a.m. to 4 p.m. Eat your fill of authentic Greek dishes and pastries, enjoy the music, and even learn how to dance a “Syrto.”

*Editor's Note: This article was changed on May 21 to correct a caption which misidentified the subject in the photograph.