Three artists explore the human form in a Cambria exhibit

Two embattled male figures can be seen through the glass doors of the Cambria Center for the Arts gallery. From where I stand, they appear to be cast out of steel: One man’s heavy fist has just connected with the other’s jaw, and he remains suspended in the moment of losing balance. In another second, he’ll be on the ground, but for now he’s almost delicate in his falling, like a dancer en pointe. 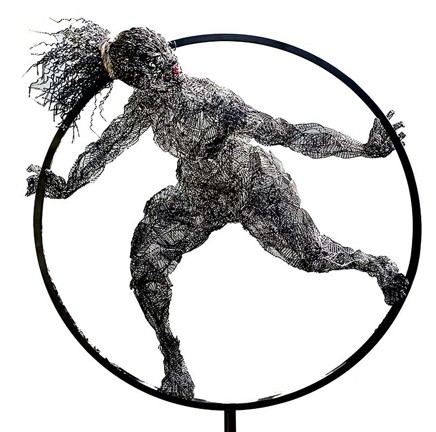 Open the doors, however, and the stony figures reveal their temporary nature—flimsy men made of newsprint and duct tape. Local sculptor Mike Hannon typically works in the far weightier media of copper and bronze. Here, he plays with impressions of weightiness.

Mike, his wife Leslie, and sculptor/illustrator Evany Zirul are the featured artists in the September exhibit “Body Language” at the Cambria Center for the Arts. The three explore the human form through a variety of unusual media. On one side of the space, Zirul presents her new technique of welding clothes hangers into delicate dancing figures, their loose black lines echoing her pen-and-ink drawings that hang on the walls. On the other, the dull gray shine of Mike’s deceptively temporary sculptures is echoed wonderfully by Leslie’s drawings, in which the figure is often rendered in neutral silvers and grays and accented by dramatic reds.

As in Zirul’s work, bodies in motion is the overriding theme of Mike’s series. It’s fitting that the two men locked in a perpetual struggle at the gallery’s entrance should evoke an almost dancerly grace; the rest of Mike’s sculptures in “Body Language” are female figures moving elegantly through space, their frozen, gazelle-like leaps suggestive of a curious paper ballet. Newsprint pokes out here and there, or fans out from the figures’ delicate faces. Over the mouth of one of the figures is a line of text that simply reads “everyone else.” I took a closer look at another figure’s fanning newspaper headdress: Yep, it’s New Times. You’re welcome, Mike.

While the postures in Mike Hannon’s series evoke freedom and motion, Leslie Hannon’s female nudes often appear paralyzed, holding internal tension and conflict. Most avoid meeting the viewer’s gaze, casting their eyes downward at nothing in particular while holding their bodies either in constricted near-fetal poses—as in The Paralysis of Regret and Gordian Knot—or in seemingly restful postures that nonetheless hint at deep reflection, such as Turning Point and An Insidious Beginning. 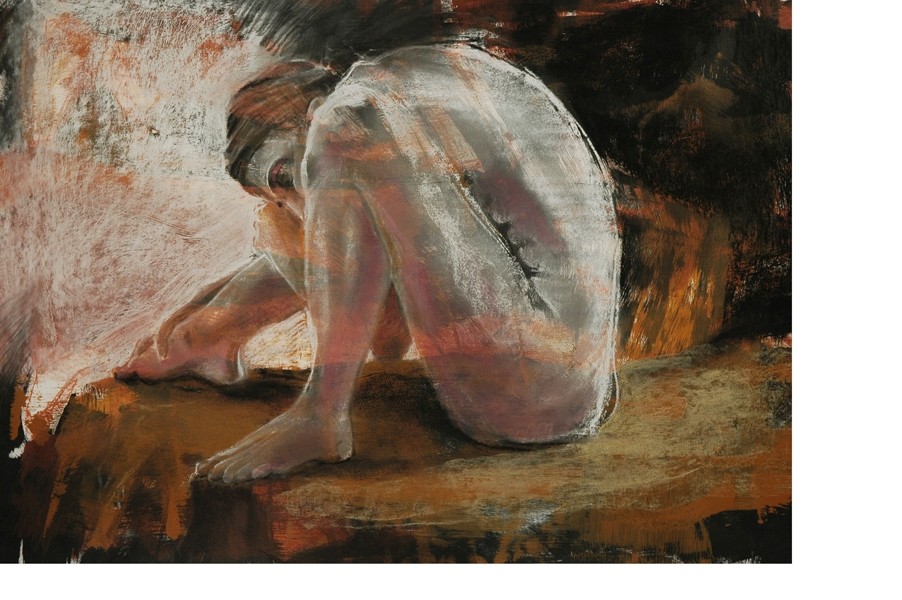 The theme of these works, Leslie explains, is “women who spend their time waiting,” and possibly, she adds, “capturing them at the moment they begin to take action in their lives.”

Unconvinced Certainty, the artist says, depicts the hesitant virgin. Her seated posture is like a clenched fist loosening: defensive, vulnerable, curious. At the other end of the spectrum is Odalisque, meant to represent a concubine bored with her life’s path, but going with it anyway. The strange pose in Gordian Knot evokes a woman waiting for someone to set her free, cutting her invisible ties like Alexander the Great and the ostensibly unsolvable puzzle of myth. The figure in Collecting Days is a much older woman, her face clouded. She slouches slightly, remembering the past.

The aforementioned Paralysis of Regret achieves something positively ghostly: You see through and beyond the crouched, pale figure it depicts, whose physical presence seems only barely substantial enough to fill in the lines that contain her.

Zirul, too, explores notions of solidity with her series of welded clothes-hanger figures, most of them dancers or acrobats. A retired physician, the artist has a familiarity with human anatomy that’s likely a factor in the creation of her simple yet well-articulated people. A closer look into the structure of these works shows the intricate double-helix pattern that forms the basis of each piece: the sculptures’ DNA.

Zirul’s biggest piece, Leaving Leonardo, depicts a woman breaking free of the circle in which she has been trapped, like da Vinci’s Vitruvian man rebelling against his creator. To Zirul, the piece is a reference to medical drawings, but I saw the figure at first as a circus performer, spinning wildly inside of a great metal ring. The life-size piece took her a total of 270 hours, she says. (The others, which typically stand just a few feet tall, represent between 50 and 60 hours of work.)

Heartfelt is the series’ most visceral addition: a woman tearing her red-painted heart from her chest and holding it in her extended hand, like a sacrifice. Other pieces are sweet and whimsical: a tutu-clad ballerina in third position; a gymnast in a yellow suit, body forward, leg back, in a flying letter T.

The black squiggle of Zirul’s sculptures against the gallery’s white walls harmonizes elegantly with her pen-and-ink drawings, which often take a dark, creepily medical turn. Bodies sprout out of other bodies. Physical and mental afflictions are personified as mischievous “little people.”

Curated by Lucie Ryan, “Body Language” lives up to its name, showing us the myriad ways in which we use the physical form—our own, or someone else’s—to convey our past and future, joys and terrors, triumphs and afflictions.

Arts Editor Anna Weltner is amassing a body of evidence. Contact her at aweltner@newtimesslo.com.