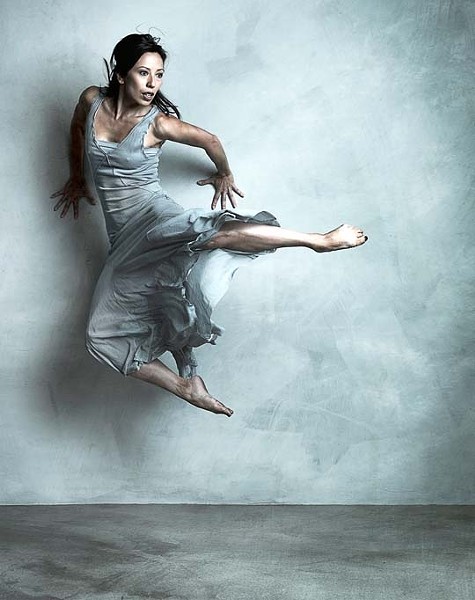 Respectively, the pieces are 28, 22, and 24 minutes long, meaty performances with a colloquial style that should appeal to just about anyone. While Deyo has staged “Blue” before, she re-worked the piece significantly for this year’s performance. When she first made the piece in 2002 her goal was to capture a distinctly American spirit in dance, so she turned to music that featured a vibrant representation of jazz—go go, Charleston, honky tonk, Chicago blues—encompassing all of the things that jazz can be—sensuous, saucy, languid, dizzy, brave, messy, joyous, celebratory, and ponderous. At the time she was working with nine student dancers, but this year’s presentation has expanded to 19 professionals, allowing Deyo to pull more from the piece.

Then there’s “Non Troppo,” a work inspired by Beethoven’s 15th sonata and reflective of Deyo’s appreciation of serenity. Non troppo translates to “just enough,” which is how Deyo felt about Beethoven’s composition. The choreographer had been listening to KCBX when the sonata came on the radio; she immediately pulled over and called the station to ask what they were playing. From there, she made a trip to Boo Boo Records to purchase the music that had so immediately inspired her.

“Before that everything was larger, bigger, faster, slower. And this one’s just enough,” said Deyo. “It just sounded like this pastoral community family group of people at varying stages of their lives. Beethoven introduced the characters.”

The nine dancers spend the entire 20-minute plus piece either dancing or lounging on stage and Deyo cites one of her favorite writers, Edith Wharton, as the era and mood she sought to establish. Some of the performers are young, while others are rich in life experience. Overall “Non Troppo” expresses Deyo’s appreciation for those relationships that, like the title of the piece, are just enough.

Deyo calls the final piece, “What the hell Jacques,” an anniversary present to her husband. Though the tribute starts with a group piece, it’s mostly comprised of duets that reflect the various stages of their relationships.

“You never know what he’s going to say next because he’s thinking 10 things at a given time,” Deyo said, of her husband. “We could go anywhere and it would be fun and exciting. He likes to sleep in weird places. He’s very curious and adventurous.”

The first of these is danced to music from a street musician in Barcelona. While Deyo and her husband lived in Barcelona they would listen to a Russian banjo player singing en plein air, and they purchased his CD before they returned to the United States. The musician’s version of “I Can’t Give You Anything But Love” is tender, and commemorative of their poor early years together. But the dancers, Drew Silvaggio and Helene Dinsmoor, move together as naturally as a couple that has been together for some time.

Then Deyo flashes back to dating with Harmony True and Horacio Heredia. After that it’s on to Jennita Russo and Jake Chapella’s duet to “Stuck In the Middle With You,” which Deyo choreographed to convey that Jacques is a self-made man.

The penultimate piece features a decided musical twist. Deyo’s youngest brother lives near Barcelona in a town with a church that has bells that ring on Saturday. At Deyo’s request he went to the site with his two children and recorded the bells in their relentless peal, accidentally taping his young children’s gibberish as well. The work is danced by Tanya Tolmasoff and Ryan Beck, though Deyo’s daughter puts in an appearance as well. Life is sometimes hard, Deyo wants to say with her choreography, but she and Jacques overcome life’s obstacles together. In the past year this has been especially important for Deyo, who sustained a difficult loss this year and subsequently realized that making art is how she makes sense of her world.

In the final piece, Deyo dances with a chair to Inga Swearingen’s and Jody Mulgrew’s “Tonight You Belong to Me.” She calls the dance peaceful, which, for Deyo, indicates a kind of relationship Nirvana.

“Ecstasy, joy, those are over-rated,” she explained. “I think the best is peace, the wonderful calm that you get with the people you love.”

But the realization that acted as a catalyst for the piece was far from peaceful. Deyo’s husband suffered two pulmonary embolisms.

“After the second one it occurred to me that if he died today or if he died at 90 it would be just as hard,” she lamented. “Because whether it’s 25 years or 50 years, it’s going to feel like a blip.” So, she did the only thing she could; she created a piece that exults in the time they were given, even if it’s a single day and night at a time.

While Deyo’s works span the breadth of human relationships and experience, she creates with a distinctive movement vocabulary. Whatever her theme, she relies heavily on partnering and dancer interaction. Also, Deyo calls herself “a real stickler for ballet lines and pretty feet.” Drawing dancers from the entire community, including other companies and often other cities, the choreographer works with talented and diverse pool. During rehearsal, she works with different schedules, meeting dancers morning and night. For Deyo, it’s a glorious couple of months preparing for a show.

“It becomes this whole other living thing in their bodies,” she said. “Dancers are all so different; to find their strengths and then pull them out is so satisfying.”