'Bohemian Rhapsody' overcomes its flaws by being joyously uplifting 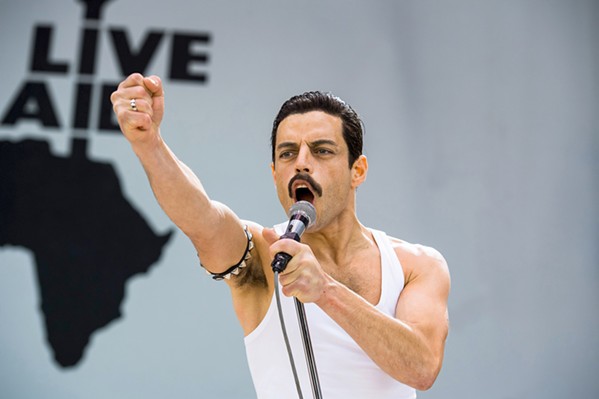 Glen The criticisms you've heard are all true: The film's chronology is inaccurate, it skips over or condenses much of Queen's history, its PG-13 rating sanitizes the story, and star Rami Malek's prosthetic overbite teeth are distracting. But none of that stops Bohemian Rhapsody from being an engaging, joyous, and highly entertaining film. Original Queen band members Brian May (guitar, voice) and Roger Taylor (drums, vocals) are executive music producers on the film, so you're hearing original recordings ... and the music is fantastic, including small moments when Freddie is quietly singing to himself recording sessions for the Live Aid concert. I'm not 100 percent sure, but I thought I caught a glimpse of May and Taylor as extras in the Live Aid scenes, sitting like roadies in the scaffolding of the stage, watching the show from above. The film opens with Freddie's triumphant entrance on the stage of Live Aid, looking out at the sea of 90,000 people packed into Wembley Stadium. You really get a sense of just how huge Queen was in their heyday. Then the film cuts back to Freddie with his disapproving family as he goes out to see his favorite band, Smile, which included May and Taylor, who eventually become his Queen bandmates. From there, the film chronicles Queen's slow rise to superstardom, Freddie's marriage to Mary Austin (Lucy Boynton), his ill-fated solo career, his descent into personal chaos, his AIDS diagnosis, and the eventual reunification of Queen. It's quite a tale.

Anna It's a big story of a truly complicated figure, an icon, and legend. Malik steps up to the task to play the both larger-than-life and painfully human Freddie Mercury, who was a tornado of talent and a lost boy at the same time. He was born in Zanzibar and raised in India before moving to Britain, and his parents are portrayed as conservative and concerned with Freddie's rock 'n' roll tendencies—his flamboyant and over-the-top performances, a source of shame. Bohemian Rhapsody is not a detailed and wholly accurate portrait of Mercury's life, but I think it wasn't meant to be. To stay within the confines of a PG-13 rating means glossing over some of the more scandalous moments of drug use and wild sexual affairs, but anyone remotely familiar with Mercury's life can fill in the gaps pretty easily. While I personally would have preferred an R rating and a deeper dive into the nitty-gritty, I understand the filmmaker's hope for a wider audience. I can see where the sweeping storyline could be frustrating to diehard fans with a lot of knowledge of the details, but for casual Queen fans like myself I think it works just fine. If anything, it made me want to hunt down a good biography of the group and get those juicy bits in long form. Like you said, the music in this film is amazing—I'll be singing out "Galileo! Galileo!" for days, and the access to all those original recordings really elevates this film's soundtrack. 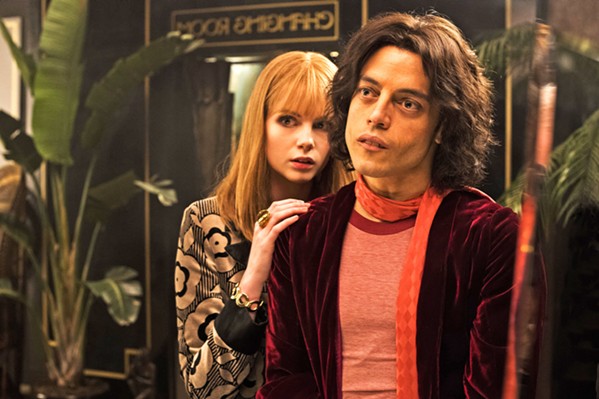 Glen To call Freddie Mercury "complicated" may be a bit of an understatement. He's clearly torn between cultures, confused by his sexuality, and vacillating between utter confidence and crippling self-doubt. Icarus-like, he flies too close to the spotlight, losing sight of what's important. He ruins his marriage. His relationship with hanger-on Paul Prenter (Allen Leech), who's essentially the film's villain, is almost Freddie's downfall. The film takes big liberties with the facts regarding Paul and Freddie, but in service to the plot, it's a pivotal aspect of the story as Freddie reclaims his soul and returns to his family, Queen. Like a lot of musical acts, the whole of Queen was more vital and important than its individual members, and as a story of a rock band, Bohemian Rhapsody delivers a dramatic ride. Queen's music and lyrics are deftly woven into the story—the songs reflect what Freddie and the band were going through at the time. In addition to effective performances by the principals, the film is loaded with spot-on smaller roles filled with top-notch actors such as Tom Hollander as lawyer and eventual manager Jim Beach and Mike Myers as Ray Foster, the man who lost Queen over creative differences just as they were poised for superstardom. Set aside your picked nits and sit back and soak up this uplifting ride. Yes, the film is flawed. So was Freddie Mercury, but that didn't make him any less of a legendary rock star!

Anna Bohemian Rhapsody is one of those films that just works better on the big screen. The scope of the audience at Live Aid is astounding and the massive sound that Queen created deserves a system that can do it justice. Critics can point out flaws in the film and storyline all they want, but I suspect the rest of the audience will have a lot of fun ignoring them and immersing themselves in the music for a couple of hours. Mercury's failing health and fade from the limelight is melancholy, but the epic performance at Live Aid is a joyous rise back to the top for Mercury. It's epic! Δ