The Snow Queen may be one of Hans Christian Andersen’s best and most haunting stories, not only a battle between external forces of good and evil but a battle between what is good and evil in oneself. For a children’s tale, it’s surprisingly dark and sophisticated, easily engaging adults in its fantasy world of devils, snow bees, twisted mirrors, and ice palaces.

Unfortunately, however, the Cuesta College Drama Department’s upcoming staging of Andersen’s wintry tale, with its rather exaggerated characters and general feeling of silliness, will likely appeal only to children. Director Philip Valle’s adaptation, for instance, sees protagonist Kai receiving a camera phone from her best friend Greta’s grandmother and exclaiming, “I’ve never had anything of my own before!” (Soon, the girls are texting one another in Andersen’s archaic-sounding prose, loudly pronouncing “Send!” each time.) Kai is kidnapped by the Snow Queen in order to help the evil woman better “market” her “brand,” and the girl’s disappearance is reported by newscasters in Viking outfits.

All right, that last part is genuinely funny. But something about the production’s rather crude modernization drains Andersen’s tale of its eerie romance, replacing it with something harmless, bright, and fun, but with little to engage the adult viewer. 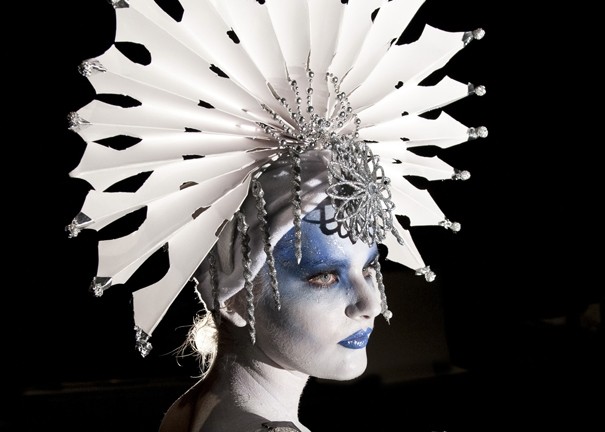 Valle’s wife, fellow drama instructor bree valle (she doesn’t capitalize her name), conjures an opulent wardrobe seemingly out of thin air. Given a meager budget, valle constructed most of the costumes from recycled materials, and the results of her handiwork are impressive. The resplendent finery and otherworldly makeup of the Snow Queen (played by Clara Fulks) alone represents an artistic triumph, as do the detailed getups of the Viking newscasters (Stephen Winteroth and Janine Fastenau) and the Queen’s drones.

The play opens with narration by Kamas’ Andersen, who tells us that, once upon a time, the fairies were bored—so bored that they decided to create a mirror that would magnify all that was evil and wicked in the world, and refuse to reflect all the good and beautiful aspects of people and things. One day they attempted to carry the mirror up to heaven—but it slipped and shattered to earth in billions of tiny pieces. People started getting little splinters lodged in their hearts and eyes, making their hearts frozen like chunks of ice and their eyes only able to see things as they appear in the distorted mirror: hideous and wretched.

When young, sweet Kai (a boy in Andersen’s original; a girl in Valle’s adaptation) gets a shard of the evil mirror in her eye, and soon after is kidnapped by the Snow Queen for reasons discussed above, her best friend Greta sets off into the wintry wilderness to find her. Viking News covers Greta’s progress with the help of a GPS tracker. Yes, really.

But I haven’t even reached the strangest part. Instead of employing a traditional set, Valle worked with videographers Joseph Ian Saletta and Jeff McIlveen and video engineer Alex Woolum to create a “cyber-set,” using projected video images on several screens. It’s a bold, experimental idea, though at a recent rehearsal, amid the rapid tying up of technical loose ends, it was difficult to gauge the impact of the final production. Whether this new approach to set design will successfully evoke the play’s fantastical environments of snow-covered forests and ice palaces, I’m still not sure.

However, credit is certainly Valle’s due for putting such a unique spin on a classic story. It’s a move that may not be well received by lovers of Andersen’s original. Yet as a showcase of innovative new techniques, or simply as an evening of fun (if occasionally campy) theater, The Snow Queen has plenty to offer.