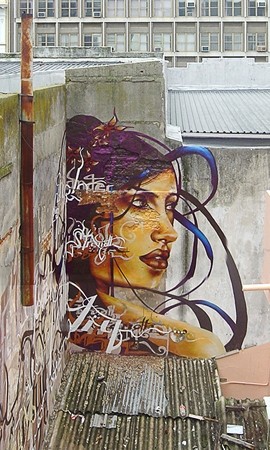 Bomb It! is like really good prime-rib sandwiched between week-old bread that cuts the roof of your mouth. The film, a documentary on the world of graffiti, begins and ends with features on taggers who come across with as much eloquence as a drunken 5-year-old on a temper tantrum. But by the end, director/producer Jon Reiss shows those people really have something interesting to say. It’s really a question of: Who owns public space and who decides what makes it attractive?

“It’s easy for people to love the beautiful work,” Reiss said. “I feel it’s important for people to understand where that impulse to write your name [on the wall] comes from.”

Reiss never answers the question. What he does do is create a pallet of graffiti that ranges from colorful, stylized murals to the more stereotyped bubble-lettered names on walls and subway cars. The film dances between such characters as a well-groomed Frenchman who politely asks a homeless man if it would be all right to glue a poster on a nearby wall, to Revs: a crass tagger from New York with a thick Brooklyn accent who calls himself “fuckin’ Revs” and casually tells the camera, “I mean, if you tell me you’re gonna die two seconds from now I say, ‘Good.’”

The San Luis Obispo Art Center will play Bomb It! at 7 p.m. on July 20. The title comes from “bombing,” which is the street term for graffiti writing. One of the people interviewed in the film explains that “graffiti” is a title invented by the media and repeated by people who don’t understand the art. Bombing is more like warfare, with an army of hooded warriors armed with spray cans repainting the urban world around them.

Art Center Assistant Director Maura Johnston hopes the film will stir conversations and get people to think, and maybe prompt an answer to the who-owns-public-space question. In fact, Johnston invited members of the SLO Police Department to watch and comment on the film. She was also trying to track down local taggers, but was unsure whether they or the cops would attend.

“I’m hoping people will just understand the issue better,” Johnston said. “And it’s such a well-done documentary that it can’t help but initiate dialogue.”

Reiss said he wants viewers to walk away from the film with a different perspective on graffiti, if not a new way of looking at their urban surroundings. “The main reason that I spent so much time working on the film is, to me, it’s not just graffiti or street art … to me it’s much more,” he said. “It’s a battle over public space that’s going on all over the world. Who controls public space? And to me it boils down to an issue of freedom of expression.” 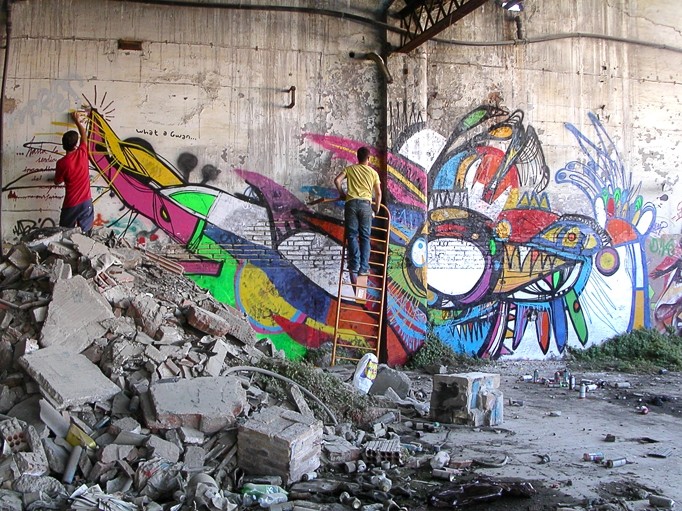 The film is a journey that begins with the genesis of modern-day graffiti when “Corn Bread” began writing his name around Philadelphia. It follows the movement’s spread to New York and the battles between bombers and the police, or the “vandal squad.” There are stories and characters from Paris, where “Blek Le Rat” (the guy who got permission to put up his poster next to a homeless man) creates his own Parisian-style paintings of black rat silhouettes throughout the city. There are such other surprising people as “Mickey,” a grade-school teacher from Amsterdam who’s inspired by her kids to have fun again.

“Doing graffiti is like playing,” she tells the camera.

One of the more poignant scenes follows a young Brazilian man with a pierced eyebrow, “Zezqo,” who slops through the sewers of São Paulo, Brazil, in rubber boots to redecorate. In the dark concrete canals filled with knee-high sewage, Zezqo explains how he retreated from the streets to the place he called “the most contaminated place in São Paulo” to create his own “gallery.”

Filming that scene, Reiss recalled, was the only time he felt scared during shooting. Zezqo stepped on a nail there the year before, Reiss said, and was hospitalized for months.

“Plus it was raining before we went down into the sewer,” he added. “There was a flash flood right after we got out.”

There were other close calls. The film crews were almost arrested in Sheffield, England, when they were mistaken for terrorists while fears were heightened following the recent London bombings.

Despite interviews with the type of people most would happily avoid, Reiss said he wasn’t nervous, unlike filming another documentary about an industrial art show in the Bay Area.

“I’ve almost been killed by robots in performances,” he said. “And shit like this … it’s not like I’ve been in a war zone, but subculture and stuff doesn’t really faze me.”

Ultimately the subculture aspect becomes the central theme of the film. Some of the characters are simply hell bent on destroying things, others are protesting the bombardment of billboards, gigantic advertisements draped on the sides of buildings, and other types of corporate graffiti that isn’t criticized or criminalized.