"Think about what you say before you say it," an administrator warned students over the loudspeaker at Morro Bay High School. 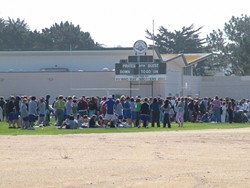 # Several hundred teenagers waited out on the football field on the north end of campus late Tuesday morning, Oct. 17, evacuated from the building following a bomb threat issued to police at 8:46 a.m.

Inside, Morro Bay police scoured the building for signs of an incendiary device, but turned up nothing.

"We came up with a game plan. The school administration secured the students in place while we searched the grounds and closed off any escape routes," explained Morro Bay Police Cmdr. Tim Olivas.

After police swept the grounds, school staff ushered almost 900 students in attendance to the sports fields behind the school at around 10:15 for the indoor search. Students and staff re-entered the building at about 11:20 and classes resumed shortly thereafter.

As the search wound down, administrators asked students to come forward with any information regarding who might be behind the scare. The high school is conducting its own investigation in conjunction with detectives, but, according to Olivas, no indication yet exists that a student phoned in the threat.

"We have two detectives trying to identify a suspect," Olivas said.

The incident marked the seaside town's second major bomb scare in recent months. On Aug. 4, Morro Bay police evacuated a Rite-Aid and Albertsons after discovering a blue duffel bag tagged with a note that read, "It's a bomb. Stay back."

It was filled with gym clothes.