I wonder if listeners some 45 years ago gathered in a little coffee shop in Cambridge, Mass., listening to then-unknown folk and blues singer Bonnie Raitt, had any inkling that more than four decades later she’d be a 10-time Grammy Award winner and named one of the “100 Greatest Singers of All Time” and one of the “100 Greatest Guitar Players of All Time” by Rolling Stone? I sure wish I could have been there.

Back then she was a student at Harvard/Radcliffe studying social relations and African studies, having moved east from her LA home for college. The home life she left was exactly the kind you’d expect to nurture a budding artist: Her father John Raitt was a Broadway performer (Carousel, Oklahoma!, The Pajama Game) and her mother Marge Goddard an accomplished pianist and singer, who raised their daughter “in a climate of respect for the arts, Quaker traditions, and a commitment to social activism,” according to her biography.

She was a founding member of Musicians United for Safe Energy, and even today she remains committed to organizations such as NukeFree.org. She also funded headstones for some of her blues heroes: Fred McDowell, Memphis Minnie, Sam Chatmon, and Tommy Johnson—all through the Mt. Zion Memorial Fund. Her philanthropy is a natural extension of her politics, which bubble over in her art. Her 1972 album Give It Up was dedicated “to the people of North Vietnam.” In 2004, at the Stockholm Jazz Festival, she “dedicated” a song to then-President George W. Bush: “Your Good Thing (Is About to End).” Snap!

Musically, her accomplishments are legion. While 1972’s Give It Up went gold, as did 1977’s Sweet Forgiveness, she really peaked commercially in the late-’80s and early-’90s with Nick of Time (1989 five-times platinum), Luck of the Draw (1991 seven-times platinum), Longing in Their Hearts (1994 two-times platinum), and Fundamental (1998 platinum). Her most recent album, 2012’s Slipstream, found Raitt working with Joe Henry and Bill Frisell and reached No. 6 on the U.S. Top 200 album chart. It also garnered her the 10th Grammy for Best Americana Album. She’s still got it!

This Sunday, May 24, Bonnie Raitt headlines the 22nd annual Avila Beach Blues Festival brought to you by Otter Productions Inc. (doors at noon; show at 2 p.m.; $55 general admission tickets available at vallitix.com, by calling (888) 825-5484 or by visiting Vallitix locations such as Boo Boo Records or the Cal Poly PAC box office). This festival has become a landmark tradition that opens the outdoor concert season, drawing thousands who gather near the Pacific to enjoy good food, good drink, good company, and good music.

In addition to Raitt, this year’s performers include JJ Grey & Mofro and Shemekia Copeland. Grey and his band have moved from “playing greasy local juke joints” to festivals like the Avila Blues, and onstage you can expect a fearless performer who can mix “funk rave-ups” and “bone-deep grooves.” Copeland’s being hailed as “the most soul-shaking, big-voiced blues singer in years, attacking contemporary material like the early Etta James,” according to The Village Voice.

No doubt about it. This year’s blues fest is one of the best yet, and that’s saying a lot for a festival that’s hosted the likes of John Lee Hooker, Bo Diddley, Etta James, Gregg Allman, Trombone Shorty, John Mayall, The Doobie Brothers, Tower of Power, Neville Brothers, Elvin Bishop, Canned Heat, and Robert Cray, among many others.

There are a handful of local events that have come to represent the very soul of the Central Coast: the Cayucos 4th of July Parade, Santa’s House in the SLO Mission Plaza at Christmas, Cambria’s Scarecrow Festival, and the one that ushers in summer, the Arroyo Grande Strawberry Festival, which takes place this weekend, Saturday and Sunday, May 23 and 24.

With its charming small town festival vibe and never-ending supply of activities and entertainment, the Strawberry Festival is simply the best free festival around! You’ll see 40 performing acts on 11 stages, shop at more than 400 booths, enjoy three carnival areas, witness street performers, and even take a camel ride (if you’re willing)!

Trust me, there’s a reason Sunset Magazine called the Strawberry Festival “the place to be on Memorial Weekend.” A complete schedule of events can be found online at www.arroyograndevillage.org/strawberry.asp.

The best time to see a band is on their way up before they get huge, but the second best is on their way down. The plain truth is, no matter how big you get, if you keep playing you’ll go from stadiums to theaters, to clubs, to smaller clubs, and as far as I’m concerned, I’d much rather see a great band I love in a club than a stadium, even if they’re on their way down from the heights of their career. The good news for Asleep at the Wheel fans is they’re playing this Thursday, May 21, at SLO Brew (7:30 p.m.; 21-and-older; $25 presale or $30 at the door) courtesy of Good Medicine Presents.

The band formed in Paw Paw, W.Va., in 1970, but quickly made Austin their home, and they’ve won nine Grammy Awards, released more than 20 albums, and charted more than 20 singles.

“It’s been an amazing ride. From Paw Paw to San Francisco to Austin, we’ve seen it all,” said Wheel front man Ray Benson in press materials. “But, rest assured, there are still so many exciting projects in the works, such as our brand new tribute album [released last] March, Still The King: Celebrating the Music of Bob Wills and His Texas Playboys. The Wheel keeps rolling!”

Also at SLO Brew under Good Medicine’s aegis are Whitey Morgan & The 78’s on Friday, May 22, (7 p.m.; 21-and-over; $15 presale or $20 at the door). The Flint, Michigan-based honky-tonk act sings laments of the heartland: “In Flint, the factories are closed, jobs are scarce, and the people are bitter. Whitey sings songs these people can relate to. In much the same way his grandfather and mentor did over three decades ago, to a whole generation of Southern transplants who came up to Flint looking for the good life,” according to the band’s bio. Expect songs in the spirit of William Morgan, Waylon Jennings, Merle Haggard, and Johnny Paycheck.

On Sunday, May 24, see Sage Francis (8 p.m.; all ages; $15 presale or $17 at the door), a Rhode Island-based hip-hop and spoken-word artist. “Dubbed as the ‘forefather of indie-hop,’ Francis originally earned acclaim in the early 2000s by winning the most highly coveted titles of the emcee battle circuit,” according to his press materials.

On Wednesday, May 27, Rising Appalachia returns (7 p.m.; all ages; $15 presale or $17 at the door). This sister duo delivers arresting and ethereal sounds inspired by international roots music and performed via poetic and soulful vocals, spoken word, and unusual instrumentation including banjos, fiddles, various drums, kalimbas, and beatboxing. File them under strangely alluring.

LA reggae act Dread Daze plays Frog and Peach this Friday, May 22 (9:30 p.m.; 21-and-older), delivering music with a dose of hip-hop, rock, ska, and soul. According to press materials, “Their authentic desire to use their music to open minds, change vibes, and spread a message of peace and unity shines through in every song and has captured the ears of listeners across all genres.” 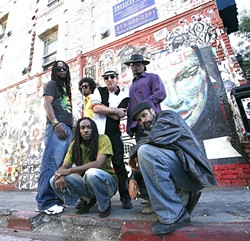 Creeky Tiki plays host to a night of traditional rockabilly and country rock from the Phil Friendly Trio this Friday, May 22. The band’s music has found its way into Hollywood films and TV series, and Friendly’s last CD was a collaboration with Grammy winning guitarist Albert Lee! “It’s getting good airplay on many radio stations in the States,” Friendly said. “Five songs from this CD are in movies and TV shows.”

Singer-songwriter Anny Celsi wrote to tell me she’s on her way. “Memorial Day Weekend brings a little road trip up the 101 with Australian songbird Trysette Loosemore, who’ll soon be celebrating the release of her American-made CD! We’ll be sharing two dates and many miles of girl talk on the Central Coast.” See the pair on Friday, May 22, at Linnaea’s Café (8 p.m.) and Saturday, May 23, at Last Stage West (6 p.m.). “Hope to see you at a show soon!”

Get a taste of the exotic when the 35-member Cal Poly Arab Music Ensemble and guest artists perform a diverse program of music and dance from the Eastern Mediterranean and larger region this Saturday, May 23, at 8 p.m., in the Spanos Theatre. Expect some of the most celebrated instrumental, vocal, and poetic repertoire composed and performed by artists such as Tatyos Efendi from modern-day Turkey, Fairuz and the Rahbani Brothers from Lebanon, and Farid Al-Atrash from Syria. Tickets are $12 for the public and $9 for seniors and students (756-4849).