Boo Boo Records celebrates its 45th anniversary with a party and IPA release at Central Coast Brewing on Aug. 24 Boo Boo Records, the venerated record store (and more!) located at 978 Monterey St. in SLO Town, technically got its start in the back of a Chevrolet Suburban, from which founder Ed Taylor would buy, sell, and trade records at swap meets. Through happenstance, Taylor met future business partner Glenn Forbes, who with a $750 investment bought into Boo Boo's. They opened their first brick-and-mortar location in 1974, in what was then the seedy part of town by the railroad station. It also included antiques and plants, as well as art and pottery created by their wives.

"The shop was only 300 square feet," Taylor said, "and I think we were paying $85 a month in rent. Four years later, when we started talking about moving downtown, there was a heated discussion about whether or not we were selling out."

They did move downtown to Monterey Street, near their current location, and over the years the record store grew and grew. They opened another in Grover Beach and closed it many years later to focus on their SLO location, which in 2010 was named in Rolling Stone magazine among the top 25 Best Record Stores in the U.S. They were also listed in a Let's Go California book.

Forbes sold his interest in the store years ago, as did Taylor, to Mike White, who was one of their first employees. Taylor still comes into the store every week to go over the vinyl section, but he now runs his own smaller record business specializing in used LPs and 45s, Back Room Vinyl, out of Pismo Pickers Antiques (537 Five Cities Drive).

While big chains such as Wherehouse Music, Tower Records, and Sam Goody have been relegated to the dustbin of history, Boo Boo Records has survived and thrived thanks to White's guidance and willingness to think outside the music store box. Lifestyle gifts, apparel, collectibles, books, and more have helped keep the business alive, but the real reason Boo Boo's is still going strong is customer service, depth of knowledge, and a great staff, many of whom have been with the store for decades!

"I always told our employees to look the customer in the eye and speak directly to them so they know you're listening, and never judge their taste in music," Taylor said, a sentiment that White seconds.

Still, it's a tough business between direct-to-consumer and online sales—not to mention Spotify and other listening services—but as White noted, "A lot of people want to buy local and they want to hold something in their hands before they buy it."

Yes, Boo Boo Records is a dinosaur, and bless them for it. Their stacks of vinyl records and CDs are amazing, and if they don't have it, they'll do their best to order it. They have a ton of rare used records, as well as brand new vinyl records, which White also credits with keeping a store like Boo Boo's alive. They're also the go-to place for tickets to local music events. 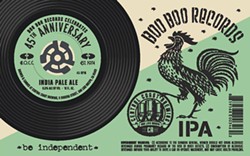 To celebrate Boo Boo's 45 years in business, Central Coast Brewing has created a special India pale ale to commemorate the anniversary, and they're hosting a party on Saturday, Aug. 24, at their 6 Higuera St. location (3 to 7 p.m.; all ages; free). The DJs of Souldust Productions will provide the sounds, and CCB will be offering a special barbecue menu that day as well.

"One of our longtime employees, Ryan East, will be making limited edition T-shirts for the event," White added, also noting that the 45th Anniversary IPA will have a whopping 8.6-percent alcohol, and will be available at CCB as well as at select local bars and restaurants.

Cheers to an integral part of the SLO music scene! Here's to another 45 years! 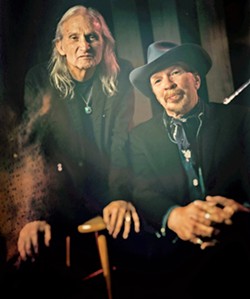 Numbskull and Good Medicine Presents are bringing Dave Alvin and Jimmie Dale Gilmore with The Guilty Ones back to The Siren this Thursday, Aug. 22 (7 p.m.; 21-and-older; $22 presale at Boo Boo's and ticketfly.com). The pair have a terrific new album together, and they brought down the house in June when they headlined the Live Oak Music Festival.

Even though they've been friends for 30 years, it wasn't until 2017 that they decided to—according to press materials—"hit the highway to swap songs, tell stories, and share their life experiences. Though Texas-born Gilmore was twice named Country Artist of the Year by Rolling Stone, and California native Alvin first came to fame in the hard rocking rhythm and blues band The Blasters, they discovered that their musical roots in old blues and folk music are exactly the same."

Ripping guitarist Taylor Scott and his band will open the show with some funk, soul, rock, and R&B.

Relentlessly upbeat dance act The Cheeseballs play The Siren on Friday, Aug. 23 (8 p.m.; 21-and-older; $15 presale at Boo Boo's and ticketfly.com; $20 at the door). They put their own spin on hit songs.

Sometimes a band's bio says it all: "Some years ago, a young collective of extraterrestrials arrived on this planet and happened upon a small college town in Alabama. Home to both otherworldly jazz guru Sun Ra and rocket scientist Wernher von Braun, it is clear that Alabama is a direct linkage to outer space. In order to integrate into human society, these aliens would disguise themselves as a rock band, the perfect vehicle in which to traverse the globe and further their research. They would soon be known to the people of Earth as Man or Astro-Man?"

In the late '80s, the hottest comic on the planet was Andrew Dice Clay and his alter ego, The Diceman—a brash, smarmy, offensive, and hilarious persona, who in 1990 became the first stand-up comedian to sell out Madison Square Garden two nights in a row. Later that year, he starred in the film The Adventures of Ford Fairlane. He was also the only performer ever "Banned For Life from MTV."

Jenny, Jenny who can I turn to? 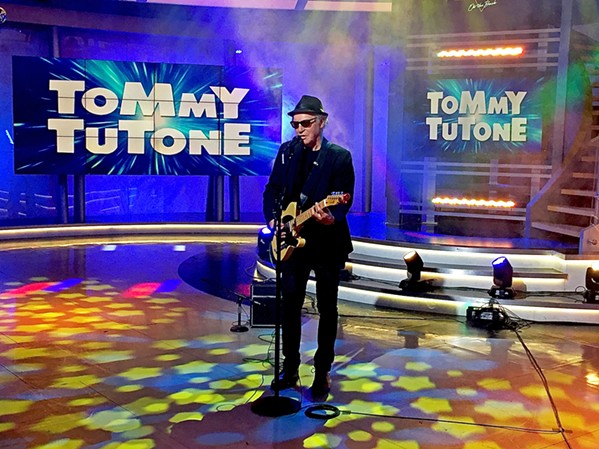 It's impossible to think of top-40 radio and MTV in the '80s without thinking of ZZ Top and songs like "Legs," "Got Me Under Pressure," "Gimme All Your Lovin'," and "Sharp Dressed Man." Get ready to do the time warp when ZZ Top plays Vina Robles on Sunday, Aug. 25 (7 p.m.; all ages; $65 to $135 at vinaroblesamphitheatre.com). 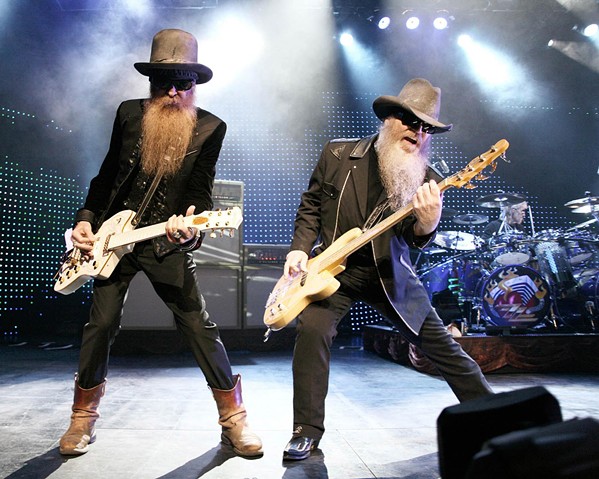 The Rock and Roll Hall of Famers are celebrating their 50th year with a massive North American tour this summer from coast to coast and border to border. Very special guest Cheap Trick will open the show. They, too, have a slew of '70s and '80s hits!

Don't forget the Steve Miller Band plays next Thursday, Aug. 22, at Vina Robles Amphitheatre (7 p.m.; all ages; $59 to $125 at vinaroblesamphitheatre.com), with Americana act Marty Stuart and His Fabulous Superlatives opening.

Kacey Musgraves on Saturday, Aug. 24, is sold out.

Do you like the music of Buck Owens and Merle Haggard? The Arroyo Grande Village Summer Concert Series Presents the James Way Band on the Rotary Bandstand on Sunday, Aug. 25 (1 p.m.; all ages; free). The group pays tribute to the classic Bakersfield country and gospel sound.

The Point San Luis Lighthouse is hosting the first ever Shell Beach Showcase featuring bluegrass act Jasper Creek and Friends on Sunday, Aug. 25 (4 to 7 p.m.; $15 to $400 at my805tix.com). Parking for the event will be at Wild Cherry Canyon off of Avila Beach Drive, near Port San Luis. The lot will open at 3 p.m. to catch shuttle vans to the historic lighthouse. Small-backed chairs are allowed. Δ