The image of a library is generally that of a dour, hushed room filled with dusty, yellowed books, and a stern, bespectacled librarian glaring from behind a desk. In other words: not a very fun environment. But, much like Madonna, libraries are revamping their public image and moving into the 21st century. Guys, it’s not all about books anymore. They’ve got the Internet, and e-books, and video on demand. It’s a whole new world. Also, they’ve got magazines.

And what better way to celebrate this metamorphosis than by attending the events of National Library Week this April? Answer: There is no better way. 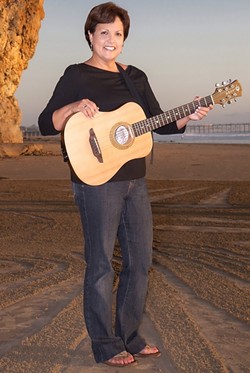 The American Library Association (ALA) first sponsored National Library Week in 1958 in an attempt to save society. Research in the mid-1950s showed that Americans were spending less money on books, and more on radios, TVs, and other time-wasting, brain-melting devices. The ALA and American Book Publishers got together and formed the National Book Committee, dedicated to encouraging people to read more.

The ALA assumed full sponsorship of the event in 1974, when the National Book Committee disbanded, and has since continued the annual celebration every April.

The Nipomo Public Library will kick off the week with a family celebration on April 11. The day will feature live music from local singer/songwriter Diana Lynn Carter and a display of poems selected and illustrated by Dana Elementary School students. Kim Pendleton, the manager of the Nipomo Library, said the event helps spread awareness and appreciation for local libraries.

“National Library Week is a great event because it’s a good chance to raise awareness about the services that libraries provide and the information and entertainment they offer at no charge,” Pendleton said. “It’s a good way to remind people that libraries are here to help.”

Additionally, Pendleton said it’s a way to raise awareness in the community about the Black Gold Cooperative Library system. The public libraries in SLO County are part of the Black Gold Cooperative Library system, which allows people to borrow books from libraries outside of the county—like in Santa Barbara, Santa Maria, or Goleta—and have them delivered to a local library at no cost.

All SLO County libraries will be holding a “Food for Fines,” program to help end hunger in the community. Each branch will accept a non-perishable food item in exchange for $1 off of all library fines. All food items will be donated to the Food Bank Coalition of San Luis Obispo County. There is no limit for how many overdue fines can be covered by food donations, but fees for lost or damaged items will not be included.

Cal Poly’s Center for Coastal Marine Sciences and SLOSEA programs will host an open house walking tour of the Cal Poly Pier on May 16, from 9 a.m. to noon. The event will feature interactive displays with special touch tanks of live marine creatures, microscopes to view smaller creatures, and a “Discover Scuba” experience. Cal Poly professors and students will talk about ongoing research of local marine life, including protecting Morro Bay’s ecosystem, how to sustain local fisheries, and mapping ocean currents on the Central Coast. Those participating in the walking tour are required to wear closed-toed walking shoes. The Cal Poly Pier is located on Avila Beach Drive, just west of the San Luis Creek Bridge. For more information, call 756-6777.