I'm late to the Bosch party, a TV show based on an ongoing series of novels by Michael Connelly. It's got six seasons under its belt with a seventh ready to start, and so far I've only made it through the first. Gotta say though, I'm hooked! The titular character is Hieronymus "Harry" Bosch (Titus Welliver), an LAPD homicide detective whose tenacity makes him highly effective but whose personal code of ethics and penchant for insubordination keeps him at odds with his superiors. 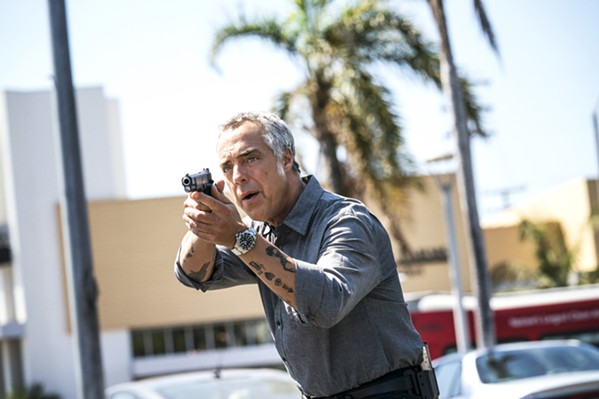 In the first season, Bosch is in hot water for shooting a suspect in what may or may not have been a "good" shooting. Put on restricted duty, he trades shifts without his superiors' permission and ends up with a case of a murdered boy. What follows is his attempt to find the killer in the decades-old case. Meanwhile, a suspected serial killer, Raynard Waits (Jason Gedrick), claims to have murdered Bosch's young victim. Is he telling the truth or is it a sick need for attention? Don't worry, Bosch will get to the bottom of it, let the chips fall where they may.

This is a gritty police procedural with an engaging lead character and enough side plots and twists to keep things interesting. (60 51-min. episodes.) Δ