Though the San Luis Obispo and Morro Bay Fire departments saw many of their rank assisting other departments throughout the state battling blazes, each sent a firefighter to the Otay Mesa California border, where they crossed in a donated 1983 Mack fire engine on July 27. 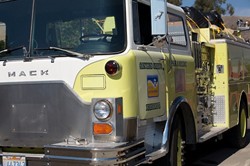 The donation was in line with a long tradition of brotherhood between Central Coast firefighters and their comrades in Latin America. The 1983 Mack is the fifth fire engine donated to Mexico by the city of San Luis Obispo. The engines are no longer able to operate in California due to age restrictions and liability issues but they rank as the newest engines for putting out fires and saving lives south of the border.

"We have been donating engines since the early '80s," James said. "It started through a California program called Los Bomberos. These donations make a big difference to fire departments in Mexico." ?