It was one hell of a city council meeting Tuesday night in Atascadero. Opponents of Wal-Mart waged a battle against city staff and firefighters over a proposed Superstore at the intersection of El Camino Real and Del Rio Road. Approximately 550 citizens attended the special meeting held to discuss rezoning portions of the project from residential to commercial. Staff and council also attempted to explain how negations had proceeded for three years behind closed doors. 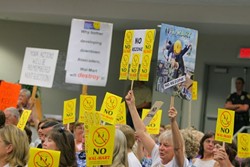 # formal and informal meetings with the developer The Rottman Group and possible retail stores. Though McKinney had stated in a memo on May 18 that â€œcity staff has not met with Wal-Mart officials,â€? he admitted that he had spoken with a Wal-Mart official in September 2005 and that Assistant City Manager Jim Lewis and Redevelopment Director Marty Tracey met with officials from Wal-Mart in May 2005.

Mayor Oâ€™Malley and representatives of the developer said that the purpose of Tuesday nightâ€™s council meeting was not to debate Wal-Mart, but to discuss rezoning and the tax benefits of the project. However, representatives of the Rottman Group said that Wal-Mart is the only viable anchor store interested in coming to Atascadero at this time and without the superstore, smaller desirable retailers would not set up shop in Atascadero.

Opponents of Wal-Mart carrying signs and donning anti-Wal-Mart T-shirts, lined up next to pro-Wal-Mart firefighters to voice their opinions during the public comment portion of the meeting. Mayor Oâ€™Malley attempted to reduce the speaking time from five minutes to three minuets. He was unsuccessful.

Of those speaking, 45 were opposed to rezoning the property without first passing an ordinance against a Super Wal-Mart. There were nine speakers in favor of rezoning, seven of whom are employed as city firefighters. â€œI am appalled to see firefighters coming in with hats in hand asking for financial assistance,â€? said Atascadero resident Randy Lawrence. â€œI am a trauma surgeon and I work hand in hand with them.â€?

Luna plans to vote against rezoning until it is decided if a Super Wal-Mart will be included in the development. Councilman Jerry Clay plans to vote in favor of Wal-Mart and rezoning. â€œI represent the entire city, not just 45 people,â€? Clay said as those present voiced their dismay. Oâ€™Malley says he wants to wait to hear from more of the public before making a decision. Councilwoman Becky Pacas left the meeting at 9 but left behind a statement for Oâ€™Malley to read. It never was.

Former mayor and councilwoman Wendy Scalise wasnâ€™t there at allâ€”she resigned May 29 citing health reasons. The four remaining council members have 30 days to appoint a new member, call a special election, or wait for the November election. Ellen Baraud finished fourth in the last election and is a likely candidate for appointment.