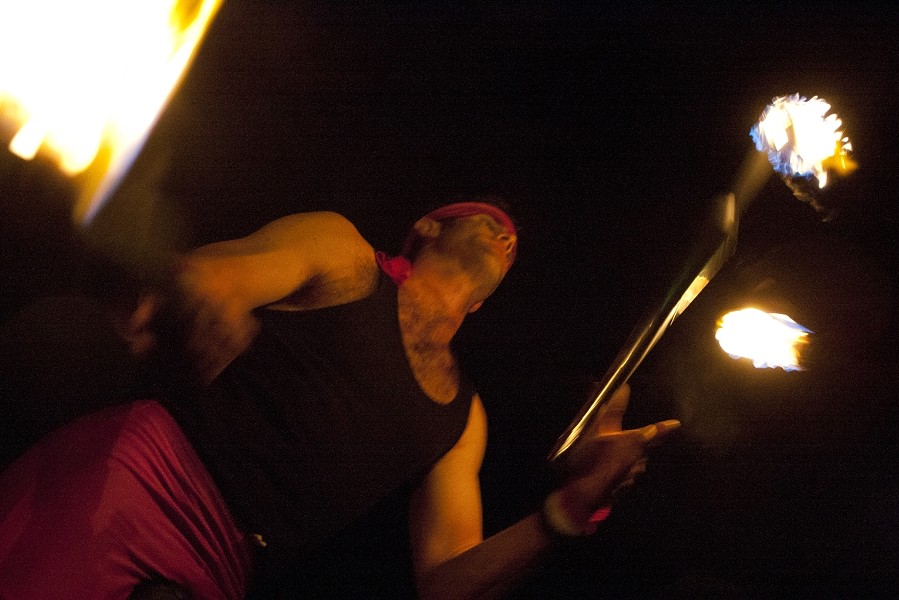 Tucked away on a dead-end street in an industrial park, there’s a carnival atmosphere at Box City. People clamber from one themed Meathead Movers van to another.

My first stop is the Japanese teahouse truck, where I kneel on the floor as a kimono-clad Amy Asman, a staff writer for the Sun, our sister paper in Santa Maria, serves me tea and wasabi-coated peanuts. Lit with tiny tea candles and Japanese lanterns, with fresh bamboo shoots decorating the wall, it feels nothing like sitting in a moving van. It would almost feel relaxing—except a guy in a gorilla suit wearing an orange safety vest is sitting across from me, glaring.

“You guys couldn’t find a panda costume, huh?” I ask.

“We gave up on pandas,” grunts the gorilla, whose name is Bo.

I finish my tea and saunter over to another truck filled with Cal Poly wrestlers, as well as Meathead Movers co-owner Aaron Steed.

“Hmm. It’s starting to smell like a gym in here,” I say as a couple of grapplers go at it, slamming each other against the padded floor of the van.

“And yes, we do have insurance,” quips Aaron as one of the wrestlers careens off the wall after a particularly hard takedown.

I get to the collaborative art truck just in time to see Julian Smalls stringing colorful Christmas lights, and I’m there when he adds the last string, blowing the fuse as the truck goes dark. Even so, I jump up into the truck, grab a paintbrush, and attack the virgin canvases tacked to the van walls. By the end of the night, I imagine my contribution will be wholly obscured by subsequent “artists,” but for now my mark remains.

Off I go to the movie truck, which is screening Barbarella, the 1968 Jane Fonda cult classic. The popcorn maker is shooting sparks, threatening to burn the joint down, so I hop out and head to the KCPR dance party truck, which is really thumping. 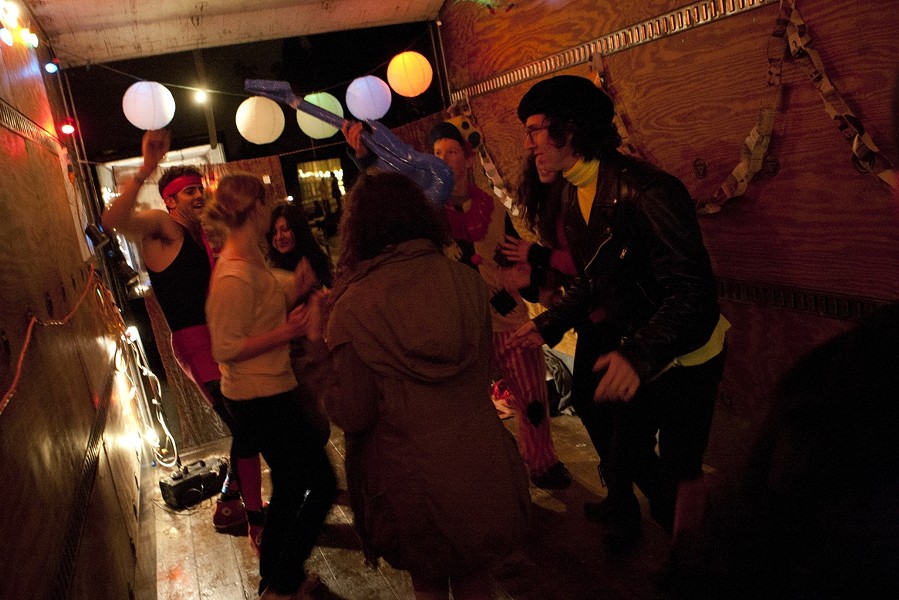 I’m just wandering around when I see New Times photographer Steve Miller telling Schwellenbach she should have parked the trucks downtown.

She’s such a potty mouth! But she’s right. Part of what makes Box City cool is that it requires some effort, but the payoff is awesome. I mean, come on! Did you see a fire-juggling unicyclist on Friday? I didn’t think so.

There are two more Box City events: March 25 and April 1. Watch New Times for details and then be prepared for something super awesome!