Troy Knox moved from New York to Los Osos one year ago, and promptly began painting his own interpretation of local land and seascapes. When he assembles his dozens of multi-sized works in his studio—across the floor and walls, and propped against the furniture—he quickly runs out of space. Thus far, his hectic production pace has been solely linked to his desire to paint; he hasn’t exhibited locally, and has shown his work to few people. This isolation is coming to an abrupt end in August, when he exhibits his landscapes and seascapes at Neal Breton’s shop, San Luis Art Supply.

The exhibit is a fundraiser, and prelude, to an even greater expedition. After reading the New York Times’ coverage of the April 20 British Petroleum oil spill, and specifically seeing the photographs of pelicans entombed in oil, Knox decided to drive to Louisiana and apply his love for painting land and seascapes to the decimated Gulf of Mexico coastline. Knox recognized the power—and horror—of those photographs, and wanted to tap into the well of expressive potential. 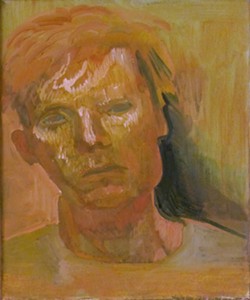 “I’ve been kind of a hermit,” he admitted. “I’m ready to apply it to something. I’m interested in nature, and there’s a lot of nature here, but it’s not what’s going on in the world. It’s kind of isolated.”

The painter’s preferred method of operation requires being outside. He doesn’t paint from photographs, and though he paints from his studio when there isn’t sufficient light outside, his studio paintings are another genre of work entirely. He occasionally travels to Avila Beach or Morro Bay to work, but the Sweet Springs Nature Preserve is mere blocks from his house and he’s a frequent visitor, with canvas and paint in tow.

Though Knox isn’t terribly concerned with labeling his work, he acknowledges his nature paintings are plein air, categorically at least. It’s not a genre of work you’d expect to find at San Luis Art Supply, but Knox’s work doesn’t meet traditional expectations of plein air painting. His images are dominated by blue; he likes that the color is both melancholy and bright at the same time. And he reckons, half-jokingly, that we’ll all be underwater soon anyway, so we may as well adapt ourselves to the hue.

Unlike the plein air painters who strive only to record what they see, Knox puts his own stamp on each scene. One watery expanse burns red in the grip of some fiery apocalypse or sunset. In another, a turquoise sun governs a seascape where yellow sea and sky are indistinguishable from one another.

“To do a painting purely of what you’re seeing is ridiculous,” said Knox, who went on to say that painting is a medium with many elements, and the perspective of the artist is key. “Some of these paintings I’ve been doing kind of mock that aesthetic. I don’t want to be a sarcastic artist, but it was kind of fun to do.”

The result is often ethereal and otherworldly, which makes sense in light of the fact Knox sometimes feels as though Los Osos is part of another planet. The industrious fog is always rolling in or out, and the wind is often an unfriendly element to plein air painters. Knox employs video as a tool to capture moments that might serve as inspiration—birds, reflections in the water. Another factor to painting en plein air is the people, who often stop to peruse Knox’s work. It would be difficult to spin their response as positive. But that hasn’t dampened his excitement and curiosity about the reaction to his show.

“Most of the time they look really puzzled and they walk off. Or they don’t know what to say,” admitted Knox. “Like they were expecting something different.”

One week after the show concludes, Knox intends to depart for the Pelican State, hopefully with pockets stuffed with cash from the sale of his reasonably priced paintings. He’s leaving behind the printing job he holds down to pay the bills, and the fog-riddled town that served as a back-to-nature haven for the city boy. The duration of his Louisiana adventure is undetermined, as yet. The one thing that’s certain is that he’d like to devote more of his attention and time to painting, preferably as a career.