Brasserie SLO is located at the new boutique Hotel Cerro, at 1125 Garden St., between Marsh and Higuera streets in downtown SLO. The Mediterranean-inspired, contemporary-Californian meals are served all day, including Sunday brunch. Make a reservation (only for parties 8 or more) at (805) 592-3880. Life of Pie, an in-house bakery offering fruit, nut, cream, chocolate, and savory pies, will be open soon, next to the Spa Cerro on Marsh Street. Visit hotelcerro.com/slo-restaurants/brasserie-slo for more info.

Brasserie SLO, which opened in January, just brightened up the darling, romantic Parisian-like Garden Street. Walk by the lively al fresco patio and you'll feel like you're in the heart of a busy metropolis, not a little college town.

To make this situation even better, Hotel Cerro's owners have brought us one of the most exciting chefs around: Executive Chef James Anderson. His style is distinctly Mediterranean, combining flavors from all the countries that dip their toes in the Mediterranean Sea: a good bit of Provence, a nice slice of Italy, the most pleasing parts of Greece.

Wild-foraged mushrooms, seaweeds, fresh fish and oysters, and duck breast are huge on his menu, which waxes and wanes seasonally. Anderson brought some of his favorite vendors from Monterey County, but he made his own friendships with SLO's farmers and ranchers. He is one of those chefs who is the first to arrive at the downtown farmers' market to see what's fresh.

What he does with those items makes his menu exciting: carmelized onion soup and mouthwatering Santa Carota grass-fed beef Brasserie Burger for lunch, and Morro Bay oysters by the half dozen and hearth-fired Shakshuka eggs for brunch.

Chef Anderson began cooking at the early age of 15 when he was a wrestler in high school in Redondo Beach, where he was born and raised, and would cook for his hungry pals with whatever he had in his kitchen. Cooking was just a hobby at the time. His friends told their moms about how much they loved his cooking, and soon Anderson was cooking meals for his friends' mothers too. He took an internship for a chef in an industrial kitchen while still in high school until a turning-point summer he spent in Bordeaux, France.

His first meal there was a plate of steak tartare. Before then, he had never eaten anything raw.

"I grew up in Southern California. I grew up eating chicken and tacos ... and Chinese food," he said.

"I was living off nothing but paté and slicing ham off a bone, and it was nothing I'd ever been exposed to in my life, and it was very influential in that sense," he said. "I can still taste everything."

Anderson moved to Northern California at age 18 to attend the San Francisco California Culinary Academy (since renamed), a branch of Le Cordon Bleu College of Culinary Arts. His first job was at Absinthe Brasserie & Bar in the city. Anderson would spend the next decade in Monterey County, working his way up in restaurants like Roy's at Pebble Beach, and Bistro Moulin in Monterey. He went on to chef positions at Casanova Restaurant in Carmel and La Bicyclette in Carmel, and even opened his own place: The Poke Lab in Monterey, which focused on sustainable fish in a partnership with the Monterey Bay Aquarium.

For Anderson, it's all about root to fruit, head to tail.

All the suites at Hotel Cerro face a beautiful edible garden and rooftop orchard tended to by "avent-gardener" Annette Pollock. You'll find that the garnishes and citrus at Brasserie SLO come from this veritable Shangri-la, and be watchful for chef's fig creations when the figs are in season.

Next door is Hotel Cerro's own distillery. Across the street is the newly opened Spa Cerro, next to a (soon-to-be) grab-and-go Hotel Cerro bakery called Life of Pie. If you have the chance, go and see the living walls and inhale the fresh mint and geranium flowers and take a stroll through the new, long-planned boutique Hotel Cerro on Garden Street.

We visited on a weekend, and early in the evening, the place was packed with locals. The decor is brick walls and bold modern lighting, white marble tabletops, and a snazzy, see-and-be-seen bar. It was pleasant to see some glamorous outfits. This is a place where you can wear those sexy heels or Thurston Howell III ascot. Or not. I mean, this is SLO Town after all—come as you are.

Besides, typical French brasseries are by definition informal. "Brasserie" means "brewery," so in addition to small plates, flatbreads, shares, grains and veg, and main dishes, the menu features Firestone Pivo Pils, SLO Brew Hazards Haze, Libertine Blue Ocean Gose, and so more. Cocktails include a 1738 Sazerac for those who love New Orleans, and a handful of ultra-creative, hilariously named signature cocktails that involve everything from shiso persimmon shrubs to elderflower tinctures.

For our evening, my husband and I agreed to begin with the champignon pizza. The crust was to perfection: thin enough with those lovely charred spots. And it was topped with heavenly black truffle pecorino, with every inch of the pizza covered in a mélange of foraged mushrooms, thyme, and caramelized onions. 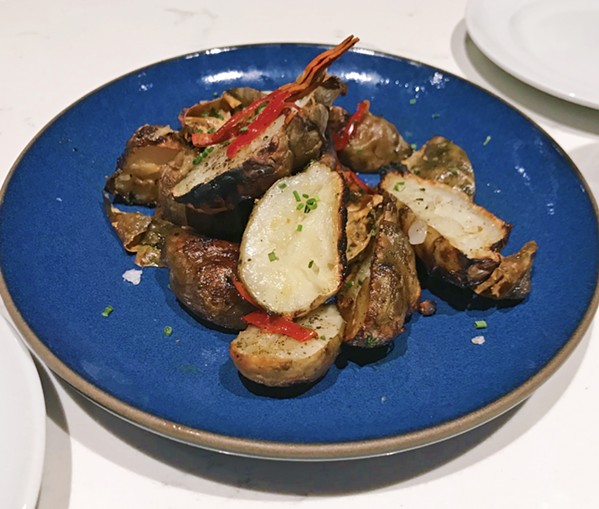 We were told the dinner menu works best with sharing, so we began with hearth roasted sunchokes, a thin-skinned, cold-season root vegetable of the sunflower plant family, which tasted like ultra-fresh, earthy potatoes. Chef Anderson cooks them in oak embers and flavors them skillfully with thyme, sunchoke granola, and crispy Calabrian chili strips.

For our main dish, we had to have the fresh catch: the steelhead trout, oak-grilled in a citrus butter sauce. Every bite was expertly balanced, with flavor-packed charred greens and blood orange slices that enriched every bite of fish.

Bagley-Rowe shared that the champignon pizza was the impetus for bringing chef Anderson from Monterey County to SLO. Resort and hotel property owners Beverley and Shaun Matthews, who were developing Brasserie SLO in their hotel, were dining at La Bicyclette in Carmel, where Anderson was working as chef de cuisine.

Beverley Matthews said she didn't care for white pizzas, but chef Anderson challenged her to try it—"'Ma'am,' he said, 'if you don't love it, I'll make you anything else on the menu,'" Bagley-Rowe told me.

It's no surprise Beverley loved it so much that when she and Shaun were working on operations at Hotel Cerro and Brasserie SLO, she said they must recruit the chef who made that most memorable pizza. Δ