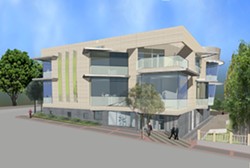 Sitting in her basement office, SLO Art Center Director Karen Kile needed both hands to hoist a red binder, more than a half-foot thick, off a shelf for a visitor. It contained the planning documents for the new modernist building the city is considering as a replacement for the current center. She smiled.

“I thought this would be quick,” she joked of the approval process.

According to a SLO City staff report: “There are no comparable buildings in SLO.” The closest thing, aesthetically, to the proposed SLO Art Center might be the newish County Government Building next to the Freemont Theater on Monterey Street. Even that building seems downright passé compared to the planned Art Center with its conical atrium juxtaposed against hard edges and jutting windows. The art center is modern, it’s green, and some critics have argued it’s not SLO. Kile, however, thinks the new building’s time has come.

On Feb. 17 the design, which has been more than a decade in the making, is scheduled to go before the City Council for conceptual approval. If it’s accepted, then Kile can start moving into what she called “Phase II,” working out the last kinks with the city. She can also begin fundraising, and start the process of producing construction designs.

The design first appeared before the city as a concept drawing in 2002 and since then it has bounced between the Cultural Heritage Committee, the Architectural Review Committee, and the council, whose members voted to change the zoning to accommodate a larger building.

If approved, the design would more than triple the floor space of the gallery, which sits at the creek’s edge in the heart of SLO’s downtown historic district. The new three-story—plus a basement—structure would completely replace the old building, a 1950’s flat with additions made in the ’60s and the ’80s. It wouldn’t increase the actual footprint much, but several trees would likely have to go to make room. Kile said the Art Center could use the space to hold more adult education classes, more lectures, more exhibits, a library, and display art from their permanent collection.

“The gallery size would be about the same—a little bigger,” Kile said, “and it would be mirrored with another one right above it.  Not only will we be able to show the things we’ve always liked—local art—but now there’s no reason we can’t show anything we want.”

Objections to the building are varied. Critics say that, at 50-feet-tall at its tallest point, it’s too big, especially in the context of its historical surroundings. They say it’s not pedestrian friendly—one wall facing Broad Street is envisioned as a dark, rock façade to mimic Bishop’s Peak. In its defense, Kile notes plans call for four medium-to-small windows along that stretch. Most importantly, however, critics say it’s simply too modern and would not fit in among its neighbors, which include the Mission and the Carnegie Library, arguably two of the most historically significant buildings in town.

“It’s not a monolith at all,” Kile said. “It has a lot of windows for a gallery space.”Save our Downtown, a group that formed in the wake of several large projects in downtown SLO as a sort of development watchdog group, has been critical of the project. Allan Cooper, representing the group, said in an email that members still have concerns.

“We applaud the Art Center’s outreach efforts to the community, but still harbor significant reservations about the scale and height of the project and its impact on access to sunlight and views, particularly within such a sensitive context.”  At least one committee member, however, suggested during a Nov. 26 Architectural Review Committee meeting that the architectural contrast between the historic and contemporary structures could strengthen the historic character.  That’s a hard sell for some.

Kile, for her part, is determined to see it built. She’s waited ten years already, so what’s a few more?

Staff writer Kylie Mendonca can be reached at kmendonca@newtimesslo.com