New Orleans has Mardi Gras, but Brazil has Carnaval, also traditionally held the Tuesday before Ash Wednesday, which marks the beginning of Lent, the 40-day period of self-denial before Easter Sunday. Because Roman Catholics and some Christians forego meat consumption during some days of Lent, the name Carnaval (that’s the Portuguese spelling) comes from carnelevare (to “raise meat”). Think of Carnaval as a last hurrah before a 40-day period of abstaining from all the things you like but will deny yourself. It’s one last chance to gorge!

Now, technically speaking, Fat Tuesday isn’t until March 4, but hey, that doesn’t mean you can’t get the party started early, which is what SLO Brew is doing this Saturday, Feb. 8, when SambaDá performs (7:30 p.m.; all ages; $10 presale or $13 at the door).

The septet formed in 1998 in Santa Cruz and quickly became the premier West Coast Carnaval band led by native Brazilian and capoeria master Papiba Godinho (for those who don’t know, capoeria is the Brazilian martial art that combines elements of dance, acrobatics, and music). The band was injected with another dose of authenticity when another native Brazilian, singer and dancer Dandha de Hora, moved to Santa Cruz in 2005 and joined the band.

When they play SLO Brew this weekend, they’ll be joined by some guest samba dancers, making this a feast for both your eyes and ears! SambaDá band members say they “work and play for social justice, peace, and the respect of all cultures and peoples.” They’ve released two albums, 2007’s Salve a Bahia and 2010’s Gente. On both records, you can hear how they stay true to their folkloric roots while blending in elements of American funk. It’s pretty freaking impossible not to shake your groove thing when you hear these sounds! 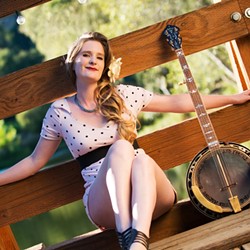 “The Long Memory: Remembering the Songs and Stories of Bruce ‘Utah’ Phillips” with Utah’s son Duncan Phillips, Erin Inglish, and Ranchers for Peace happens on Wednesday, Feb. 12, at Linnaea’s Café at 7 p.m. (a suggested donation is between $4 and
$20 depending on how rich or generous you are; no one will be turned away).

“Along with Utah’s old road-worn Guild guitar, Duncan inherited the songs and stories of the people and places that his father wrote about over his 40-plus-years of wandering the country,” according to concert organizers.

In Duncan’s own words, “Well, even though he may be gone, every time I’m on the stage, he is there with me and this is my story, so far.”

“California banjo sweetheart” Erin Inglish, like the late John Hartford, is a solo act with a voice, a banjo, some body percussion, and poignant songs. She’s known for touring the West Coast on her bicycle! She’s also one of the pinups in the Banjo Babes 2014 Calendar & Showcase Album.

Ranchers for Peace is a father-daughter duo from Cambria, well known for their socially conscious songs. One in particular, “Walkin’ Around Black,” was written after Trayvon Martin’s death. 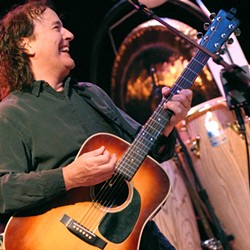 “John Batdorf is one of my favorites,” said Bonnie Nelson-Key, one of the organizers of the Songwriters at Play showcases. “He’s also a man of many careers. In the ’70s he recorded with the bands Silver and Batdorf & Rodney, and toured the U.S. and Canada. He later became a writer for America, England Dan, and Kim Carnes, and sang on hundreds of jingles, movies, and TV shows. Now he’s returned to touring and recording—his fourth solo CD is One Last Wish. And he just released Soundtrax 2 Recovery, a collection of new originals to inspire recovering addicts.” John Batdorf headlines the Shell Café showcase on Thursday, Feb. 6 (6:30 p.m.; all ages; free). Learn about all the series weekly showcases at songwritersatplay.com.

Reggae act Morgan Heritage plays SLO Brew on Thursday, Feb. 6 (8 p.m.; all ages; $16 presale or $18 at the door). The group known as the “Royal Family of Reggae” has been at it for nearly two decades and released 10 albums, playing roots reggae promoting love, dignity, respect, and praise for Jah. Local reggae act Resination opens the show.

The Sindicate, a Portland-based alternative reggae band, has shared the stage with Slightly Stoopid, The Wailers, Streetlight Manifesto, Fishbone, and many more. “We’re proud to say that we will be releasing Sasquatch, our upcoming EP featuring members of Slightly Stoopid, releasing it for donations only at the Frog and Peach on Thursday, Feb. 6,” said front man Dominic Bianchini. The show starts at 9 p.m.

Ready to channel your inner Phantom of the Opera? On Friday, Feb. 7, between 6 and 9 p.m., Art After Dark patrons are invited to hear the Forbes Pipe Organ played by various community members, and are even encouraged to sign up and play it themselves. Cal Poly University Organist Paul Woodring will be on-site for the duration of the evening to help acquaint players with the complex instrument prior to each mini-performance. Sign up to play the Forbes Pipe Organ at the Open Keyboard by contacting PAC Outreach Services Specialist Melody Klemin at 756-7223 or mrklemin@calpoly.edu; limited sign-up space available. 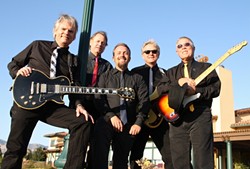 Great Irish-American rock act the Young Dubliners return to SLO Brew this Friday, Feb. 7, (7:30 p.m.; all ages; $15) to deliver a night of Celtic and American rock. Said frontman Keith Roberts, “The sound was always intended to be a hybrid because we all come from different backgrounds. Even though two of us are from Ireland, a lot of the music we listened to growing up wasn’t Irish at all, but when we got here, we got homesick and developed a new appreciation for Irish music. In truth, the Celtic riffs can just as easily come from the American band members. Everyone writes now so you never know what you’ll end up with when you start on a new album.” Santa Barbara-based folk rock act Erland opens the show. Fronted by Erland Wanberg, the band will remind some of The Lumineers and Wilco. They’re touring in support of their debut album On Our Side. Check out their video for “My Love” on YouTube. These guys have a really engaging sound.

Want to learn to shred like Travis Larson? Well, forget it! It’s impossible! What? You refuse to give up? OK then. I like your spirit! Get thee to Music Motive this Saturday, Feb. 8 at 1 p.m. when Music Motive presents Travis Larson in a free guitar clinic, featuring bassist Jennifer Young. Travis is a local prog-rock fusion guitarist, presenting technique, style, and musicality.

Titled “A Night at the Mission,” expect performances by a string quartet, saxophone quartet, flute quartet, clarinet ensemble, trumpet ensemble, brass choir, brass quintet, and woodwind quintet. Tickets are $9 for students and senior citizens and $12 for the public (call 756-4849). 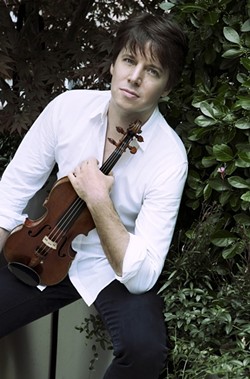 Was it really 50 years ago that Ed Sullivan had a “really big shoe for you tonight” when he presented The Beatles in their first American performance on Feb. 9, 1964? Yes, it was! And who better than ’60s retro band Unfinished Business to celebrate the milestone? Jim Witt (bass and vocals), David Hollister (drums), Ben Davis (guitar and vocals), Thomas “Toes” Cuffe (keyboards), and Ed Miller (guitar and vocals) will play Mongo’s on Saturday, Feb. 8 for an evening of all things Beatles. Special guest artists include Dudley Gimpel (Ernie Ball’s guitar designer to the stars and a member of the Mojo Combo), Terry Lawless (keyboards and programmer for U2 and Pink), Liv and Rob (featuring Rob Crisp of the Crisptones), and The Mooks! The cover is $5 and the show starts at 8 p.m.

Nashville indie folk-rock duo You Knew Me When is 18-months into an ongoing tour to promote their debut album You, Me, and the Rest of the World, and this Saturday, Feb. 8, they’ll swing by Luna Red at 10 p.m. The husband and wife duo’s sound “parades between a fusion of progressive indie-rock and folky compositions all infused with a myriad of pulsing and stirring beats,” according to their press materials.

Tony Balbinot is an American classic—rail thin, pompadour hair, and a great singer and guitar player who favors vintage equipment for his roots sound. The front man for the Cadillac Angels has released so many albums I’ve lost count, and he tours relentlessly. If you want a taste of 100 percent American rock ’n’ roll, head to Frog and Peach on Saturday, Feb. 8, at 10 p.m. then get ready to rumble!

Joshua Bell, referred to as the “poet of the violin,” will enchant audiences with “his breathtaking virtuosity, sheer beauty of tone, and charismatic stage presence” this Sunday, Feb. 9, at 7 p.m. in the Cohan Center. Celebrated pianist Sam Haywood accompanies him in a program that includes Beethoven’s Violin Sonata No. 10, Op. 96; Stravinsky’s Divertimento for Violin and Piano (after “The Fairy’s Kiss”); Bach’s “Chaconne” from Partita No. 2 in D minor, BWV 1004, as well as works to be announced from the stage. Student and adult tickets range from $35 to $90 (call 756-4849 or visit calpolyarts.org).

Award-winning traditional Irish flute player and vocalist Hanz Araki will be joined by Dallas Texas based guitarist Joseph Carmichael and vocalist and bodhrán player Colleen Raney for a concert this Tuesday, Feb. 11 at 7:30 p.m. in Painted Sky Studios in Harmony. Tickets are $20 (927-8330).

If you haven’t made Valentine’s Day plans, may I recommend a romantic five-course dinner at Hush Harbor and music by The Monroe? You’ll enjoy lobster bisque, seared Mano de Leon scallop, beef Wellington, exotic cheeses, and a decadent dessert prepared by Chef Ryan Sims, and some amazing music by one of my favorite local performers. Seating is very limited on Friday, Feb. 14, once at 6:30 p.m. and a second seating at 8:15. Call 460-0541.