Like a lot of his fans, I "discovered" Seu Jorge when he played Pelé dos Santos, the acoustic-guitar-playing David-Bowie-cover-singing member of the Calypso crew in auteur Wes Anderson's 2004 Jacque Cousteau comedy homage The Life Aquatic with Steve Zissou. 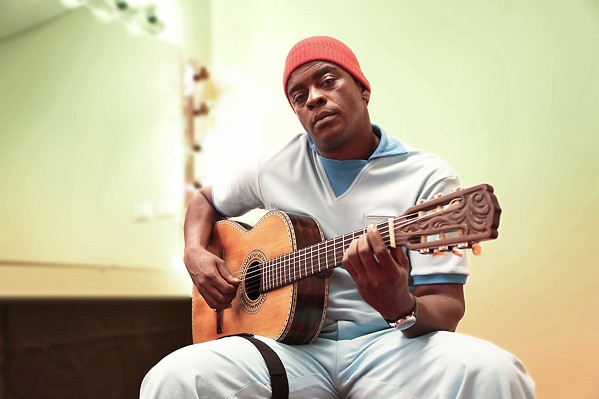 Seu Jorge's renditions of "Starman," "Rebel Rebel," "Rock & Roll Suicide," "Life on Mars?," and "Five Years" were instantly charming, and Bowie himself said, "Had Seu Jorge not recorded my songs in Portuguese, I would never have heard this new level of beauty which he has imbued them with."

He's had quite a life, born Jorge Mário da Silva in 1970 in Belford Roxo in Rio de Janeiro. He knew early on he wanted to be a musician, and he'd often attend dances and sing in the streets. He left home at 19 and became homeless for three years, yet he became well known in the ghetto-like favelas that nurtured his talent. Around this period, he also discovered theater.

Famed clarinetist Paulo Moura eventually found Seu Jorge and gave him his first professional shot, and his life has never been the same. In 1998, as part of the band Farofa Carioca, he fist recorded his songs on the album Moro no Brasil. His first solo album, Samba Esporte Fino, was released outside Brazil under the name Carolina in 2003, but his next solo album, Cru (which means "raw"), was released in 2005 hot on the heels of his appearance in The Life Aquatic.

He's been working in music and film ever since, and a quick look at his film bio reveals three film appearances this year as well as the lead in a film called Marighella, which is filming now.

He's got an amazing voice and a cool, laid-back style, and claims Stevie Wonder as a major influence. I can't wait to see this one!

Also coming up at the Fremont is The Milk Carton Kids on Thursday, June 28 (8:30 p.m.; all ages; $30 to $50 at eventbrite.com and Boo Boo's). This is a terrific indie folk duo that performs beautiful, harmony-rich vocals, beautiful melodies, with wonderful guitar playing from Kenneth Pattengale and Joey Ryan. Each of their four albums is brilliant, and they released the first two for free!

Tribute city and a party in the plaza

Numbskull and Good Medicine Presents have two tribute bands lined up this week, starting with Led Zepagain at Presqu'ile Winery on Friday, June 22 (doors at 5:30 p.m.; all ages; $25 presale at ticketfly.com or Boo Boo's, or $30 at the door). This Led Zeppelin cover act has been a SoCal fixture for 15 years, and they even received the seal of approval from Zep guitarist Jimmy Page, who saw them in 2004 and commented, "It's amazing how much you sound like us. You must have grown up on this because you were inside the music, and you paid attention to detail in your presentation. I can tell you guys really love the music!"

The Police Experience plays Saturday, June 23, at The Siren (8 p.m.; 21-and-older; $16 presale at ticketfly.com and Boo Boo's or $20 at the door). This Police tribute band delivers "the ultra high-energy show The Police were known for in the 1980s," according to press materials, and Police drummer Stewart Copeland praised the band, saying, "every nuance, all the drum parts, and the singer has Sting down to a T." 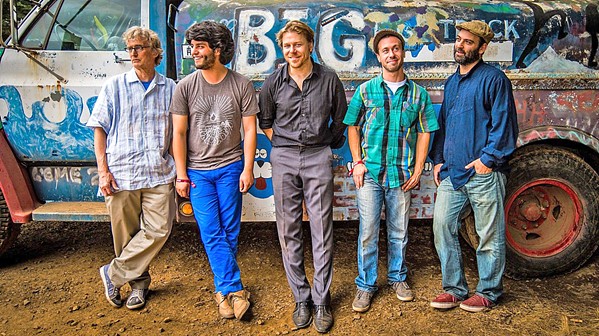 Numbskull and Good Medicine also have an outdoor show at SLO's Mission Plaza scheduled for next Thursday, June 28, when The California Honeydrops play (5:30 p.m.; all ages; $20 presale at ticketfly.com or Boo Boo's, or $25 at the gate). This Bay Area R&B, funk, Southern soul, Delta blues, and New Orleans second-line band puts on a crazy-good live show!

Nobody plays the bass like Les Claypool, who taps, slaps, flamenco-like strums, and whammy-bar bends notes in all directions. He went to school with Metallica guitarist Kirk Hammett, who got him a tryout with Metallica after bassist Cliff Burton died, but frontman James Hatfield didn't give him the job because he was "too good" and "should do his own thing." 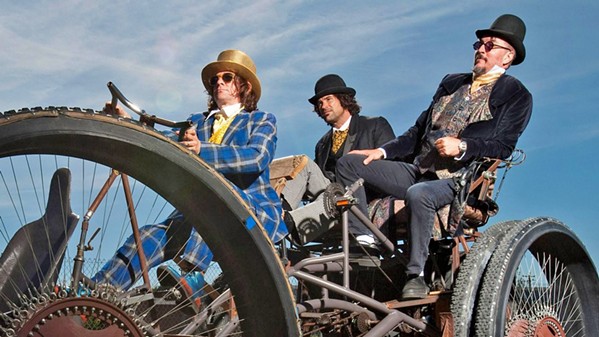 His own thing turned out to be Primus, which released its startling debut Suck on This in 1989, followed by four more outstanding studio albums: Frizzle Fry, Sailing the Seas of Cheese, Pork Soda, and Tales from the Punchbowl.

If you watch South Park, Primus recorded the banging weirdo theme song. There have been personnel changes over the years, a hiatus or two, but to me, the band has always been Claypool delivering his patented alt-metal, funk-metal, experimental, and progressive rock.

Primus and co-headliner Mastodon play the Avila Beach Golf Resort next Thursday, June 28, in a beach concert brought to you by Otter Productions Inc. (gates at 5 p.m.; all ages; $40 to $249 at eventbrite.com).

Celtic rockers Young Dubliners play Concerts in the Plaza this Friday, June 22 (5:30 p.m.; all ages; free), in SLO's Mission Plaza. Formed in LA in 1988, the group is led by Keith Roberts, who several years ago moved his family to the Central Coast. If you like The Pogues or The Waterboys, you'll dig them!

Steve Poltz headlines the For the Folks Summer Solstice show to benefit ECOSLO on Friday, June 22, at Bang the Drum Brewery (doors at 6:30 p.m.; all ages; $10 at eventbrite.com), with the Cimo Brothers opening. Poltz delivers unforgettable troubadour stylings. The Canadian singer-songwriter is perhaps best known as a founding member of The Rugburns and for his collaborations with Jewel. 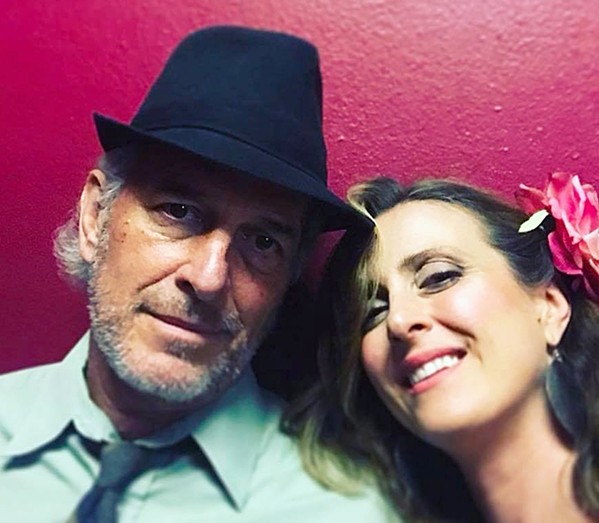 Troubadour Jody Mulgrew, who grew up on the Central Coast but now resides in SoCal, will be joined by Ojai's Smitty & Julija for show at The 4 Cats (formerly the Steynberg Gallery) this Friday, June 22 (7 p.m.; all ages; $15 with reservations by calling (805) 547-0278). This should be a great evening of singer-songwriter fare!

Scott Cooper, formerly of the Grateful Dead tribute act China Cats, has retooled his band the Barrelmakers and is returning to the Central Coast for two gigs. "We replaced our lead slide player with guitarist Fred Rodriguez from Three-Legged Dawg, we changed the name of the band to Rosebud, and are now playing more Grateful Dead material, mixed in with my originals. Everyone's happy," Cooper said. See them this Friday, June 22, at Barrelhouse Brewing (5:30 to 8:30 p.m.); and Saturday, June 23, at Peachy Canyon (1 to 4 p.m.).

The Midnight Rose Jazz Band from Wallace, California, and The Voodoo Doodads from the SLO area will play hot jazz this Sunday, June 24, at the next Basin Street Regulars show at the Pismo Beach Vets Building (1 to 4 p.m., with an 11 a.m. jam session for those who want to arrive early and play; all ages; $10 at the door). Expect great swing music and New Orleans styles from the early days of jazz.

International reggae artist Nattali Rize will make a stop at SLO Brew on Monday, June 25 (8 p.m.; 18-and-older; $15 at ticketweb.com), before continuing on to the Sierra Nevada World Music Festival. Jamaican singer Kelissa will open for Rize and her band. 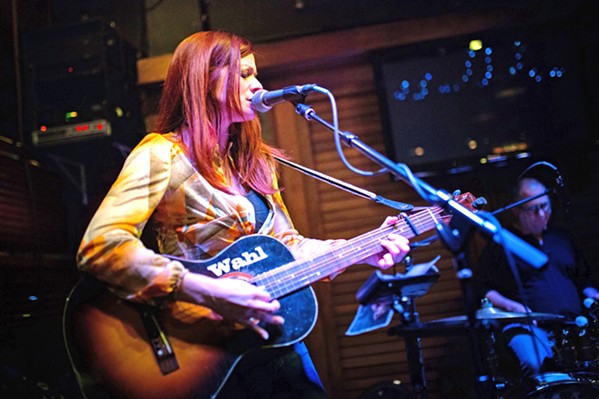