You can order bread for pickup at slobreadbike.com or join the Community Supported Bakery (CSB) as a weekly or bi-weekly subscriber. All breads are delivered by bike the day they are baked. Santa Maria-based Blosser Urban Garden organic veggie and fruit CSA can add a loaf of their weekly rustic bread to their box. Sign up with promo code breadbike to get $10 off your first delivery. Bread bike is located at 570 Higuera St., SLO. Call (707) 775-8839 or email slobreadbike@gmail.com for more info.

The Bread Bike concept is so simple, it's genius.

Mariah Grady, who loves to bake bread as much as San Luis Obisbans love to smell it along Higuera Street, revs up her apron around 4 a.m. to start baking. As soon as her gorgeous loaves and scones come out of the oven, Sam DeNicola, who loves his community, the environment, and riding his bicycle, loads up his bike trailer and rides from house to house delivering bread.

When I heard about Bread Bike, my heart was filled with romance. I mean bread coming to me on a bike? Well, I guess life ain't so bad!

In the time of coronavirus, this pure union of bread baking and doorstep delivery is something that makes the world a little happier. In fact, the co-owners say the bread is almost secondary to their mission to unite the community in good health and personal connection.

All are made with 100 percent organic flours and grains and fermented with a 12-year-old sourdough culture from Sonoma County, where DeNicola grew up and where Grady learned how to bake bread. The co-owning pair prefers working with regional growers and millers, choosing the highest quality, California-grown bread flour.

"To me it's so important to know where our food comes from, to know who is making our food and how the food is being made," DeNicola said. "As we grow, we actually gain the ability to support local growers and small growers."

He said the value of buying local comes through in both better flavor and in terms of keeping the planet healthy.

"Spending money on food is the easiest thing I do because I understand there's no one in the food world getting rich," he said. "Everyone is working extremely hard, but I think that understanding is really lacking in our culture. If something is cheap, there's a reason it's cheap."

When DeNicola delivers, he sometimes ends up clocking in some porch time. He doesn't mind. He admits he likes to talk, and he realized—especially at the beginning of the shutdowns—that people miss connecting with others.

He said there were times when a one-hour delivery run would take four, just because so many people needed to visit with a fellow human. The bread is bagged. He's wearing a mask. He sets the bread down on the doorstep and knocks. If he's in a rush, he flits off to his next delivery, but sometimes he keeps a distance and stays for a chat.

Seeing the people of SLO is his favorite part of the job.

"I feel safe. I hope other people feel safe. Especially in the very beginning [of COVID-19], it was just so awesome to see everyone. Everyone was just so grateful that I was there, and I could see how excited they were about that social interaction," DeNicola said.

DeNicola, 28, is a baker, biker, health food lover, and co-owner of Bread Bike. He said he's been "playing with dough" and making breads, pizzas, and pastas for the past eight years.

DeNicola has never tried Cocoa Puffs, and he wouldn't even want to. He was raised organic. His mother, a nutritionist and healing foods cookbook author, was one of his big inspirations in his passion for cooking. But he really wet his feet when going to UC Berkeley for his geophysics degree.

Which geophysics class teaches bread baking, you ask? Well, none.

It so happened that DeNicola was given the momentous task of feeding his housemates in a 50-person, coed, co-op house while going to UC Berkeley. There, as head cook and food buyer (with $100,000 yearly budget), he began making pizza and concocting kombucha. He tended to chickens and even, as a lifelong vegetarian, stepped out of his comfort zone and purchased cow shares from local ranchers.

Despite that accomplishment, he entered the rat race for a couple of years after college as a software engineer. His dream had always been to turn his baking into a way of sustaining himself, and he never stopped baking and cooking for all his friends.

Later on down the road, he was peddling loaves on a lawn at Cal Poly, and his bread business sparked by word of mouth. Soon, Cal Poly was adding his loaves to its CSA boxes and people were checking out the daily baked goods on Instagram.

Bread Bike began a year ago. The concept of building a mobile sliced-bread and pastry cafe powered by bikes evolved into its current state as a community supported bakery (CSB) and pop-up bread stand at places like Etto Pastificio in Paso Robles' Tin City or Lincoln Market & Deli in SLO. As of the end of August, Bread Bike had 168 CSB members!

DeNicola brought in Grady as a co-owner of the Bread Bike family in April. She grew up in SLO but was working at a bakery in Sonoma when her friend DeNicola "nagged" her to join forces and come back to SLO. She said with the whole coronavirus business, she gave in to his pleas. She needed a "reset." DeNicola and Grady are on the same baking rack with a shared goal to both feed and get to know as many people they can in the community. 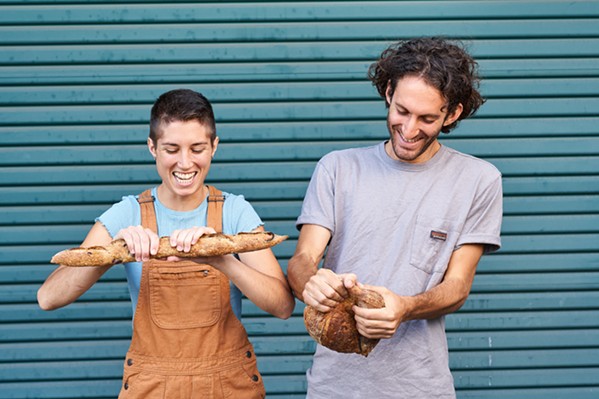 "At our core, we are both bakers and bikers," Grady said, though she added that they divvied up the responsibilities. At the moment, she spends most of her time baking, but they want her to get out on the bike more to meet the customers.

"The reality is Mariah loves bread and baking more than anyone that I've ever seen," DeNicola said as Grady giggled. "And it's kind of insane and ridiculous."

Apparently she never gets tired of her loaves and insists on tasting every batch every day. Every baguette batch must be tested and cherished. DeNicola said yes, he has a bread baking business and loves bread, but Grady takes it to a "whole other level."

Grady has been a lifetime lover of baking and eating baked goods. Some of her lucky neighbors were privileged to try her fresh baked lemon squares and homemade toaster pastries, as her contributions to the world seem to center on joy and delight. After graduating with a biology degree from Santa Clara University, she took her first baking position at Sally Loo's Wholesome Cafe in SLO. Grady has worked in other bakeries, but she'll tell you, she learned the majority of her skills baking bread in a wood-fired oven at Nightingale Breads in Sonoma.

Bread Bike rents a commercial kitchen space at Joliene Bakery in the Creamery. DeNicola said his customers are young and old, families and friends. The business is growing, and they are working on building bigger trailers to serve more community members by bike.

"There are reasons we ride bikes, the simplest being that we want to replace cars, ... but then there's also this beautiful reason, which has to do with our whole mission: To create community," DeNicola said. "And when you're on a bike, you're next to everyone, and people can talk to you and you can stop, and it just kind of slows it down a little bit to the pace where you can connect with people. ... I think that's what I found is the best part of Bread Bike." Δ

Flavor writer Beth Giuffre is baking and biking. Give her tips at bgiuffre@newtimesslo.com.