Break in the storm: Last weekend's rain stopped just in time for a Sunday getaway in Cayucos

Yes, my weekend plans were ruined by last week’s almighty storm. I bet yours were too!

My Plan A for Feb. 18 and 19 was a long-planned, two-day camping trip with my girlfriend for her birthday. But as the weekend forecast rolled in, those plans started to look very improbable. We had to scrap the trip—but the Get Out column must go on! I was grateful when Sunday, Feb. 19, brought a brief, peaceful break in the downpour so I could squeeze in a quick beach trip to Cayucos.

On the way, I had to first stop for lunch at Lolo’s Mexican Restaurant in Morro Bay. I was served by a super friendly lady who offered me tips on where I could find the best beach rocks (she even showed me one she recently picked up). I scarfed down a delicious cheese enchilada with beans and rice. The waitress was right: Taco Temple down the street is great for the organic health foodies; Lolo’s is great for fans of no-nonsense Mexican food. I love both.

Arriving in Cayucos, I was afraid the rain would start again before I even got out of the car. But it held off. I walked around by the Cayucos pier, seeing the kids play and the parents enjoy some dry beach time. A river split the beach and was flowing into the ocean—something I hadn’t seen before. It narrowed at one point just enough to be able to jump across it, which was fun.

The storms had drudged up so much ocean debris that someone or some people decided to push together the driftwood into a few giant piles, clearing much of the sand so it was safe to walk on. Thanks, community! 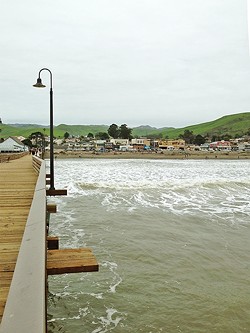 I decided to take a stroll down the actual pier, to the end, something I’ve never done. Fishermen cast their lines over the railing; tourists eagerly looked into the distance for a seal or dolphin; kids ran up and down the pier. I had my eyes glued on the half-dozen surfers enjoying the 4- to 5-foot waves just south of the pier. It was a cool experience to watch them from above, and yet be so close.

My very blissful zen state on the pier was interrupted by a few young men wanting to talk about the upcoming religious retreat at Camp Yaeger in Cambria. I politely accepted their flier, but had to draw a line when the leader started telling me a story about how they heard God speaking in tongues the night prior.

So I took off and walked back down the beach toward my car, checking out some rocks and the German Shepherds and Labrador retrievers running wild. Getting closer to my car, I had an unexpected reflection about the impending President’s Day. While some of us have qualms about our nation’s political environment and where we’re headed, in that moment on the beach I felt grateful for our coastline. Without a doubt, we have that to be proud of, especially here in San Luis Obispo. So, thank you to all the past presidents who helped preserve this exquisite coast and protect it as a place where surfers can surf, swimmers can swim, and fishermen can fish, mostly freely and safely. 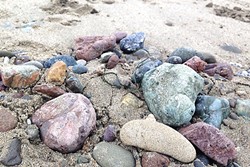 I started my drive back on Highway 1, and almost immediately loud raindrops started hammering down on the windshield. It was great to get out while I had the chance! 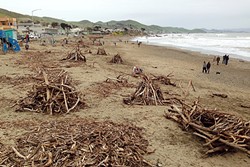