CJ Silas is legit. In 2004, when the sports broadcaster began work at a Los Angeles radio network, she was already a seasoned expert, with a degree in broadcast journalism and experience in sports radio and television all over the country, including gigs at ESPN and CBS Sportsline. And when she took the L.A. gig, she was the only woman in America with a nationally syndicated daily sports show—and she knew she’d worked hard to get there.

Silas was enthusiastic and educated about every professional sport. But she knew hard news as well: She’d spent eight months covering the OJ Simpson trial, a difficult topic for anyone, but especially for Silas, who believed a close friend of hers had been one of the victims. The morning of Sept. 11, 2001, she’d been on air, delivering the gruesome breaking news and, doing her best to put her own emotions aside, allowing callers to voice their shock and loss.

Silas had chosen a tough career, and she’d done it well. Taking her new job ought to have made her very happy indeed. But she already knew better than that. Her gender, you see, isn’t welcome in sports media. And if this job were anything like her previous jobs, the work she loved so much would soon become miserable. She writes of an industry where daily insults and sexual harassment from male co-workers, both on and off the air, make work a joyless and degrading experience. Her input at meetings would be either ignored or ridiculed. Sometimes meetings would be called without her knowledge.

If her new job were anything like those of the past, listeners would really take to her. She would probably be asked to make more public appearances than her co-host. She would receive more fan mail. The coaches and players she interviewed would be more receptive to her. They would open up like never before, and she would use the opportunity to ask them things sports reporters never asked—about their families, for example, or their little-known talents on the violin; any way to get past those canned, polished answers. She would make great radio, and in the public’s eyes, she would excel. At work, though, her self-esteem would be in shreds. She would be paid less than others. Her complaints of discrimination would go ignored. 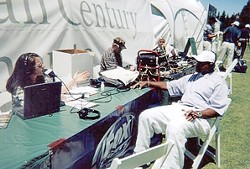 But Silas—who now lives in Pismo Beach—would forge on, developing the coping mechanism of documenting the events of her life in countless journals. These records became the book No Girls Allowed: The Jock and Jill Mentality of Sports Broadcasting, published this month through MaxQ Enterprises. The book provides a compelling, horrifying, angering look at gender discrimination in America’s sports media. There are many inspiring pinnacles to the trajectory, though these are hard won.

Hers is such an interesting, unbelievable story—and such an important topic—that I wish I could say it was well written. In reality, Silas often falls prey to the common traps of the amateur writer, and her prose, adapted as it was from journals, often reads in a clunky, dear-diary kind of way. Yes, the book is rich in captivating, moving content, a fact that is its ultimate salvation, and the reason I kept reading. But as Silas was beating yet another point to death, I admit I yearned for a bit of subtlety. (“Show, don’t tell!” I inwardly urged. And those caps! Caps are the shoulder pads of literature.)

There were little moments when she surprised me, as when describing her boss, on the phone, licking his finger and doing a half-assed job of rubbing away a coffee stain on his desk. That image—lazy, unselfconscious, foul—resonates somehow, and the reader intuits that whatever problem she’s come in to his office to discuss, it won’t get taken seriously.

Still, this book is not meant to be about the writing, and reading it is easier once one comes to terms with that. Silas’ prose, raw and conversational, has a certain unpretentious charm, like confiding in a close friend. One admires Silas for her bravery in entering a world where she’s had little experience. (And, just to even the score here: Would I, an arts writer, last a day in Silas’ profession? No. I would run home. Crying.)

Silas’ every moment of elation—a successful race, an interview with Barry Bonds that goes really well, for example—is one shared by the reader, as are her many painful encounters with professional heartbreak.

While a more mature writer could have produced a more aesthetically pleasing work, I have my doubts that many other human beings could have lived through what Silas did, maintaining her level of professionalism and humor through decades of misery, moving from city to city, and kicking ass all over again each time.

Arts Editor Anna Weltner is tougher than she lets on. Contact her at aweltner@newtimesslo.com.