Partying as an endurance sport? Why not?

Judging from their online videos, the group—first formed by Kyle Even, 29 (who has since left), and David Schmitt, 26—has two things on its mind: partying and hot club girls. They also sing anthems like “I.D.G.A.F.,” which stands for “I Don’t Give A Fuck” and makes me feel like the world’s oldest music journalist, which I am. Maybe. Who has the time to look this stuff up?

To their credit, they look like they’re having a helluva lot of fun. Formed in 2006, they first got noticed in 2008 with their album It’s Classy, Not Classic (created entirely in the computer program GarageBand), but they really broke out in 2011 with the aforementioned single “Blackout” from their third album Hell Is What You Make It. In between, they released Hello Fascination (2009; their first, true studio album with instruments), and, earlier this year, they released their fourth album, Savages, as a quarter with Schmitt (lead vocals, keys, synth, guitar, drums), Luis Bonet (DJ, keys, programming, bass), Tommy Cooperman (guitar, programming), and Eric Armenta (drums/percussion). The record debuted at No. 1 on Billboard’s Dance/Electronic Albums chart. It was during the recording process that Kyle Even left the band, purportedly because of his new responsibilities of fatherhood.

As a band that fully embraces technology, and typical of the crunkcore sound, there’s ample use of Auto-Tune and vocoders in their post-hardcore, electro pop tracks.

According to their press materials, “Savages sees the unit once again treading boldly into fresh territory, delving heavier into the electronic dance world while staying true to their rock roots, a combination that sounds equally at home in a club or lighting up packed fields at [the Vans] Warped Tour. Featuring guest vocals from pop artist Karmin and rock front men Danny Worsnop (Asking Alexandria) and Tyler Carter (Issues), Savages solidifies the band’s unique ability to straddle multiple musical styles and blend it into a sound all their own, a sound that is as infectious as it is euphoric—and about to become the soundtrack to your summer.”

Summer’s come and gone since Savages’ April release, but you can get your party on when Breathe Carolina plays SLO Brew this Friday, Nov. 28 (7 p.m.; all ages; $25 presale or $26 at the door), with Candyland and Dotcom opening a show they’re calling “The Friend Zone Tour.”

Candyland is Santa Barbara natives Ethan and Josie, who began producing their own original songs in April of 2012. “After becoming the first act to win back-to-back Beatport remix contests (for Skrillex’s ‘Make it Bun Dem’ and Bingo Players’ ‘Rattle’) and racking up over 1.3 million Soundcloud plays, they released their debut album Bring the Rain on Spinnin Records (Jan. 21, 2013), which charted to No. 3 on the Beatport,” according to their press materials. “Candyland continues to pave their own lane bridging the gap between trap, dubstep, and house music with every original/remix they release.”

Dotcom draws influences from Dillon Francis, Diplo, and Flosstradamus, and his music contains traces of dubstep, trap, and progressive house. His remix of Chief Keef’s “Hate Being Sober” received more than 800,000 plays in just one month!

Rave it up, kiddos!

The young producer Mimosa has been in increasingly high demand. He’s collaborated with the likes of Marines Parade Records’ PANTyRAiD and has been featured on Mary Anne Hobbs’ BBC radio show. He’s also shared the stage with the likes of Benga, Skream, Rusko, Datsik, Glitch Mob, Pretty Lights, Bassnectar, and Flying Lotus, playing shows across the U.S. and festivals like Coachella, Symbiosis Gathering, Burning Man, and Decibel Festival. 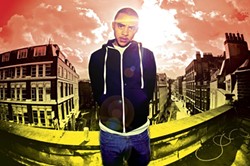 “Fans know Mimosa as someone who brings a good-time energy that is as fierce as it is friendly, taking them on journeys through urban chaos and ecstasy,” says his press materials.
His track “Lights In The Night,” composed with Sleepyhead (as “Sexytime”), was also featured on the Symbiosis Gathering’s 2009 compilation, and his past two releases, Flux For Life and Hostilis, “have shown an ability to move effortlessly between dubstep, glitch hop, and experimental hip hop.”
Likewise, Swindle is a multi-talented musician and producer. He hails from South London, learned to play piano at age 8, was recording his own music by 13, and turned to hip-hop in college, though he’s influenced by jazz, reggae and soul artists like Miles Davis, Bob Marley, and Stevie Wonder.
According to his press materials, “From 2007-2009, Swindle produced for the who’s who of the UK underground, names like Chipmunk, Professor Green, Asher D, Roll Deep, and Roses Gabor, while making steps to break out as a producer fronting his own music after long being in the shadow of the massive artists he was working with. Linking up with Elijah & Skilliam as they started the Butterz label proved to be the turning point in 2010, as they pushed him to finally make the leap into the limelight.”


The agony and the ecstasy

Artists need inspiration, and sometimes the best inspiration is the most difficult to live through, which was the case for singer-songwriter Thomas Gardner Jr. and the inspiration behind his new EP, 12:34.

What was next was trying to figure out where to take his music.

“No longer in a romantic or band commitment of any kind, Gardner felt lost yet inspired by the emotions and lyrics that would pour out when he picked up his guitar. A few months of seclusion, self-reflection, writing, and recording followed, and the result was his debut solo EP,” his bio reads.

“12:34 p.m. and a.m. were eerily a part of numerous big and small moments during this past year,” he said, “It felt appropriate to name my album after it. I’ve never been more proud of any music I’ve made. While the journey was difficult, I learned a lot about myself and I grew as an artist in the process. This is not just a new chapter for me; it’s a completely new book. I can’t wait to begin filling in the pages.”

His music is inspired by the ’60s and ’70s Laurel Canyon sound, which you can hear on “California Moon,” a song you can find online.

Some musicians are in it for the fame and fortune, while others just want to spread a little love. File Nick and Sonya Diane Jones in the latter category.

They’ll perform their “Have Yourself A Merry Little Christmas” tour on Monday, Dec. 1, at Morro Bay’s Bayside Care Center at 10 a.m., Morro Bay’s Case de Flores at 2 p.m., and SLO’s The Villages of Garden Creek at 6:30 p.m.

Nick is the Activity Director at Prestige Assisted Living in Visalia, and he and his wife Diane roll through our county periodically to bring their music to those in care facilities, which is pretty nice when you think about it.

Sonya is a big talent who probably would have had a big career, but instead she had four kids. She began singing in church at age 5 and has opened for the likes of Little Richard and Carlos Santana, and worked with producer Billy Moss (Chaka Khan, Aretha Franklin, Whitney Houston). You’ll be amazed by her talent.

Come on out, and meet some seniors in need of a little social time and listen to some great music from a wonderful couple! It’s the holiday season so spread some holiday cheer!

I checked out some videos online, and she’s got a lot of charm as an acoustic guitar-playing song stylist, but I was even more impressed that she’s a multi-instrumental woodwind player. One video showed her playing the baritone saxophone and improvising with a percussionist, which was very cool.

She’s recently performed with Union Station, Esperanza Spalding, Samantha Ronson, James Taylor, and other, and she’s currently on tour and recording up and down the West Coast.