Breathe in the fun

The Mid-State Fair delivers ... for a price

Sniiiiiiifffffff! Ya smell that? That’s the smell of country music, y’all. Yes, it does smell like manure with hints of sun-baked cotton candy, carnival ride-induced puke, and righteous indignation at having to pay eight bucks for a freakin’ beer, but that’s the price you pay to catch the sights, sounds, and—yes—smells of the Mid-State Fair.

belt buckles the size of serving platters, and angry bovines during the closing day of the fair this Sunday, Aug. 3, at 5 p.m., mosey on over to the Castaways Stage to get a taste of horse sweat and leather at 3 p.m. with Redeye Junction, a band that sounds like “a loose case of empties bouncing around in the rusted-out bed of a F150.” But I’m getting ahead of myself. There’s plenty more fair action before Sunday’s grand finale.

This Thursday, July 31, hotsy totsy Stacy Ferguson lights up the grandstand with her ferocious hotness. Like Madonna, Charo, and Liberace, Fergie only needs one name—she’s that big! Originally she was just a back-up singer for hip-hop act Black Eyed Peas, but her enormous hottitude couldn’t be contained. She first became an integral part of the group, then she busted out on her own as a solo artist. Actually, it’s not like she came out of nowhere. She was, after all, the voice of Sally and Lucy in some of the Peanuts cartoons. Check out Fergie at 7:30 p.m. She’s Fergalicious. Tickets cost $40, $46, and $56—available at the venue, online at either midstatefair.com or vallitix.com, or by phone at 238-3565 or 800-909-FAIR or 888-825-5484.

On Friday, Aug. 1, you can stick your pinkie in the air while sipping wine when Boz Scaggs plays during “An Evening of Music and Wine,” with opening act David Jacobs-Strain. Scaggs, of course, is the Grammy-winner who has brought you such hits as “Lido Shuffle,” “Look What You’ve Done To Me,” “Miss Sun,” “Jo Jo,” “Heart Of Mine,” “Lowdown,” “Harbor Lights,” “We’re All Alone,” and a whole lot more. The wine sipping and music begins at 7 p.m., and tickets cost $29 and $54. 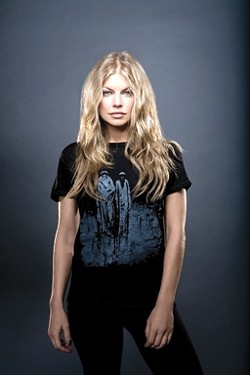 On Saturday, Aug. 2, you’ll get a twofer! Country band Sawyer Brown performs, and it’s also the Rodeo Finals. This here show is one for the regular folks, at least according to Mark Miller of Sawyer Brown: “I ain’t first class and I ain’t white trash—that’s who I am, and who our fans are. They’re somewhere in Middle America, the people who shop at Wal-Mart—and we’re proud that we are those people. I mean, I’m a father, a husband, an extremely hard worker, a true believer, and an eternal optimist! I believe in people, that we’re here to love each other and ourselves. We’re here to share everything: ourselves, talents, ideas, truths, knowledge, lives. That’s why our music connects. And it’s where the songs come from.” Tickets cost $17 and $20 for this 7 p.m. event.

And Sunday it’s bulls, beer, and ballsy country music by Redeye Junction. Then say goodbye to the fair for another year.

They don’t write ’em, they own ’em 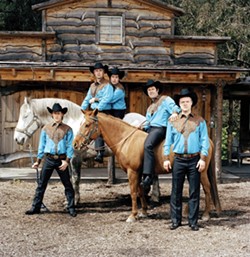 What do aging punk rockers who don’t have anything to prove anymore, guys who are bored of the same old same old, do to entertain themselves? They form Me First and the Gimme Gimmes, a band that offers awesome takes on classic pop songs from every era.

Think of this band as an all-star punk act, with members from NOFX, the Foo Fighters, Lag Wagon, and Rich Kids on L.S.D. They began in 1997, and released 7- inch singles before finally releasing a full length record, Have a Ball. Their newest and seventh full length is called Have Another Ball, released to commemorate the tenth anniversary of that legendary first recording.

Experience the thrills, chills, and spills of Me First and the Gimme Gimmes this Monday, Aug. 4, at 8 p.m. at Downtown Brew. This is a 16-and-older show, and presale tickets cost $16. 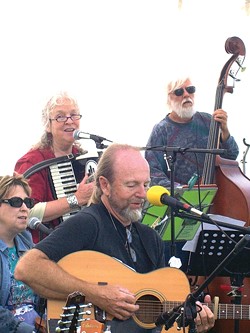 The next Brown Bag Concert (bring your lunch!) features Tumbleweed, a bluegrass trio that bills itself as suitable for “Weddin’s, Barnraisin’s, Hoe-Downs, and Hangin’s!” Check them on Friday, Aug. 1 at noon in the SLO First Presbyterian Church’s Wilson Hall, on the corner of Marsh and Morro, San Luis Obispo. For info, call the church office at 543-5451.

Local Scottish/Irish/Celtic act Hear the Darlings Roar will play the Avila Beach Farmers Market this Friday, Aug. 1 from 4 to 8 p.m. Buy some fresh fish and veggies, and do a jig.

SLO Mambo will get your booty shaking this Friday, Aug. 1, from 5:30 to 7:30 at the Paso Robles City Park Bandstand. Get ready for some sizzling hot salsa music.

Electric bassist and singer-songwriter Seth Horan will perform his original songs (think John Mayer and Ani DiFranco) at The Clubhouse this Friday, Aug. 1, 8:30 p.m. He whops on his bass, playing it like a dulcimer, a drum set, a harp, and a xylophone. The cover’s $10.

The Baywood Navy, for the fifth year in a row, presents “Boatzarts 2008” this Sunday, Aug. 3 beginning at noon. The event, coinciding with a whopping 4-foot-9-inch high tide, should offer plenty of clearance for those arriving by sea to this special concert featuring Ron Saul and the Howlie Playboys. Those traveling by land are encouraged to bring their own lawn chairs. 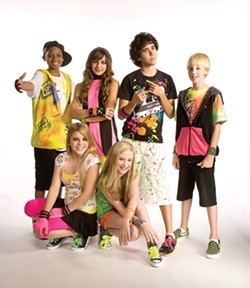 Pianist Tom Ranier plays the Famous Jazz Artist Series at the Hamlet in Cambria this Sunday, Aug. 3, with bassist Luther Hughes, drummer Bill Wysaske, and concert co-producers Charlie and Sandi Shoemake. Aside from his own work, Ranier is perhaps best known for his extensive work with legendary clarinet virtuoso Eddie Daniels. He’s also the musical director for the TV series Dancing with the Stars. He plays at 4 p.m. for $15, 7:15 p.m. for $12, or see both sets for $20. Call 927-0567 for reservations.

If you’ve got kids, you’ve got to take them to Kidz Bop Live, the live version of the popular youth CD, TV, and video series that’s making a stop at Madonna Inn Expo Center at 3 p.m. next Thursday, Aug. 7. Kidz Bop is like the children’s industrial complex! It’s taking over the world. Buy tickets at Vallitix locations or on line at kidzbop.com.

The Painted Sky Concert Series has Celtic act Molly’s Revenge playing next Thursday Aug. 7, at 8 p.m. Hear traditional music of Ireland, Scotland, and England, with occasional side trips to other parts of Europe, plus some of their own compositions played on an assortment of instruments, including guitar, mandolin, bouzouki, Scottish Highland bagpipes, small pipes, border pipes, uilleann pipes, whistles, fiddle, and bodhran. Award-winning vocalist and accordionist Moira Smiley will join the group for this special concert. Because Molly’s last Painted Sky concert sold out, you’ll want to get tickets ($18) early at Boo Boo Records, the Cambria Business Center, or by calling 927-8330.

New Mexico-based trio Round Mountain—featuring Char and Robby Rothschild—plays in Linnaea’s Caf» next Thursday, Aug. 7, at 8 p.m. for free. Playing everything from Balkan and West African styles, as well as traditional Appalachian music, classical, and funk, it’s pretty much impossible to pigeonhole them.

It happens every year: rumors that some Mid-State Fair show has sold out. This year it was Stone Temple Pilots … except it wasn’t. According to the fair’s marketing director, Tom Keffury, “I Just wanted to let you know that none of our concerts are sold out. The Main Grandstand Arena seats 14,605 for a typical concert and is very hard to fill up completely.”

If you think it’s too late to get tickets, it isn’t! And if you wished you’d seen Stone Temple Pilots, check out the next best thing: a slideshow of concert photos taken by Steve E. Miller on New Times’ Web site, www.newtimesslo.com. 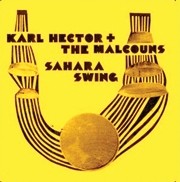 Record label Now-Again has emerged as a funk aficionado’s dream, time and time again. As a side label to the forward thinking hip-hop label Stones Throw, it’s been the outlet for the upper management’s collection of obscure funk 7-inches, preserving rare soul gems from the dustbin of obscurity. With such sophisticated and honed tastes, it’s no surprise that when they discover a new artist, it’s like entering a time machine. Karl Hector’s full length debut merges the backbeat and horn ensembles of the rawest funk, with the poly-rhythmic complexity and found sound of Pan-African ethnomusicology. If you remember Mulatu Astatke’s Ethiopian jazz featured prominently in Jim Jarmusch’s Broken Flowers, then consider this your new tonic. With contributions from Poets Of Rhythm’s Jay Whitefield and his European soul brethren, this instrumental jazz-funk owes as much to the progressive exploratory vision of Funkadelic and Sun Ra as it does to the pure smoking grooves of Africa’s most dynamite soul ensemble.

Merging the intense velocity of punk and thrash with the biting lyrical commentary of hip-hop, Rage Against The Machine erupted in the ‘90s with its fiery, passionate frontman Zach de la Rocha as its figurehead. When the band folded, the rest of the group recruited Soundgarden singer Chris Cornell and formed Audioslave; everyone else eagerly anticipated Zach’s next move, a wait that lasted nearly a decade. Well, the return is here, but now as a duet, and with an equally polemic moniker taken from George Rodriguez 1970s photo of a wall scrawled with this defiant message: “It’s better to live one day as a lion, than a thousand years as a lamb.” As politically instigating and musically volatile as his previous band, it’s an excellent, kinetically charged return, all stuffed into a five-track EP. Heavy on Rage-like riffs built from skronky explosions of Zach’s overly amplified keyboard and the sizzling, bombastic drumming of Jon Theodore (ex- Mars Volta), it’s as explosive as anything Rage put out yet doesn’t sound like a mediocre re-hashing. A welcome return to a political voice that been sorely missed.

Glen Starkey never goes to bed angry; he stays awake and plots his revenge. Get on his good side at gstarkey@newtimesslo.com.