Bred for California: Corberosa teams up with farmers to grow coffee trees in the shade of avocado orchards

Find Corberosa coffee at The Avocado Shack in Morro Bay and Cambria Pines Lodge in Cambria or visit corberosa.com to figure out how to order your own. Look for Cali Mokka coffee trees at Farm Supply Company in SLO, 224 Tank Farm Road. If you're a farmer interested in learning more about growing coffee, reach out to Trevor Freeman or Colin Princi at trevor@cacoffeeinitiative.com or colin@cacoffeeinitiative.com.

Coffee farmers don't necessarily drink coffee made from the beans they grow.

"You go out to the farm, and you pick your beans, and you suck on them. And they taste like honey," said Andrew Houghtaling, one of the brains behind Corberosa Premium Air-Roasted Coffee in San Luis Obispo. "Only one or two beans in the morning for us would give us energy all day long, which is really fun."

That was how he got his morning caffeine fix while nursing a coffee farm back to health on the slopes of the Haleakala volcano outside of Kula, Maui. The lighter the beans—as in the less roasted they are—the more caffeine they have, Houghtaling said. The third-generation avocado grower from San Diego started his coffee journey in 2015, after spending time volunteering at an apple farm near Avila Beach for about two summers with his then roommate, now business partner, Colin Princi. There, Houghtaling taught classes with a permaculturalist who had a coffee farm in Maui. Due to her health issues, she couldn't travel anymore, so she asked Houghtaling if he could go over there and help bring the farm back to its potential.

"I don't even think she got all the words out of her mouth, and I said, 'yes,'" he said. "I sold everything and moved over there with everything I could fit in a backpack, which was extremely liberating."

The farm grew about 10 boutique varietals, and Houghtaling was able to see all aspects of the coffee process, including seed propagation, growing, roasting, and brewing. While he was there, Princi visited to spend some time on the farm, and the idea of starting a coffee company grew from there.

Houghtaling brought some seed varietals back with him when he returned to the area, growing coffee trees in a Shell Beach house close to the ocean.

Princi said the whole deck of that house was a coffee farm. Trevor Freeman, who owns SLO Safe Ride and joined Corberosa as a partner in 2019, remembers that house. Freeman said they used to do weekly barbecues at the beach. 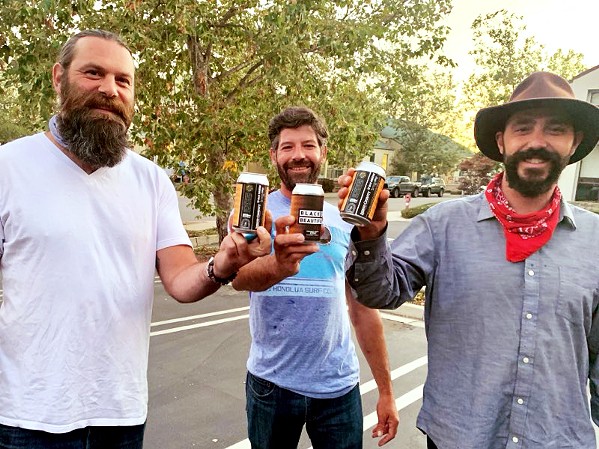 "One time we went up to the house, and it was like a tropical rainforest," he said. "They told me what they were working on, and I just thought it was so cool."

After each generation of tree matured, Houghtaling took the best of the best and repropagated the trees until he zeroed in on a variety that was adjusted to the area and climate of coastal California. They called it Cali Mokka.

"Kind of right then, a light went off for me," he said. "I had always seen family farms in Southern California closing because of the rising costs of production, the water costs, and stuff like that."

So why not give farmers a way to produce a secondary revenue stream? Princi, who recently took a trip to Ecuador to work with coffee farmers and look for new potential varieties that might do well in California, said that many of the high altitude grows in Central and South America are grown in the shade under a canopy. With Houghtaling's avocado connections, they pitched the Cali Mokka as a secondary crop to avocados, one that takes similar inputs and can grow in the shade of avocado trees.

Corberosa currently has a little more than 10,000 trees in the ground in California. Most are located in Escondido area avocado groves, but Houghtaling said they also have trees on farms in Cambria and Arroyo Grande and are working on putting a large farm in Nipomo. There are even 400 coffee trees in a "banana belt" area of Oregon.

Backyard growers itching to try their hand at growing coffee can now pick up Cali Mokka trees at Farm Supply Company in San Luis Obispo. Princi said you can plant them in your backyard if you live in SLO, Nipomo, Arroyo Grande, or along the North Coast. If you're further inland, like Atascadero or Paso Robles, he said they would make a great indoor houseplant.

"Anywhere you could grow a Hass avocado would be decent," Princi said.

Berries from the trees growing in California won't be ready for the roaster until 2022, but Princi said they decided to vertically integrate and started sourcing and roasting coffee in 2018. With coffee, he said, you can grow high-quality beans, but if those beans are roasted wrong, that quality doesn't show in the final product. Corberosa air roasts its coffee in Atascadero in 5-pound batches, which he said yields a smoother flavor and higher quality. About 90 percent or more of coffee is drum roasted, he said, with beans that spin around in 25-pound batches or more.

"Air roasting is all hot air. You don't have the beans making contact with a hard surface," Princi said. "It's a lot smoother. ... You're able to control it better." Pulling in coffees from small boutique farms in Latin America, Africa, and Indonesia, Corberosa focuses on establishing relationships with the farmers it sources coffee from, so they know how it's grown and where it comes from. The goal is to bring in more than the most common beans, varieties that stem from arabica and robusta. Princi said they offer single origin and blends with unique tasting notes and flavors.

It's all about balance, which is similar to the Hawaiian word "pono," commonly translated to "righteousness." But it's so much more complicated than that. It's about striking the right balance between people, places, and things.

"The appreciation of the land and just the connecting yourself to your farm and your land, and it's just a way of kind of living, and it was something that I was able to experience, and hopefully something that I will be able to share with people over here," Houghtaling said. Δ