What starts out looking like a horse becomes a bulgy-eyed, beaked, eight-legged beast as you flip through the opening panels of Bun. Its body is segmented like a great arthropod, a mix between praying mantis and spider. And it’s only just large enough for a mysterious bearded man to ride upon. 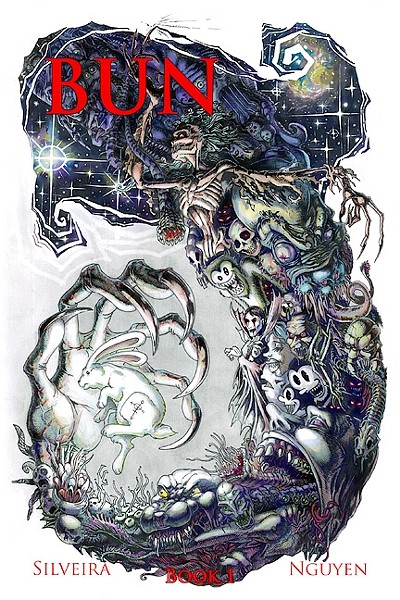 The reveal is jarring, and it’s supposed to be, explained Brian Silveira, a Santa Maria-based artist and real estate/ property manager who produced the recently released comic book with his wife, Lisa Nguyen. Silveira wants the reader to feel the same jolt that his main character, Milo, feels as he’s transported from his familiar—and somewhat mundane—home in Los Angeles to an unknown land. The hairy stranger rescues Milo in that opening scene, after the kid is almost devoured by razor-toothed creatures coming out of the ground. It only gets weirder after that.

“I really want you to feel like you’re that poor kid, who doesn’t know what the hell is going on,” Silveira said. “The first few pages, there’s shark slugs, spider camels, salt flies, and weird things like that.”

The bearded man is aided by a young woman, who we later learn is his daughter, and she immediately interrogates Milo—except she’s speaking an alien language made up of unintelligible symbols.

The only reply Milo offers is to pull something out of his sweater’s large pocket: a big, white rabbit. This is Bun. That character, Silveira said, was the original inspiration for the comic.

“I don’t know why, but I just started drawing this goofy, cartoony looking rabbit, and all kinds of crazy stuff just recoiling in horror from it,” he said. “It was always a rabbit with monsters, vampires, and demons, everything just scared of the rabbit. I always thought that was just funny.”

The idea of the rabbit being “garlic to a vampire” intrigued Silveira, and he began creating a story.

Influenced by generations of fantasy, science fiction, horror artists, comic books, films, and writers, Silveira wanted to create his own “other world” with its unique people, languages, and cultures. There’s even a religion in this mysterious other world, which actually plays a central role in understanding the cryptic history of the place in which Milo finds himself.

Though the influence of artists like H.P. Lovecraft and Ralph Bakshi play heavily, Silveira really tried to create something all his own. From the mysterious goddess religion that the inhabitants of this other world worship, to the race of creatures at war with those people and the coded languages he invented, there are many layers woven into the fabric of Silveira’s story.

He wasn’t alone in fleshing out his imagined world, Silveira explained. Nguyen did the lettering for the story, as well as the editing work, but she also helped him fine-tune the plot.

“She’s a big reason why it is as cohesive as it is,” he said. “If it was just me, I don’t think it would be as well presented.”

Right now, Bun is a passion project of Silveira’s, and copies are only available by donation. All the donations will go toward publishing the first book of Bun. He’s already drawing the second book.

Silveira envisions that the Bun story will take six books to tell, but he’s not sure how it will get done. He may self-publish, go through an indie comic book publisher, or put the entire thing up for free on the internet once he has the funds to do so.

Mostly, Silveira explained, he just wants people to read and see his art, and spark a dialogue. The last page of Bun welcomes comments, fan art, and questions.

“I’ve always been very collaborative, that’s how you do something, and I’m open to collaboration with Bun,” he said. “It’s a little tricky, but I want people to collaborate on the concept without revealing too much of where I’m going with it. I think I can do it.”

Arts Editor Joe Payne from New Times’ sister paper is trying to decipher the secret language in Bun. Contact him at jpayne@santamariasun.com.