As adults, we tend to look down our noses and tut-tut when we see teenagers glued to their phones and tablets, but one local high school student is looking to harness the power of tech savvy teens to help local seniors. 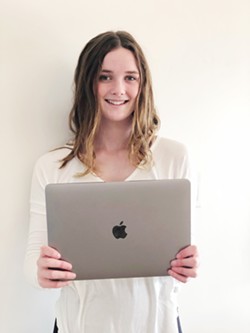 "Sometimes [the seniors] just want to know how to set them up," Barneich, 16, said. "But many times, it's small things like how to send photos, how load an app to their phone, or how to use social media."

She said the idea to create the clinics came from her own experience helping her grandparents learn how to use newer technology.

"They were always asking me to help them," she said.

Barneich said the clinics focus on explaining how to use the technology in easy-to-understand terms, and not only showing the participants how to use it, but making sure they are able to do it on their own before leaving the clinic.

"We tell everyone to be patient," she said. "We want [the seniors] to be able to go home and do it themselves."

As a tech-savvy teenager, Barneich said she began to see how modern technology was creating a barrier between the age groups, one that only seemed to grow wider as the pace of advances in computers, cellphones, and other tech sped up.

"I saw that technology created a disconnect between the older generation and my generation," she said. "I wanted to bridge that gap."

If the initial clinics are any indication, Barneich may be onto something.

"It's actually really cool to see ... [the seniors] are interested in becoming more advanced with the technology," she said. "They are really appreciative of our help."

It isn't just the seniors who are getting something out of attending the clinic. Bridging the generation gap is a two-way street, giving the participating teens the chance to get to know the older members of their community.

Barneich said she'd organized two clinics since December, with about 20 to 25 seniors participating thus far. The next clinic is scheduled to take place March 17 from 10 a.m. to noon in Arroyo Grande. Barneich has high hopes that the clinics may one day spread to other areas in SLO County.

"I really want to expand this into the community," she said.

• Registerednursing.org ranked Cuesta College's RN Program No. 1 in California. The organization ranked the top 50 nursing schools in the state using the percentage of graduates who pass the nursing exam. For more information, visit registerednursing.org.

• On Feb. 7, Page Roofing was slated to install a new roof on Atascadero resident Pamela Hughes' home as part of the local company's No Roof Left Behind initiative. Hughes' roof caved in last spring due to heavy rains and she hasn't been able to live in the house since. Insurance will pay to clean up the black mold inside the house but won't fund a new roof. No Roof Left Behind is a nationwide program that gives the community a way to help their good neighbors that have fallen on hard times. The program provides a local contractor the framework to provide a new roof at no cost to a deserving homeowner in need. To learn more about Page Roofing, visit pageroofing.com. Δ