Bring along your GPS

The Compact Gallery revives, and relocates 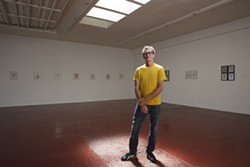 There’s a new gallery in San Luis Obispo. The challenge is finding it. Moving up Higuera Street—in the wrong direction, if you happen to be operating a vehicle—beyond downtown, past Santa Rosa St., past Bank of America on the right, and the gas station on the left, and only slightly past the Porsche dealership, you’ll find a small art space on the left. You might even call it compact. If you reach the city’s two Mediterranean restaurants, Petra and Jaffa, inexplicably located next to each other at the further end of Higuera St., you’ve gone too far.

Gallery owner Jeff Jamieson, an artist and furniture maker, discovered the space during a bicycle ride. He’d been looking for a space to revive the Compact Gallery for the past year, and appreciated the building’s tucked-away quality. In fact, the addition of an obscure sign on a door or window, was undertaken only with the utmost reluctance on Jamieson’s part.

“I love this location,” said Jamieson. “We are downtown, but hidden away. Half the people at the opening were going ‘we got so lost.’”

Jamieson signed the lease at the beginning of June, and the gallery opened to the public with a July 2 Art After Dark opening reception for Mary Renzi-Cowitz. The gallery will follow the standard format of month-long exhibitions with artist receptions on the first Friday of each month. In keeping with the communal operation of the first Compact Gallery—located in the Creamery for two years during the mid-2000s—a team of eight volunteers each works a weekly three-hour shift at the gallery. The original space was a proper collective, whereas Jamieson has final say in all decisions relating to the new gallery.

“A group of people—artists, teachers—got together just to see more art. In person,” Jamieson explained the history of the last gallery. “There’s a big difference between clicking through on the web and actually seeing stuff.”

Cleaning the gallery in the month leading up to the opening was a group effort, mostly occurring on spare nights. There’s more that Jamieson would like to accomplish—more permanent alterations—but the lease isn’t sufficiently long-term to justify sinking larger quantities of cash into a renovation project.

Throughout the month of July, Renzi-Cowitz’s Superman paintings and collage dominate the gallery’s otherwise spare walls. The lone figure pulls apart his jacket to reveal the iconic S on his chest, or charges confidently towards the viewer with his arm outstretched. Jamieson commended the artist’s “concentrated vision.” The two met while teaching at Cuesta College; Renzi-Cowitz is a Drawing and 2D Design instructor. Though Jamieson elected not to clutter the spare walls with price tags and titles, each of Renzi-Cowitz’s spandex-clad figures sells for $400.

But local artists won’t be the norm at the Compact Gallery. Jamieson hopes to play host to artists from around the world, and jokes that he’s in need of people’s frequent flier miles. In August, the featured artist is a Bay Area photographer, and Jamieson’s interested in using the space for installations and other shows that challenge the local norm.

“I used to live in New York City, so I used to see shows every day,” explained Jamieson, who relocated to San Luis Obispo because he thought it would be a better environment for his children. “I miss that.”

Rather than pine for New York, Jamieson’s importing his own slice of it, where there’s always something different to see, tinged with the slightest hint of alternative attitude. You’ve just got to find it.