Bringing down the house? 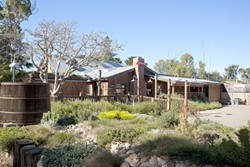 Andrew Adams sits back in his chair on the wood front porch of his popular restaurant, wrings his freckled hands, and shakes his head in disbelief as he recounts his prolonged struggle with the business’ surrounding neighbors.

“These people have tried for years to harm me, and I’m tired of it,” Adams said, raising his voice over a truck rumbling down Foothill Boulevard in rural San Luis Obispo. “Enough is enough.”

As is often the case when an outside observer attempts to unravel an ongoing neighborly dispute, the facts in Adams’s plight are opaque, filled with the standard he-said she-said rhetoric, and punctuated with conflicting evidence.

What is certain is that the historic Clubhouse at This Old House restaurant sits in a residential zone—its closest neighbor is approximately 70 feet away—grandfathered in to operate under certain restrictions. Adams told New Times he bought the property on a promise that grandfathering would allow for entertainment, and said he’s now being forced to comply with a use permit he was never told existed.

Since the business took over the property in 2007, it’s been frequented by sheriff’s deputies responding to complaints of loud music, late operation, and claims that Adams is operating an after-hours nightclub rather than the permitted restaurant.

The Clubhouse’s neighbors, on the other hand, contend they’ve been pushed to call law enforcement and even to take their issue before the county because of what they see as a lack of cooperation by Adams and his staff.

Now Adams is scheduled on Nov. 19 to make an appearance before the Planning Commission to determine whether he’s violating the conditions of his development plan. At stake: the possible revocation of his operating license.

It’s not the first time he’s been up against such challenges. Adams was hauled before the Planning Commission for a revocation hearing on May 14, 2009, when commissioners, based on evidence provided by neighbors, found that Adams was indeed violating the land-use ordinance, which prohibited entertainment such as live music and mandated that restaurants operating in residential zones must close by 9 p.m.

But instead of putting him out of business, commissioners modified Adams’ conditions, allowing him to stay open until 10 p.m. on weekdays and 11 p.m. on weekends. They allowed live music, but only if it’s amplified “no greater than that required to be heard by patrons inside the building.”

“They gave him a lot of flexibility and warned him they didn’t want to see him again,” said Art Trinidade, the county’s chief code enforcer. “Even if he didn’t understand [his restrictions] when he bought the property, in May 2009 the commission made it abundantly clear.”

Since then, neighbors allege, problems remain. Martin and Christine LaBuda, who live closest to the building, told New Times that not only does the music remain a problem, but that communication with the management has completely soured.

“The noise is horrible. I’m almost deaf, and at times it wakes me up at night. The drums jar me out of bed,” Martin said. “[Adams] seems to think he needs loud music and people screaming to make it profitable.”

“We are not in the position where we would want to hurt someone’s business, but we would like to be treated with respect,” Christine added.

She said her calls to the restaurant to complain are met with “disrespectful remarks.”

“They absolutely will not stop until they have put me out of business,” Adams said. “And they will say that is not their intention, but as long as there is any ambiguity as to what my rights are, they will be nitpicking me forever.”

According to Planning Commissioner Anne Wyatt, the commission will likely seek to reinstate the original land-use ordinance restrictions for restaurants in residential zones—i.e. no more music.

According to Adams, the building, originally built in 1917, has been home to a number of businesses, including a WWII-era brothel, a cowboy bar and, briefly, an A.J. Spurs. Adams said his vision for the property when he bought it was to bring it back to its “roadhouse” roots.

“It was obvious from the history the place has always been very lively,” Adams said. “They had music and dancing going way back to the ’40s.”

In regard to complaints of loud music, Adams said he’s worked tirelessly to mitigate some of those problems, including changing the types of music played, as well as pouring thousands of dollars into sound insulation.

“I’ve easily put in $20,000. Very easily. And yet they’re trying to characterize me as cavalier and doing nothing,” Adams said. “And they still have never been able to show that we’re violating any sound ordinances, though they’ve attempted to.”

Trinidade confirmed he had attempted to test the decibel level at the property but that the tests were not designed to “catch” people violating noise ordinances, but instead to reach an average reading, over a period of an hour or two, for constant sound generators such as factories or freeways—not an inconsistent live music venue.

As for the allegations of closing late, Adams argued that his staff stops serving on time, but that you can’t “rush people out the door,” adding that musicians often need time to break down their equipment.

“If we can find that he’s got a point with some of those issues, then that would add some sympathy to his cause,” Wyatt said.

While the battle over the Clubhouse isn’t a first, having such a business brought before the commission for possible revocation is “an interesting rarity,” Wyatt said—but it’s not unheard of. As is standard in cases involving warring neighbors, she said, facts are rarely set in stone.

“Welcome to our lives,” Wyatt lamented. “No, it’s really horrible, the anger and animosity between neighbors sometimes. What makes it harder is that the facts are not so clear.”

Case in point: Neighbors say they’ve logged upward of 40 calls to the Sheriff’s Department for noise complaints. In a number of incident reports, deputies—who are required to respond—noted that noise levels at the neighboring properties were “very faint” or “at a reasonable volume.” Some of the 18 Johe Lane and Guerra Drive residents who signed a letter to the Planning Commission told New Times they couldn’t even hear any music from the establishment, but signed in support of others who could.

According to neighbor Tom Meinhold, the neighborhood is more concerned with setting a precedent on conditions of use for the potential next owner of the property.

Adams said he’s looking for an interested party to partner with, but the current situation is effectively keeping investors away. Still, he said, the restaurant is just beginning to take off, and to close him down now would more than devastate him, as well as his 20 employees, the seven bands that play there regularly, and the loyal regulars who frequent the Clubhouse.

“Music is a key element of my business. Without it, I’m done,” Adams said. “And is it in the best interests of this community for this historic property to die?”