'Broke as the Ten Commandments and sometimes harder to follow' 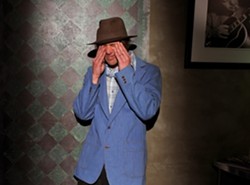 Second verse, different from the first: “They found a store with a sign that said/ their beer was coldest./ So they sent in Brad ’cause he looked the oldest./ He got a case of beer and a candy bar, walked over to where all the registers are/ laid his fake I.D. on the counter top./ The clerk looked, and turned to look back up and stopped./ He said ‘Son, I ain’t gonna call the cops, but I’m gonna have to keep this card’/ the guys both took it pretty hard.”

Third verse, also different from the first: “They met another old hippie named/ Sleepy John, claimed to be the one from the Robert Earl song./ So they gave him all their cash—he bought ’em some brews./ Was a beautiful day out in Santa Cruz/ They were feelin’ so good it shoulda been a crime./ The crowd was cool, and the band was prime./ They made it back up front to their seats just in time so they could sing with all their friends ‘the road goes on forever/ and the party never ends.’”

Not only is Todd Snider hilarious, whip smart, and endlessly entertaining, his music is also really infectious—the sort of songs you hear once and never get out of your head again. No wonder Rolling Stone magazine calls him “America’s sharpest musical storyteller.”

Snider’s newest offering is Agnostic Hymns & Stoner Fables, a collection of songs about “losers in the midst of losing.” He notes in the album’s sardonic opener, “In the Beginning,” that “We still need religion to keep the poor from killing the rich.” Look out, one-percenters! Doom and gloom never sounded so hilarious. Of course, there are also some upbeat tracks, such as “Brenda,” about Snider’s favorite couple … Keith Richards and Mick Jagger!

“I admire that relationship a lot,” Snider said in press materials. “What Mick and Keith have is real, and it can’t be touched and it can’t be beat. I’ve never met them, but I believe in the Rolling Stones. That’s who I think about at Christmas, anymore. They opened their hearts and gave us so much. And they tried to be true to each other.”

Snider plays SLO Brew on Tuesday, March 27. So buy some tickets, come to the show, and let’s give Todd an Art Bash! welcome!

“Wish I could show you how you hurt me in a way that wouldn’t hurt you, too,” he sings.

Oh, we’ll see about that!