Brunchables: The secret life of brunch

Brunch, like twilight, is a sacred  time of day. If you move too fast, you could miss it.

Brunch isn’t experienced by the go-getters or the healthy juicers. It is reserved for those who wish to sleep in and/or laze about until at least 11 a.m. Brunch is not a meal; it’s a lifestyle. 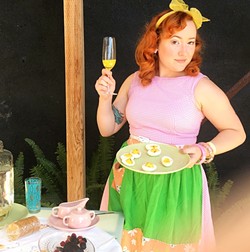 As I edge farther and farther toward my 30s, I experience less and less brunch. What was once a weekly Sunday tradition of post-bar mimosas, massive omelets, and hilarious stories about the night before has shriveled into a once-every-six-months event, if that.

The reasons are many: hangovers are a real thing now. Also, I’m more likely to down a pitcher of kale, chia, and frozen raspberries than a plate of ketchup-splattered hash browns or a monster Bloody Mary. There’s also the whole “spending Sunday mornings at Home Depot with my husband” thing. I get giddy over new flooring.

I know, I’ve become “one of the normies.”

Still, every blue moon, I feel a hangry brunch coming on. It’s a fiery, itchy feeling down in my gut—the same feeling that tells me to dance at weddings. It calls for crispy bacon covered in syrup, diner coffee with loads of cream, and bottomless mimosas, one after the other. When the feeling hits, I know I need to make my way south, where my brunch career officially began.

Let me take you there. 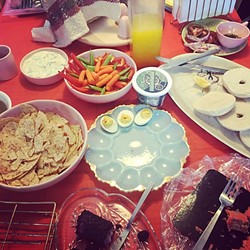 It all started at the 24 Hour Shower Truck Stop Cafe in West Long Beach, a place where a truck driving man can get a real shower, a hot meal, and probably some sort of upper before getting back on the road (we searched, but no lot lizards were ever found).

This was one of our favorite brunch joints, not far from a house I rented with rowdy friends. We were in our late teens/early 20s, and the idea of an entire ham steak with a side of runny eggs sounded massively appealing, especially to me. I was eating Cheerios for dinner most nights of the week.

I may not miss the food, but I truly miss the massive statue that can only be described as a knock-off of Bob’s Big Boy: a cowboy waving “howdy!” as our gaggle shuffled in, bleary-eyed and crusty. Thanks to him, we always left lubed up with grease and stuffed full of cheap, fluffy pancakes. Of course, there were other places: an Irish pub that over-poured the champagne; a Mexican brunch buffet where you could stock up on huevos rancheros and flan. A bar down the street where you could nurse a single PBR for hours while devouring a delicious “community potluck.”

Although I think fondly of those first truck-stop meals and the subsequent greasy spoons that followed, I wouldn’t go back if you paid me. Not only does the idea of “wieners with two eggs, potatoes, and toast” for $3.99 inspire skepticism, I crave a more “adult” brunch. I’m not snobby; I just need something harder. The kind of experience that can carry me through for months (and won’t send me running to the bathroom doubled over). 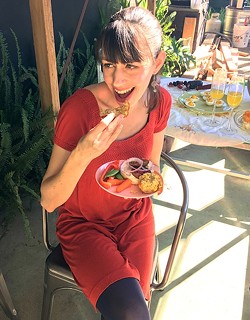 My latest Long Beach brunch—far, far overdue—soothed my ache for excess butter, exuberant friends, and pure laziness (when was the last time you did absolutely nothing on a Sunday?). We piled into The Federal Bar in downtown, ready to relive the glory of brunches past. Of course, half of our group was late, meaning mimosas happened before food. And so, my pal Lindsay and I began our strange tradition of posting “mimosa videos” on the Internet. One step forward, one step back, eh?

Lack of “adulting” aside, it was a fabulous setting for a brunch reunion with longtime friends. Built in the 1920s, the building shines with refurbished wood, impossibly ornate ceilings, and glittering chandeliers. Old books and globes peek out from well-oiled bookshelves, giving the whole place the vibe of a midcentury study. Vast, black leather booths beckon, as if to say, “Eat up. Your dirty brunch secret is safe with me. Why not follow that with a smoke?” Portions of Mad Men were filmed here, people. Need I say more about my attraction?

Of course, I ordered the salmon Benedict with perfectly poached egg, rich chipotle hollandaise sauce, wilted spinach, and creamy polenta. Oh, and a side of fries. Lindsay ordered the Bloody Mary burger topped with bacon and fried egg. Naturally, we spent the rest of the afternoon craft beer tasting.

Before you start typing up a long hate email accusing me for being sort of an entitled drunk (feel free to cc all New Times staffers), remember this: Brunchable days like this are few and far between. And that’s OK! It took me almost a decade to realize that a real brunch is a lot like St. Patrick’s Day. If you do it right, you only need one a year. 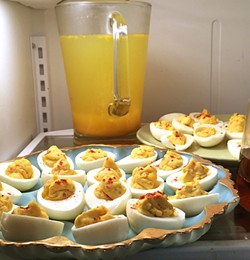 These days, I am far more likely to brunch it up at my own house, normie that I am. On Superbowl Sunday my husband and the rest of the sports set watched football while myself and the sports-free sat outside in the sun drinking mimosas and consuming bagels and lox. You might have called it a “Super Bowl party.” I call it “Broncos and Brunch II.”

Prepping for my home-style brunch always starts the same. I walk through the kitchen door out to our side yard, populated by skittish chickens. I usually yell, “Hello chick-ee-dees!” which doesn’t help our strained relationship.

After collecting any eggs, I grab the 12-foot-long picker (a stick with a claw-like basket attached) and get to the long task of harvesting oranges from our overflowing tree. I fill up as many bags as I can with the sweet, tangy fruit. Some are so ripe that they fall onto the ground without much prodding. Others won’t come down regardless of how hard I tug (and yell, much to the annoyance of the poor hens).

Soon, the orbs are bobbing in the sink with a little soap to coax off the dirt. Next comes the manual juicing with an ancient chrome-plated juicer. It takes hours. What fun!

Yes, this is far, far different from the fast-and-loose brunches of my past, but it still gives me an unexplainable joy. Mostly, I have time to think. I’d like to say I think about something important, like whether or not Hilary Clinton ever affords herself a bubble bath now and then. The truth is more embarrassing. I’m usually thinking about bacon. How I’ll cook it; who I’ll eat it with; and how many bottles of bubbly my friends are bringing over.

Hayley Thomas is frying bacon and eggs at hthomas@newtimesslo.com.