Bruno's Greenhouse is a destination in Nipomo

A  customer utters the words “gorgeous,” “majestic,” and “beautiful” as she browses through the foliage along a meandering path at Bruno’s Greenhouse, an indoor/outdoor plant nursery in Nipomo.

It’s the type of reaction that owner Christine Bruno intends when customers come to her greenhouse, or nursery. It’s actually both, but it’s mainly a nursery, since most of the plants sit outside. There’s a greenhouse off to the left, just past the gift shop. Statues of Buddha and the Virgin Mary randomly adorn portions of the lot. 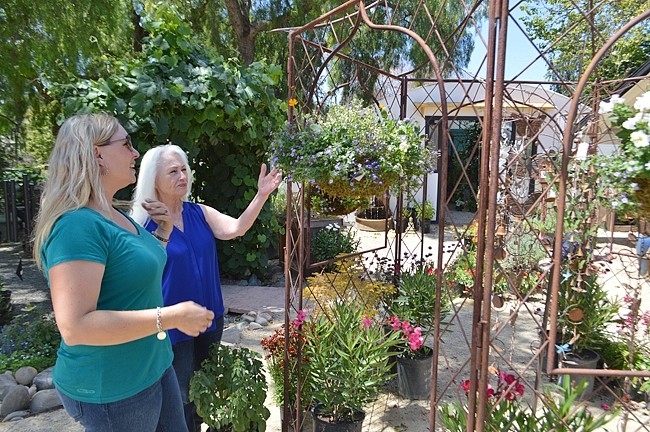 It’s not the typical nursery and a far cry from what one would see at a department store greenhouse, like in Home Depot or Walmart, for example. Although it’s dry for the moment, an artificial riverbed cuts through the nursery and under a small footbridge.

The low-hanging branches of a pepper tree provide shade for this part of the nursery. The sound of flowing water can be heard coming from several active water fountains. A slow breeze gently pushes the rods of a wind chime against each other, creating a mesmerizing sound. It looks and sounds like a fairy tale.

At the checkout register, there is a terrarium with two chameleons (a male and a female) that blend in and hide among the vegetation.

“This is not your standard parking lot nursery,” Bruno said. “It’s a lifestyle and garden shop, because it’s an experience when you come here.”

There are succulents, flowers, palm trees, and some plants that bear fruit—like pineapples. Bruno tries to feature  things that can’t be found in other Central Coast nurseries/greenhouses.

“One thing we want to do is bring in unusual plants you don’t see elsewhere,” Bruno said.

The nursery isn’t just into trees and plants. Bruno’s sells miniature fairy figurines and accessories that can be constructed into tiny “fairy gardens” that look something like a village that some people place under their Christmas trees, but much smaller.

The gardens are constructed inside a wooden boxes, some a little more than 2 square feet. There’s a teeny house, a shed, some fairies, and a bunch of miniature trees in one of Bruno’s fairy gardens. Moss is used to replicate grass.

Bruno also knows that the drought’s causing some people to rethink how they present their lawns. People are bombarded with information about how to save water, including restructuring their grassy areas to have more drought-tolerant plants that use less water. But Bruno said it doesn’t necessarily have to be this way.

There are “literally a ton” of options other than succulents, according to Bruno, like planting phormium, kangaroo paws, lantanas, or cordyline.

Recently, she started hosting classes taught by a retired horticulturalist at her shop on Saturday afternoons. They’ll cover several topics, including water management and drought-tolerant planting. She wants to host birthday parties there, too.

She also hints at the possibility of opening a café in the future, but it’s only a thought for now.

Although the nursery’s been in existence for more than 25 years, according to Bruno, she purchased the business back in March.

The nursery isn’t hard to find. Heading south on Highway 101, take the Tefft Street exit and turn left. Go down a couple of blocks, and it’s on the right-hand side of the road on the corner of Tefft and Carillo streets.

Bruno’s Greenhouse is located at 323 W. Tefft St. in Nipomo. For more information, call the greenhouse at 929-1084 or email chris@brunosgreenhouse.com.