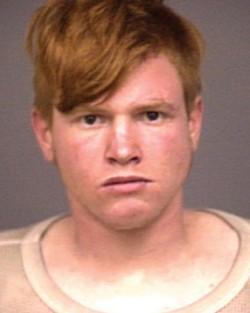 #
Â Â Â Â Thereâ€™s no explanation. David Siebert was walking down Higuera Street at 1:30 p.m. when two men brutally assaulted him, one brandishing a skateboard, the other a two-foot chain with large blunt piece of metal attached to it. â€œThis wasnâ€™t just some gag,â€? says Seibert, who suffered multiple injuries during the attack. â€œThese guys, after the first couple of blows, were yelling â€˜beat his assâ€™ and â€˜gang bangâ€™. They were having fun, they were yelling. It was like a rodeo.â€?
Â On January 26, Siebert, a county employee, was walking on the 500 Block of Higuera, not far from the New Times building. He watched as Andrew Mitchell, 19, skateboarded directly into him, then picked up his board and inexplicably swung at Siebertâ€™s right side. In pain, Siebert looked into Mitchellâ€™s eyes, which apparently were focused on an accomplice over Siebertâ€™s shoulder. The victim instinctively turned around with his forearms blocking his face as Charles Clark, 26, approached from behind and swung at Siebertâ€™s head with a two-foot hitching chain with a nine-inch square piece of metal attached to one end. Siebertâ€™s defensive action, which he credits to weaponless defense training he received while working as a park ranger, may have saved his life. â€œWithout my training, I would have had my head smashed into the sidewalk,â€? he says.Â

Â Â Â  Thereâ€™s no explanation why Siebert was the victim of such random violence. The two attackers didnâ€™t ask for money. They didnâ€™t even say anything to him. â€œIâ€™ve never seen these guys in my life,â€? Siebert distraughtly explains. â€œI never even had a chance to speak one word.â€?
Â During the assault, an unknown citizen called the police, then ran across Higuera Street to the fracas. Clark and Mitchell apparently got scared and fled the scene, but didnâ€™t make it far before police caught them. Both were charged with assault with a deadly weapon, a felony, and remain in custody as of press time. Lt. Chris Staley of the San Luis Obispo Police Department explained that any object, including a skateboard, that has the potential to cause great bodily injury onto a person can be a â€œdeadlyâ€? weapon.

Â
Â Â  Siebertâ€™s lower back is covered in black-and-blue bruises, the result of a direct blow from the hitching chain. Doctors tested Siebertâ€™s kidneys for internal damage, and heâ€™s agreed to undergo counseling as a result of the incident, he says.

Â Â  Â The seemingly random act of violence appears to resemble the unsolved June murder of Sharon Ostman. â€œAny time you have crimes of violence occurring in the same area, then theyâ€™re going to be looked at (as suspects),â€? says Lt. Staley, but Mitchell and Clark have not been named as suspects in the Ostman murder.Â Â
Â