SLO County’s Chief Administrative Officer (CAO) Dan Buckshi often plays the role of peacemaker and mediator in Board of Supervisors disputes. When board members refuse to compromise, which is often, Buckshi will make the effort to find a reasonable path forward.

“I try to help them along,” a weary Buckshi told New Times back in February.

The Board of Supervisors will have to find a new peacemaker—and someone to balance their half-billion-dollar budget—because on May 12, Buckshi announced his resignation as the county’s top employee. 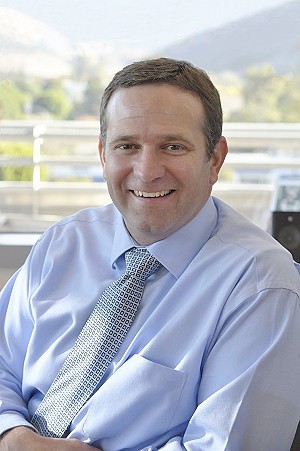 Buckshi will become the city manager of Walnut Creek, a city in California’s East Bay Area near San Francisco. The Walnut Creek City Council approved Buckshi’s appointment on May 16, and he’ll begin work there Aug. 7. Buckshi will make a $254,000 salary and be eligible for a $300,000 home loan. He currently makes $239,000 per year as SLO County’s CAO.

“It is time for a change,” Buckshi said in a press release May 12. “I am proud of all we have accomplished during my tenure, and I am thankful for the many opportunities the county has afforded me over the years. However, the current Board of Supervisors is very different than the board that promoted me to the CAO position five years ago.”

John Peschong, 1st District supervisor and chairman of the board, said Buckshi may stay on with the county through June’s 2017-18 budget hearings, after which the board will name an interim CAO and open a formal search for his replacement.

“I wish Dan the best,” Peschong said. “He’s shown me tremendous professionalism and has been an asset to the community.”

Buckshi’s reference to a “very different Board of Supervisors” drew heated, emotional commentaries from 2nd and 3rd District supervisors Bruce Gibson and Adam Hill, who blamed 4th and 5th District supervisors Lynn Compton and Debbie Arnold for fostering a “hostile” environment that precipitated his exit.

Gibson and Hill accused Arnold and Compton of frequently questioning Buckshi’s character and judgment and “badgering” him to agree with them on issues.

“Dan’s excellent work has been subject to relentless and unwarranted assault,” Gibson said in a statement. “Supervisors Compton and Arnold have repeatedly made unfounded attacks on Dan’s integrity and the factual basis of his professional judgment.”

Hill’s statement on May 12 struck a similar chord.

“Dan was subject to too many months of hostile, disrespectful treatment by supervisors Compton and Arnold, which was abetted by Supervisor Peschong,” Hill stated. “There is no way to deodorize what put this in motion: the repeated questioning of his integrity by two supervisors.”

Arnold, who was first elected to the board in 2012, denied having any problems with Buckshi. She praised his ability to “come up with a balanced budget no matter what.”

“I respect the fact that Dan is working with five different people trying to take different stands on particular issues,” Arnold told New Times. “Those statements [from Gibson and Hill] seem very unprofessional and disrespectful. It has to be politically motivated. I don’t know why else they would make those statements publicly.”

Arnold pointed to the often-rancorous tone of Board of Supervisors meetings as perhaps a reason Buckshi looked elsewhere for work.

“It does feel hostile at times to me. There’s been some pretty mean things said,” Arnold said. “There are times that I’m embarrassed at the tone that’s taken during public discourse. If I’m embarrassed then maybe [Buckshi] is too.”

Compton did not return a request for comment from New Times.

Buckshi started his government career in SLO County as an administrative analyst in 2002. He climbed the ranks to budget director, then assistant administrative officer, and became CAO in 2012. Buckshi is lauded for his role in steering the county through the Great Recession and coming out the other side in solid fiscal shape.

“He was the real deal,” Hill said.

Looking ahead, Gibson said he’s concerned about the county’s ability to replace Buckshi.

“What’s worrisome to me is the quality of an individual we’d be able to attract to this job,” Gibson said. “I think the situation here threatens that possibility.”