Grab your beach chairs, big hats, and sunscreen because it’s the beginning of festival season, and one of the year’s most loved happens this Sunday, May 29, at Avila Beach Resort.

This year marks the 23rd annual Avila Beach Blues Festival, put on by Otter Productions Inc., (2 p.m.; all ages; tickets at Vallitix outlets including Boo Boo Records, online at vallitix.com, or by phone at (888) 825-5484). A dazzling array of great performers has appeared over two-plus decades, and this year is no exception when Buddy Guy—on his 80th birthday tour—headlines the beachside concert. 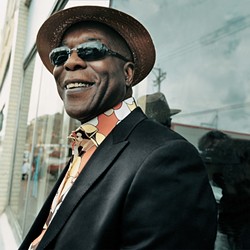 Guy remains one of the greatest blues guitarists ever and has been hailed as an influence by everyone from Jimi Hendrix to Stevie Ray Vaughan.

The former Louisiana State University janitor began performing with bands in the ’50s around Baton Rouge before moving to Chicago in 1957, where he struggled until he was allowed to sit in at the 708 Club by Otis Rush, which led to steady work and eventually a recording contract with Chess Records thanks to Willie Dixon. Once at Chess, Guy began recording on sessions with the likes of Muddy Waters and Howlin’ Wolf, in addition to his own. He moved to Vanguard later, since his arrangement with Chess didn’t allow him to take credit for his session work on other artists’ recordings.

His many rock admirers eventually connected Guy to rock audiences—he toured with the Rolling Stones in 1970, for instance. Over his career he’s also won seven Grammy Awards and 23 W.C. Handy Awards, was awarded the National Medal of Arts, and was inducted in the Rock and Roll Hall of Fame in 2004.

His breakthrough album was 1979’s Stone Crazy! on Alligator Records, which was recorded live during a concert in France. After a nine-year hiatus of recording studio albums, his next three recordings in the early ’90s scored a string of Grammys for Best Contemporary Blues Album. He won his most recent Grammy this year for his 2015 album Born to Play Guitar in addition to a 2015 Lifetime Achievement Grammy Award.

“One of the last things Muddy Waters told me—when I found out how ill he was, I gave him a call and said, ‘I’m on my way to your house.’ And he said, ‘Don’t come out here; I’m doing all right. Just keep the damn blues alive.’ They all told me that if they left here before I did, then everything was going to be on my shoulders. So as long as I’m here, I’m going to do whatever I can to keep it alive,” Guy said in his bio.

Like I said, Guy remains one of the best blues guitarists ever.

Blues singer-songwriter and guitar wiz Carolyn Wonderland is also on the bill, and after the gates open at noon, local collaborators Guy Budd and Inga Swearingen will provide music while folks figure out where to squeeze in their chairs. If you feel spendy, in addition to lawn seating, there are VIP, Balcony VIP, reserved theater-style, and table seating available.

It’s a lot of work to set up the stage at Avila Beach Resort, which is why these events come in groups. Hence, before the Blues Fest, two more events are scheduled starting with internationally acclaimed Mexican acoustic rock guitar duo Rodrigo y Gabriela in their Central Coast debut on Friday, May 27 (gates at 5 p.m.; show at 7 p.m.; all ages; tickets at Vallitix outlets including Boo Boo Records, online at vallitix.com, or by phone at 888-825-5484).

“Rodrigo Sanchez and Gabriela Quintero have been playing together for more than 15 years—first as young thrash metal fans in their native Mexico City, then as innocents abroad and street musicians in Dublin, Ireland, at the turn of the millennium, and finally as the globe-straddling, film-scoring, record-breaking artists they are today,” press materials report. 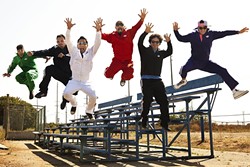 The duo has sold more 1.5 million records and scored films such as Pirates of the Caribbean: On Stranger Tides and Puss in Boots. Incendio will open this Otter Productions Inc. show.

On Saturday, May 28, the fifth annual Avila Beach Tequila Festival returns with amazing LA Latin, hip-hop, and rock act Ozomatli (noon to 5 p.m.; 21-and-older; $35 presale at ticketfly.com or Boo Boo Records). Central Valley country, classic rock, and Latin act August will open the show. Your admission gets you a shot glass and six half-ounce tastings. Additional tastings as well as beer are available for additional purchase, as is food by Ventana Grill.

Wolves in the Mission

Numbskull and Good Medicine Presents will take over the SLO Mission Plaza this Friday, May 27, when Los Lobos performs (gates at 5 p.m.; show at 6 p.m.; all ages; $27.50 advance at Boo Boo’s and ticketfly.com or $33 at the gate) with the Drive-In Romeos opening.

“We’re a Mexican American band, and no word describes America like ‘immigrant.’ Most of us are children of immigrants, so it’s perhaps natural that the songs we create celebrate America in this way,” Louie Perez, the primary lyrics-writer of Los Lobos, explained as he described the band’s 2015 album Gates of Gold, just another in a string of fantastic albums the band’s created since its formation in 1973.

Blending rock, Tex-Mex, country, folk, R&B, blues, brown-eyed soul, and traditional music such as cumbia, boleros, and norteños, this three-time Grammy Award-winning band has remained one of the most diversely talented acts in popular music, from their 1987 smash hit soundtrack and the Ritchie Valens biopic La Bamba to the magical realism of 1992’s Kiko and their 40th anniversary celebration live album Disconnected in New York (2013).

“We live out loud most of the time and share our life this way, but then there are more intrinsic things that happen, and our songs are part of the way we react to them,” Perez continued about Gates of Gold. “We sit down and basically tell people what has happened. We certainly didn’t start this project with aspirations to create the musical equivalent to great American literary works.”

This is an amazing live band that refuses to rest on its much-deserved laurels. 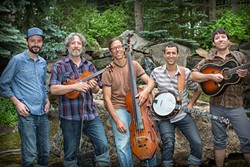 Good Medicine Presents also hosts a pop-up concert at Tooth & Nail Winery on Friday, May 27, with the jangling blues-rock act The Ragged Jubilee (5 p.m.; free). Influenced by the likes of Neil Young, Led Zeppelin, Bob Dylan, and Stevie Ray Vaughn, the band is fronted by the charismatic Ethan Burns, whose “searing and poetic vocals juxtapose Aaron Wick’s rock drums and Chandler Jacob’s rolling bass while Phil Wahl lends a banjo twang to the swelling, punchy riffs of Austin I’anson’s electric guitar backdrop. In short, the combination of lyrical poetry and lyrical music creates a poignant and unique sound,” according to the band’s press materials.

On Memorial Day, Monday, May 30, Good Medicine Presents teams with Barrelhouse Brewing Co. to host folk and bluegrass faves Hot Buttered Rum at The Cliffs Resort (1 to 5 p.m.; all ages; free). This is a wildly entertaining string band, and it’s hard to fault this casual ocean view venue! 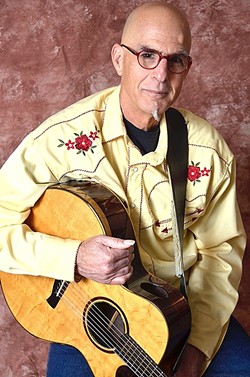 The 33rd annual Arroyo Grande Strawberry Festival features 45 music and dance groups over two days—Saturday and Sunday, May 28 and 29—with 300-plus vendors’ booths, three carnival areas, camel rides, street performers, and a free bike valet service, making it the largest free festival in SLO County! Sunset Magazine called it “the place to be on Memorial Weekend.”

There are way too many acts to list, so you should visit arroyograndevillage.org/strawberry_fest.shtml for a complete line-up, but some highlights include feel-good rockers Ghost\Monster featuring Nataly Lola, blues guitarist Dorian Michael, Americana sounds by Dulcie Taylor and Friends, the Blue Moonshine Bluegrass Band, and Andean musicians Huayllipachia.

This is great fun for the entire family with lots of good eats!

You had me at ‘beer’

The California Festival of Beers (aka BeerFest) celebrates its 30th anniversary on Memorial Day weekend, Friday, May 27, and Saturday, May 28, with a “Throwback 30” themed two-day festival at the Madonna Expo Center and Meadows. Last year they sold 4,000 tickets and decided to scale back to 3,000, so hopefully you can still get yours at californiafestivalofbeers.com). Proceeds benefit Hospice of SLO County.

While the stars of the show are the beers, three great musical acts will set the tone starting on Friday from 5:30 to 8 p.m. with Grammy Award-winning musician and songwriter Louie Ortega and his talented daughter Talia, known simply as Ortega.

On Saturday, Americana blues-rock and soul act The Chase Walker Band plays from 10:30 a.m. until 1 p.m., and then contemporary and classic rock act Generation Gap takes the stage from 1:30 to 4 p.m. The seven-piece band features two lady singers including Kayla Nicole Anderson, a recent graduate of Nipomo High School who’s done a lot of local theater, won the SLO Idol and Lompoc Idol competitions, and so far has made it to call-backs for The X-Factor. 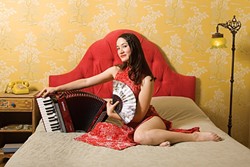 Multilingual chanteuse and accordion and toy-piano player Jessica Fichot returns to Steynberg Gallery this Friday, May 27 (8 p.m.; all ages; $10) with her fiery band to present French chanson, 1940s Shanghai jazz in Chinese, gypsy swing, and international folk sometimes in English. She and her band are wildly entertaining as they transport you around the world on their musical flying carpet.