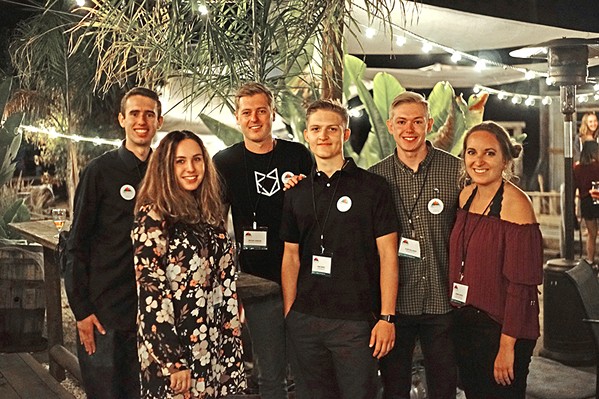 Founder Nathan Johnson and his two colleagues met through various clubs and startups at Cal Poly—the entrepreneurship club and the inventing club, to name a few—and wondered how they could help students with innovative startups get ahead of the game.

"We were also part of the Center for Innovation and Entrepreneurship program, and we all had such positive experiences with those organizations that we wanted to create something that gave back to the community and the university," Johnson said.

That's how the nonprofit Poly Canyon Ventures came to be. The goals of the organization are to provide student entrepreneurs access to early stage capital and to promote socially and environmentally responsible business and investment practices.

Johnson said that when he and his colleagues were attending Cal Poly, there wasn't a group or a club that exposed them to venture capital—money invested in a project, typically a new or expanding business, in which there is a substantial element of risk—or investment with private markets.

"We think it's really important that students are able to learn about that in a socially and environmentally responsible because private investing does carry a lot of influence in our country," he said.

Poly Canyon Ventures has nearly met its funding goal of $18,000, money that will go into investing in three student startups. Each will receive $5,000 to develop prototypes, proof of concepts, and incorporate their business to strengthen their chances of securing a spot on the Cal Poly Accelerator program. If selected, the startups will gain access to $10,000 in initial funding from the Cal Poly Center for Innovation and Entrepreneurship along with office space and the tools needed to launch their business.

Poly Canyon Ventures' goal, Johnson said, is not only to give students firsthand experience in investment but also to give back to the community. He hopes that the startups will contribute to the local economy.

"We want to be able to help the San Luis Obispo economy. By using our projections we're hoping our portfolio companies will bring in hundreds of jobs and millions in funding for SLO County in the years to come," he said.

One of the investments that the organization has made is working collaboratively with SLO City Mayor Heidi Harmon on a project called the Climate Changers Fund. For a startup to qualify, it must meet two criteria: one member of the startup has to identify as female, and the business has to address a problem that could contribute to solving climate change.

"As we look toward the future, we see innovation and the intellectual capital that Cal Poly creates as being key to our city's future success," Harmon said.

With this investment, Johnson and his team hope to promote more people who identify as female in the business field. For more information on the organization or if you have a startup with a great idea, check out the organization's website: polycanyonventures.org.

• Morris and Garritano Insurance is the recipient of Insurance Journal's 2017 Overall Best Agency to Work For award. With offices in San Luis Obispo and Santa Maria, the third-generation family-owned company has increased agency revenue by more than 62 percent over the past three years. The company has earned a spot on the Inc. 5,000's Fastest Growing Private Companies in America in August 2017, coming in at No. 4,243.

• Cuesta College is inviting all San Luis Obispo County high school seniors to the college's fourth annual Promise Day. On Oct. 20, from 9:30 a.m. to 1 p.m., students will have the opportunity to get a taste of college life by touring the campus and learning about Career Technical Education and other academic programs. Students will receive information about scholarships—including the Cuesta Promise Scholarship, which guarantees a fee-free full year of college to all recently graduated San Luis Obispo County high school students. For more information on the free event or to RSVP, contact your local high school or the Cuesta College Advancement Office at 546-3279. Δ

After months of seesawing on how to regulate the marijuana industry in the wake of Proposition 64, the SLO County Board of Supervisors unveiled plans at its Oct. 17 meeting to ban all brick-and-mortar dispensaries in unincorporated communities.

A final decision on adopting the ordinance was continued to Oct. 20 at 9 a.m., after dissenting 3rd District Supervisor Adam Hill refused to vote to extend the meeting past 5 p.m. Hill accused the board of making substantial revisions to the ordinance that hadn't been previously proposed or discussed, and therefore received no public comment.

"I think that's an abuse of process," Hill said, and later added that he thought it was a Brown Act violation.

In a series of "straw poll votes," Peschong successfully sought bans on medical and recreational cannabis dispensaries, the manufacturing and delivery of edible products for recreational uses, and any cannabis manufacturing using volatile substances.

Peschong, Compton, and Arnold said that the "mobile delivery" cannabis distribution model—currently the only legal means of buying and selling marijuana in SLO County—was sufficient for patients and recreational consumers going forward. Peschong said he was concerned about cannabis products in dispensaries attracting youth, and he was specifically critical of "gummy bears."

"I do believe in our county, they say the [mobile delivery] services work very well," Peschong said.

The county's current land-use ordinances already allow for the establishment of medical marijuana dispensaries, even though the county has rejected multiple applications over the years.

"This [dispensary ban] would be a step ," Supervisor Gibson said.

The board's direction ran contrary to the draft policy that was put before them, a culmination of many months of public and Planning Commission input, and it drew groans and gasps from a perturbed audience of mostly cannabis supporters.

When Peschong sought an outright ban on all edible products, both medical and recreational, in the county, an industry stakeholder in the audience muttered, "That's a HIPAA [Health Insurance Portability and Accountability Act] violation."

After Compton voted against allowing volatile manufacturing because she'd "seen the videos of explosions," the room howled with laughter, which was quickly rebuked by chairman Peschong.

The supervisors did not find time during the meeting to discuss restrictions on cannabis cultivation—which has been the most hotly disputed subject since it sets a cap of 50 total outdoor grows.

Acrimony among the board members boiled over several times, most intensely during a debate over whether to ban cultivation in the entire Carrizo Planning Area versus just the California Valley subdivision. When Supervisor Arnold described the state of the Cal Valley as "total chaos" after a recent influx of marijuana grows, Supervisor Hill responded, "I'm sorry you live in the nonevidential world," and then, while looking across the dais, said, "I see the little face you're making."

Peschong then called for a 10-minute break, and one citizen in the audience sighed and said:

"They're not serving the public."