The Pollard House, which dates back to 1876, is on one side; the Victorian-style Jack House and Gardens is on the other side; and the 140-year-old Norcross House is across the street. 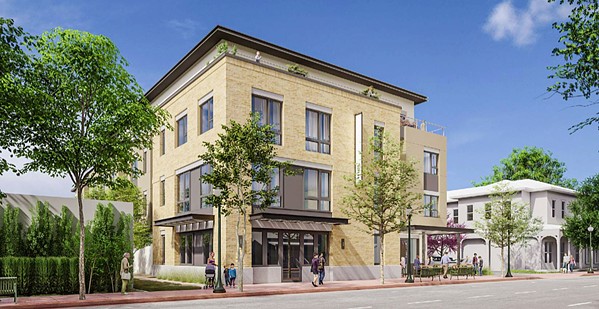 The project, slated to cover the combined lots of 545 Higuera and 486 Marsh streets, would rise above all three historic buildings—providing space for ground-floor retail, eight hotel suites, and 39 market-rate apartment units on top.

"This area has been earmarked for more density and more retail," said Joel Snyder of design firm Ten Over Studio, who spoke on behalf of the applicant at the SLO Planning Commission meeting on Feb. 26. "We're providing much-needed housing downtown."

While the commission ultimately approved the project in a 5-1 vote, the green light came after a tense dialogue between commissioners, city staff, residents, and the developer. While SLO continues to implement a vision for its downtown that's centered on taller, infill development and housing, locals remain divided about how to best balance the city's future with its past.

Residents and commissioners expressed concerns about the size and design of the project and how it would clash with the surrounding historic buildings.

"This neighborhood is at a tipping point," said James Papp, a local historian and architectural preservationist. "It's at a point where it could all go wrong or it could preserve its essential quality."

"I can't believe there isn't some viable thinking that could be done to create better compromises in this neighborhood," Jorgensen said. "It just feels like we're going too far too fast."

Speaking on behalf of newly formed citizen group San Luis Architectural Preservation, attorney Babak Naficy alleged that the city could be violating the California Environmental Quality Act by approving the project. While SLO claimed the project was exempt from environmental review because it's on an infill site, Naficy argued that the historic homes nearby negated that exemption.

"The infill exception here is really intended to be applied where you can clearly see that there are no potential impacts or conflicts with the surrounding area—and that's not the case here," Naficy said.

In his public comments, Naficy described the SLO preservationist group members as "concerned about not just the pace of development, but the effect that it has on the architectural integrity and historic resources of the city."

"This project does sharply contrast in scale with the historic resources immediately adjacent to it," he claimed.

The developer team appeared to bristle at the critical comments and declined to entertain further revisions to the building's design. The SLO Planning Commission had already weighed in on the project at a prior meeting, and the developers felt that they'd followed its direction.

"We believe we're here again because our project's aesthetic choices were seen as too contemporary," Snyder said. "What we set out to accomplish was a revised project that uses the materials that are recognizably SLO—brick and stucco."

At one point, when Commissioner Chuck Stevenson wondered whether the architects could set back the second story a few more feet, property owner Taylor Judkins responded: "I don't mean this to be offensive or short or anything, but you're wrong."

"If you take the step back even 2 feet, it eliminates bedrooms," he said.

After several more minutes of discussion, the commission voted to approve the project.

"We gave the applicant some direction, and I think they've followed that direction," Commissioner Mike Wulkan concluded.

For its next agenda item, the Planning Commission approved another four-story mixed-use development downtown—located less than a block away from the prior project on Higuera Street. "The Lofts at the Creamery" will include ground-floor retail and 36 apartment units.

The pair of developments are closely aligned with the priorities of the City Council, officials said.