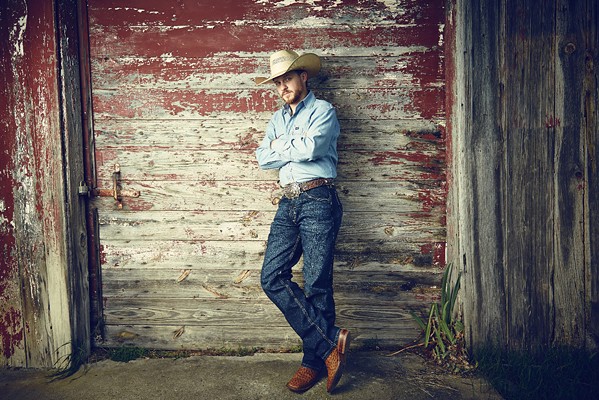 Texas-born singer-songwriter Cody Johnson started performing in his church, formed his first band as a freshman in high school (it included his dad), was a competitive bull rider, and worked as a prison guard in Huntsville, and he's only 30 years old. If that ain't some authentic country singer bona fides, I don't know what is!

This Thursday, Aug.17, Cody Johnson, with opener Josh Ward, plays the Fremont Theater (7 p.m.; all ages; $22 presale at ticketfly.com or $25 at the door) for a Numbskull and Good Medicine Presents show.

All told, Johnson's released six self-produced albums on his own CoJo label, but he didn't get national traction until 2014's Cowboy Like Me, which debuted in the Top 10 on the Billboard Country Albums chart. Suddenly this regionally popular Texas act had Nashville's country music center abuzz.

"I got a lot of 'Who is this kid?'" Johnson said in press materials. "I love that. That was a new horizon. And I'm gonna work to make sure people know exactly who I am."

Johnson's follow-up, 2016's Gotta Be Me, reached No. 2 on the country charts and No. 11 on the Billboard Album chart, demonstrating his crossover appeal.

With a rowdy mix of country, rock, and lyrics that paint him as "a cowboy, raised on outlaw country, who drinks too much, fights too much, and won't apologize for having an opinion," he won a growing legion of fans.

Real cowboy music from a real cowboy? Hell yeah! Add in the rough conditions of Texas prison life he witnessed as a guard and you've got added layers of complexity in his music.

"There's a lonely style of music that a lot of those guys listen to," Johnson said. "I worked in the field for a while, and they sang old prison work songs. Some had kind of lost hope, and I can see now that you have to sing about people that don't have hope the same way you want to sing to give them hope."

Being a guard also allowed Johnson to see the fine line between success and failure.

"You're only a couple of bad decisions every day from screwing your whole life up," he said.

Opening act Josh Ward just scored his eighth consecutive No. 1 hit single on the Texas Regional Radio chart with "Change My Mind." This ought to be a great night of Texas-style country music.

Numbskull and Good Medicine Presents have also teamed up to bring you The Ragged Jubilee on Friday, Aug. 18, at the SLO Guild Hall (7 p.m.; all ages; $15 at ticketfly.com), playing a vinyl release show for their album Pyramid Scheme. The local garage-blues act lists everyone from Neil Young to Black Sabbath and Booker T as influences for their soul-jangle sounds. 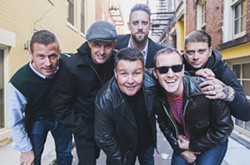 Billed as part of the Boston To Berkeley Tour, the concert promises to culminate with Rancid and Dropkick Murphys sharing the stage for a joint encore. The two bands share history together. Rancid's Lars Frederiksen got the Dropkick Murphys signed to Hellcat Records after hearing a copy of the Murphys' debut EP at a friend's house.

"Rancid is looking forward to hitting the road with our brothers the Dropkick Murphys," Rancid's Tim Armstrong said in a press release. "We will end the night with DKM and us playing songs together. Look out for The Selecter and Kevin Seconds to be on certain shows. SEE YA IN THE PIT!"

Whether you label it soft rock, blue-eyed soul, or pop, there's no denying The Doobie Brothers are hit makers extraordinaire. "What a Fool Believes," "Long Train Runnin'," "Black Water," "Listen to the Music," "China Grove," "Takin' It to the Streets," "Minute by Minute," "Take Me in Your Arms (Rock Me)," "Dependin' on You," and "It Keeps You Running'" are a few of their classic singles that have led to more than 48 million albums sold and four Grammy Awards won.

Public Radio Station KCBX 90.1FM is a regional treasure, providing exceptional programming for the entire Central Coast. With the Sword of Damocles hanging over their federal funding, they're always trying to find innovative ways to raise money to keep the commercial-free station on the air.

For instance, this Saturday, Aug. 19, they're holding a sidewalk sale outside of their studio (4100 Vachell Ln., SLO) from 9 a.m. to 1 p.m., selling items donated by listeners as well as lots of CDs and records. Go buy something!

Next weekend on Saturday, Aug. 26, The New World Strings Project will play a KCBX fundraising concert at Painted Sky Studios (8 p.m.; all ages; $25 reservations at paintedskystudios.com or by calling 927-8330).

The Swedish nyckelharpa, Celtic harp, fiddle, guitar, cittern, and guizouki? Sounds wild! Mason and Weed are members of the Celtic band Molly's Revenge. Frankfurter's nyckelharpa is a keyed fiddle, and Lynne is a multi-instrumentalist known for her Celtic harp. Should be interesting!

Atlanta-based indie rockers The Head, who are on a 40-city U.S. and U.K. tour in support of their new album Space, plays Frog and Peach this Thursday, Aug. 17 (10 p.m.; 21-and-older; free). Brothers Mike Shaw (bass, vocals) and Jack Shaw (drums), and Jacob Morrell (guitars), have been jamming together since high school, and are inspired by "trippy Brits like Stone Roses, Spiritualized, Ride, The Verve, and Echo and the Bunnymen and moody Americans like The National, Scott Walker, and early R.E.M.," according to their bio.

Roots-surf-rockabilly superstars The Cadillac Angels will play Tooth & Nail Winery this Friday, Aug. 19 (5 p.m.; all ages; free). This is a terrific retro act led by Tony Balbinot, who has a penchant for playing killer vintage equipment and has a sultry Chris Isaak-style voice.

The SLO Museum of Art and Hoapili Productions host a Hawaiian summer concert featuring Steven Espaniola this Saturday, Aug 19 (7 p.m.; all ages; $20 at santamariahula.org or by calling Yvette at 878-6793). Espaniola is an award-winning Hawaiian recording artist and multi-instrumentalist performing traditional and original Hawaiian music. "His distinctive falsetto style (leo ki'e ki'e) is complemented with his artistry on the slack key guitar and ukulele," organizers said.

The Deedees (Elizabeth Etta and Owen Hunt) with opening act Peter Yelda & Bob Liepman play Don's String Shop in Los Osos this Saturday, Aug. 19 (7 to 9 p.m.; all ages; $15 at the door). The Deedees are Elizabeth Etta and Owen Hunt, a father-and-daughter duo from Arkansas and Japan, featuring traditional American folk songs as well as original numbers with two guitars and refreshing two-part harmonies. Yelda's a well-known singer-songwriter and luthier, and Liepman is a terrific cello and mandocello player who also plays with Bob & Wendy, Shadowlands, and the San Luis Chamber Orchestra.

Bruce Guynn & Big Rain will be coming down out of the redwoods this Saturday, Aug. 19, to play The Pour House (8:30 to 11:30 p.m.), to deliver their patented "uplifting soulful rock country rock 'n' blues that makes you move." Expect tight musicianship and harmony vocals for this chart-topping act that enjoys both U.S. and international renown.

The "First Lady of Country-Soul," Petrella, plays the Frog and Peach this Wednesday, Aug. 23 (10 p.m.; 21-and-older; free). The Santa Maria resident was drawn to music by her aunt and grandmother, who were lead vocalists at their church. "It was natural for me to follow in their footsteps," Petrella said in an email. "My ultimate goal is to make the genre of country soul a more popular form of music." Δ