Bunnies on the brain

Thirty years ago, Mark Bryan painted Diablo Canyon melting down. He did this in the style of legendary folk artist Grandma Moses, his disaster scene fashioned after her images of quiet, rural America. 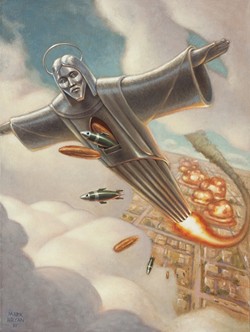 Bryan displayed the work at his April 1, 2011, reception at Steynberg Gallery, where, amid recently resurfaced angst concerning the nuclear power plant, the painting was as relevant as if he had painted it the week before.

While the Diablo work wasn’t done in the artist’s signature style, his artistic fingerprints are all over it. Hi-tech, fanciful, apocalyptic disasters in pleasantly pastoral settings are a Bryan staple, as are illustrations of children’s stories with a searing political twist, or flamboyant animal circus performers. Monkeys and rabbits, in particular, are mainstays; perhaps because of their circus affiliations, but also because he finds them inherently comical. Even in the upside-down world Bryan inhabits, bunnies apparently still reproduce with their trademark efficiency: “Down the Rabbit Hole,” his current show, is positively hopping with them.

A baby bunny gleefully clutches the horned head of Satan, who doesn’t look too pleased. A burlesque bunny dancer entertains a slavering crowd. Still another rabbit—the one whose undying mantra is that he’s late, he’s late, for a very important date—pops his worried head into one of two central political pieces of the show, the Mad Tea Party, Part D’uh.

Bryan painted his first Mad Tea Party piece several years before an American populist movement would appropriate the term in 2009. His provocative tableau depicts key players of the Bush Administration at an Alice in Wonderland tea party. America’s then-president wields a huge knife toward a cake frosted with a world map, his grip reinforced by a larger-than-life Dick Cheney looming above him. Rumsfeld and Rice—the latter in blackface—are discernable in a table of pigs in suits. Oil flows freely from teapot tanks. A herd of sheep crowds the forefront, hoping for their slice. Poor Alice clasps her baby hands to her bosom in an expression of horror.

The painting’s digital replication hit a cultural nerve, whisking its way through blogs and political sites at an alarming clip.

“It just went everywhere like crazy,” Bryan said over coffee at Steynberg. “It was before the tea party existed. So people kept telling me, for the last few years, you have to do a revised version of the Mad Tea Party, because, here they are calling themselves the Tea Party. The tea party in the Alice story is totally illogical, nonsensical, disturbing—which to me fits perfectly, how I see them.”

Part D’uh, while less of a busy painting, has just as much to say. The tea party has moved to the balmy, oil-slicked Gulf Coast. Sarah Palin appears as a buxom, lipsticked, winking Queen of Hearts, comfortably ensconced among Fox News mouthpieces. This time, it appears Alice has grown up a bit; her quivering innocence giving way to jaded annoyance. A caterpillar with an uncanny resemblance to Lincoln spells out, in smoke rings, “Who are you?”

“I’m not like a political junkie,” Bryan explained. “Maybe a fourth of the stuff I do is political.”

The rest of his work is comprised of robots, circus performers, and disturbed plein air paintings. (“I actually like landscape painting and plein air—but I can’t leave it alone,” he freely admitted.) His political satire only emerges “when something pisses me off, or I get a particular idea.”

Indeed, Bryan would be a great landscape painter if he could just keep the UFOs, robots, and nuclear meltdowns out of his nature scenes. The closest he comes is an image of a country path with a monkey unicycling through it.

“I started riding a unicycle this year,” he added offhandedly. “It was my New Year’s resolution.”

The other glorious political satire piece of the “Down the Rabbit Hole” show, Republic of Suicide, is a work to be taken in stride. It’s the nation’s capitol seen from over the stony shoulder of Abraham Lincoln, an atomic blast—the only source of light in the painting—illuminating a grim future. Fundamentalist Christians, armed in metal tanks shaped like churches, roll into town. American imperialists roll out. Homeless drunks and prostitutes huddle in the shadows of the Lincoln Statue, the land’s last bastion of goodness and honesty.

“It’s the last second before Washington is wiped out,” Bryan explained.

Sometimes people get upset by his work, the artist said, though not as many as one might think. (He does, however, recall one instance in which a visitor to the Steynberg Gallery was so angered by the paintings that he threw his cup of coffee at the wall and stormed out.)

Bryan’s latest exhibit also showcases his penchant for taking thrift-store art finds and augmenting them to his taste. A prime example is The Collectors, a plein air of Yosemite into which Bryan has inserted a grazing Bambi caught in the purple beam of an approaching UFO. Bryan bought the painting at an Arroyo Grande thrift store, photographed it, and repainted it, adding a thing or two in the process.

What a Drag, another such augmented painting, depicts a sleeping cardinal having his portrait painted—as a drag queen, once Bryan had his say in the matter. Bryan has also done a number on an otherwise ordinary painting of a wintry wood, which has, as it turns out, quite a rich past. It’s a piece given to him by one Mary Eister, whose first husband, Bryan explained, was Liberace’s nephew. Liberace’s sister Angie gave Eister the painting and believed it to have belonged to the famed pianist. For years, Eister and her husband kept the painting above their mantel, even though they found it hideous. Eventually, Eister gave the painting to Bryan, thinking the artist could salvage the nifty frame for one of his “weird” paintings. Bryan plunked a snow-covered piano and candelabra—a tribute to the painting’s alleged former owner—into the wintry scene, titled the work Goodbye Liberace, and suddenly, the couple desperately wanted it back. Bryan makes things cool again.

Even after many years of painting, Bryan is often surprised to note which artworks speak to viewers. A piece called Monkeys in my Head, for example, has proven a runaway hit: An infant, modeled after a baby picture of Bryan himself, gazes nonchalantly into space. A cigarette dangles from his painted lips. A windshield embedded in his forehead reveals the grimacing primates manning the steering wheel of his mind.

Monkeys in my Head triggered a series of paintings in which humans are controlled by things in their minds, things they’re unable to understand: scars of the past, animalistic urges, or irrational emotions.

“One of the things I like about monkeys is they’re so much like people,” he mused. “That’s probably giving monkeys a bad name, I think.”

Given its sudden relevance, Bryan intends to repaint the Diablo painting, he said. At this point in the interview, as if on cue, former SLO County Supervisor Richard Kresja walked over to the table to show Bryan a map depicting rings of potential radiation from the nuclear power plant, homes within a 50-mile radius shown as tiny dots. Then he excused himself. It was his birthday, he cheerily told us.

It was kind of the Bryan experience in a nutshell. It was colorful, surreal, and surprising. It was intelligent, charismatic, and oddly prophetic. Disaster looms on the horizon, but today, we celebrate!