The sounds of crickets and the crackle of a fire open Dan Curcio’s debut solo album, Bonfire. What follows are a dozen songs filled with hooky, breezy, jangly, back-porch, campfire melodies driven by Curcio’s soulful voice and crisp musicianship. 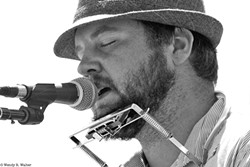 Very much in the vein of Ben Harper, Dave Matthews, and Freedy Johnson, Curcio’s sound is instantly likeable—the sort of music that gets under your skin on the first listen. Sensitive, lovely, earnest music flows out of Curcio, who’s perhaps best know as the front man of Still Time, one of the most popular bands the Cal Poly dorms has ever produced.

He tries his hand at political activism on “End This Thing,” talk-singing “Forty thousand years we’ve been killing each other for greed and material wealth. Blame Cheney and Bush and Rumsfeld, but it’s all just beside the point because we can come together and we can help this country now, make our battle be for goodness, for real change, and for hope, because real change is not going to come from Washington. Let’s go ahead and not wait for that one.”

Lush piano and strings open “October,” and Curcio’s plaintive voice delivers a tender and melancholy love song about time flying and new beginnings. On “Easy,” he sings that familiar coming of age song: “To all old friends I knew so well / We will never grow old we said/  Just the other day it felt / Grade school girls and carton milk// For all those nights we terrorized / Shit got weird when we got high / Often lost but acting cool / High school pranks and the old man’s booze// For every story seldom told / Let’s not forget as we get old/  All the stupid things we done / Still alive and we had fun.”

Overall, it’s a gorgeous, emotionally rich album that closes with Ben. E. King’s classic “Stand By Me,” arranged in an entirely unrecognizable way. It’s a brave but none-too-successful way to close an album upon which Curcio has otherwise effectively laid his emotions bare. All told, however, Bonfire is a tremendously successful solo album from one of the area’s most gifted singer-songwriters.

SLO Brew opens its week on Thursday, Feb. 23, with the return of Trevor Hall (7:30 p.m.; all ages; $12 presale and $14 at the door) and opening act Micah Brown. Just 24 years old, Hall has already created a distinctive pop/rock sound with shades of reggae. You’ll bop to this one! 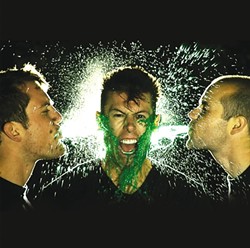 Punk fans, hold onto your Doc Martens! Lagwagon returns to the Brew on Sunday, Feb. 26 (8 p.m.; all ages; $18 presale and $20 at the door), with Cobra Skulls opening. If you don’t know Lagwagon, then where’ve you been for the last two decades? As for Cobra Skulls, they’re poised for greatness! I got turned onto the band by former SLO City Councilwoman Christine Mulholland, who just happened to be mother to Cobra Skulls front man and songwriter Devin Peralta. If you like Bad Religion, Operation Ivy, Against Me, and Social Distortion, you’re in luck, because those are a few of the bands they claim influenced them. I think what I like best about this band is the political intelligence of the lyrics. Take the song “All Drive” off their new album Agitations, for instance: “Now we all drive 85 miles per hour/ Down a crumbling Eisenhower/ Built on hegemony and fear/ Of losing super power/ In a dream of a mile a minute/ I feel suspended in it/ Dark clouds are gathering/ But the weatherman is called a cynic/ And we all drive/ The dream is globalized/ A rite of passage we all drive/ The beast of steel is so majestic/ Some are foreign, some domestic/ Some claim they don’t fan the flame/ But they fuel the fire just the same.” That’s awesome!

On Monday, Feb. 27, check out Unknown Mortal Orchestra (8 p.m.; all ages; $12 presale or $13 at the door). I’ve never heard them, but here’s what their bio says: Ruban Nielson is a New Zealand native who had transplanted to Portland with his band Mint Chicks. UMO was a project conceived as Ruban’s escape hatch to a new musical dimension where his vision of junkshop record collector pop could be realized in a sound that recalled Captain Beefheart, Sly Stone, and RZA jamming on some kids TV theme too dark to ever be broadcast.” White Arrows opens the show, which sounds pretty psychedelic to me. 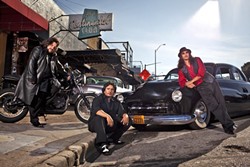 Los Lonely Boys calls their sound “Texican”—a sound the three brothers developed playing behind their father in cantinas and honky-tonks. They quite literally burst onto the scene with the release of their self-titled debut and No. 1 radio hit “Heaven,” which was followed by two more critically acclaimed albums, Sacred (2006) and Forgiven (2008), and the retro EP 1969 (2009). After putting out 2010’s concert album, Keep On Giving: Acoustic Live!, they just released Rockpango.

“I’m super proud of it,” JoJo Garza, bassist and middle brother in the triumvirate, said in press materials. “It’s just progress, maturation, and growth. Growing up, being older, seeing the world we’re living in. It’s also touching base with home.” 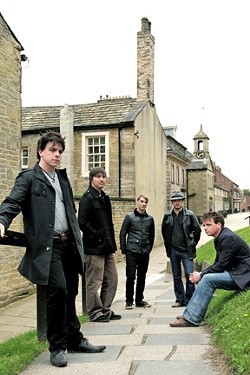 The Dunwells are a five-part vocal harmonizing British band that dips its musical toes in Celtic as well as Americana sounds such as pop, soul, blues, and rock. Theirs is a gorgeous, lush sound exemplified on their new album, Blind Sighted Faith, a stunningly beautiful album. They’ve been garnering gushing accolades from the press, which has been calling them a must-see show.

Said the band’s Joseph Dunwell in press materials, “Last year’s Folk Alliance Conference was an overwhelming experience for us, not only because we were playing our music in America for the first time, which was a dream come true, but because of the positive response we received from fellow musicians and performers. Last year’s Folk Alliance was so important for us, so we couldn’t think of a better place to start our U.S. tour.”

This is going to be an awesome show for acoustic music fans. Student and adult tickets range from $16 to $38 (756-2787). Patrons are invited to attend a free pre-concert lecture presented by Music Department Faculty Member Ken Habib at 6 p.m. in the Performing Arts Center’s Philips Recital Hall.

I already got a little taste of Shurman’s new album Inspiration when they sent me three Mp3s when they were in town last November, and I described them as “awesome, hook-laden nuggets constructed amid all the twang and reverie of outlaw country rock.” Now that the full album has arrived on my desk, I’m happy to report all 11 tracks of this collection live up to the promise of those three teasers.

Front man and songwriter Aaron Beavers is a country rock’n’roll force to be reckoned with. Originally from Texas, he moved to Los Angeles and founded Shurman in 2001. There, they built a dedicated grassroots following up and down the coast. Yet he never quite broke through as he’d expected. In 2008, disheartened with his lack of progress on the West Coast and contemplating abandoning music altogether, Beavers returned to his native Texas, where the vibrant Austin scene and its musicians reinvigorated his interest.

Now with a new kid as inspiration and working with some of the best musicians in that fertile music community, Papa Beavers has never sounded better! Check out Shurman on Tuesday, Feb. 28, at The Z when local favs The Dead Volts and the Mother Corn Shuckers open the 8:30 p.m. show.

The Clark Center will be host to doo wop’s biggest stars on Friday, Feb. 24, at 8 p.m., when original Coaster Leon Hughes & his Group performs classics such as “Yakety Yak,” “Poison Ivy,” “Charlie Brown,” “Youngblood,” “Searchin’,” and more! You’ll also see The Four Preps performing “26 Miles (Santa Catalina),” “Big Man,” “”Down By The Station,” and some hits of the doo wop and early rock’n’roll era, including “Little Darlin” and “Unchained Melody.” The evening wouldn’t be complete without The Drifters Tribute Group, performing “Under the Boardwalk,” “This Magic Moment,” “Up on the Roof,” “On Broadway,” and many more! See award-winning comedian Scott Wood, and backing from the all star doo wop band the American Gold Band. Tickets cost $39 to $49 (489-9444).

Human Nation, a world-fusion-jazz band filled with some of the area’s best musicians, isn’t going to be satisfied staying a local ensemble, and to be sure, their talent won’t be contained by our area, so before they take flight and become a major touring act, check them out on Saturday, Feb. 25, when they play D’Anbino’s at 7 and 9:15 p.m. These guys have been woodshedding for nearly three years, working things out in the studio, and preparing to pounce! The group includes Adam Levine (guitar, composer, and band leader), Dave Becker (sax, flute, clarinet), Brett Mitchell (keyboard), Bill Wingfield (electric and upright bass), and Dean Giles (drums). They’ll be joined by percussionist Darrell Voss for this show. The playlist includes original compositions and creative arrangements of tunes from the likes of Steely Dan, Pat Matheny, and The Beatles.

“I’m kicking off a 3 1/2-month international tour with a show at Linnaea’s Café,” said Amy Obenski. “The tour is a ‘Carbon Conscious Tour’ to raise awareness about the links between the burning of tropical forests and climate change. I also released a new album Nov. 1, so this tour is to support that.” Check her out on Saturday, Feb. 25, at 8 p.m.

“I’ve been livin’ the dream of sorts,” claims Bob Thayer, a dude who used to work at Insomniac Video and play with a bevy of hipster bands before he left town (San Francisco, I think) to continue his music career. He’s returning on Saturday, Feb. 25, for an 8 p.m. gig at the Sanitarium ($5 at the door) with his musical compadre Joe Lewis and opening act Assateague, which Bob describes as an “amazing, kind of a Townes Van Zandt meets Paul Simon easy breezy act.” And if I’m not mistaken, Ghost Porn will also be there. Whoa! That’s a lot of hipness for five clams!

Check out Portland-based The Quick & Easy Boys when they play Sunday, Feb. 26, at Frog and Peach in support of their sophomore full-length, Red Light Rabbit, which features Jimmy Russell on guitar, Sean Badders on bass, and Michael Goetz on drums. They claim to be equally influenced by the Minutemen, Funkadelic, and Willie Nelson. Wowza!