Burnt out: Shifting winds toss the Chimney Fire back and forth between Hearst Castle and Lake Nacimiento

Check out more images of the Chimney Fire.

First, a red glow appeared on the hillside. Then, ash started sprinkling down from the night sky.

When that sprinkle turned into a hail, Jerry Parker of Bryson Hesperia, a community north of Lake Nacimiento, knew that the Chimney Fire was closing in on his 7-acre property and it was time to leave it behind.

“The ash got so thick. It was like it was snowing,” Parker tells New Times on Aug. 23. “I just started grabbing stuff and throwing it in my car. I left assuming I’d never see my house again.” 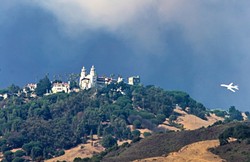 It’s two days after he left his home. An ominous layer of smoke chokes the city of Paso Robles while Parker stands by his car, which is overflowing with his belongings, in the parking lot of George H. Flamson Middle School in Paso Robles.

He and roughly 40 other Chimney Fire victims, including 10 children, spent the previous night inside Flamson’s gym, which the Red Cross turned into an emergency shelter.

Shelter manager Louis Maceira shows New Times around the school grounds. Maceira’s team is from Oregon. After a week of operating a shelter in San Bernardino for the Blue Cut Fire, they drove up to Paso to help with the next fire on the list.

Thanks to community donations, the Red Cross is able to provide the Chimney Fire victims with beds, showers, food, internet access, medical care, and other resources.

“It’s a traumatic experience what they’re going through,” Maceira says, as he points to the rows of cots, a mound of snacks sitting on a table, and a cluster of animal crates that were donated. “We try to keep everything as normal as possible for them.”

Parker and the others staying at the Red Cross shelter are just one faction of the hundreds of locals who are impacted by the Chimney Fire. As of press time, the Chimney Fire had scorched 40,798 acres around Lake Nacimiento, destroyed 45 homes in its path, and continued to threaten 1,898 other structures—including Hearst Castle.

While not everyone who’s been impacted by the fire made the same choice as Parker—some are fleeing to houses of friends and family while others are defiantly staying put on their threatened property—the fire has unquestionably shaken everyone involved and proven to be a painstaking fire fight.

On Aug. 13, a few miles south of Lake Nacimiento’s shore, the Chimney Fire was born by an unknown spark that is still under investigation. The blaze spread rapidly. 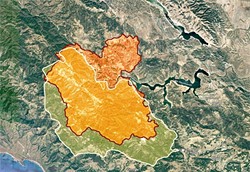 Because the Nacimiento area hasn’t seen a major wildfire in more than 55 years—the last was the Weferling Fire of 1960, which burned more than 50,000 acres in an almost identical area—fire fuel was dry and plentiful.

While you could say the development of the fire was predictable, the behavior and direction of it was anything but that.

By Aug. 17, the fire had grown to 7,300 acres and toppled 30 residences. That morning, Cal Fire Cmdr. Glenn Patterson addressed hundreds of firefighters at the Paso Robles Mid-State Fairgrounds basecamp.

Patterson was frank in his prognosis: The behavior of this fire would be unpredictable, he said. Winds were erratic. The temperature and humidity forecasts were bad. And the fire fight was lacking the resources they’d asked the state for during peak fire season. More than 10,000 firemen were busy fighting active fires in the state—which as of press time include the nearby Soberanes Fire (88,654 acres) in Monterey County, the Rey Fire (31,255 acres) in Santa Barbara County, and the Blue Cut Fire (37,000 acres) in San Bernardino.

Patterson then threw out a number: 29,000 acres. That was the broader perimeter that commanders were determined to keep the fire within. It sounded like a large estimate at the time. After the briefing, public information officers further explained that the number was a worst-case estimate. 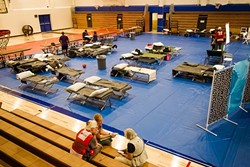 They felt confident in that perimeter because of strategic advantages, like the Rocky Butte Truck Ridge to the west and Lime Mountain to the south. Most of the eastern border was already contained, and the northern end, by the lakeshore, was already blackened—for the most part. It would take an unusual course of events for the fire to retrace its steps back north.

But over the weekend of Aug. 20 and 21, the winds shifted. Gusts started blowing hard and fast out of the east. The fire began moving quickly to the west, and it spilled right over the important Rocky Butte Truck ridgeline.

The fire began spotting out in front of itself. Carried by the wind, fire embers were traveling up to a quarter mile from where they took off, practically catapulting across ridgelines.

By Aug. 22, the Chimney Fire acreage had surpassed the 29,000-acre containment box, and was rapidly crackling toward Hearst Castle.

On Aug. 20, Hearst Castle tours were canceled. Soot shrouded the majestic palace. The fire was between 2 and 3 miles away from the national landmark, and its preservation became a primary concern. Air tankers and helicopters doused the nearby hills with retardant, and multiple engines were positioned on the premises, ready to mount a defense.

Some miles south and west, Cambria residents apprehensively watched smoke clouds billowing in the distance and worried the fire would make contact with their drought-stricken forest. If that happens, fire officials have told New Times in the past, it would be like a match to tinder and hard to stop.

Officials reassured the media that even if the fire reached Hearst Castle, they felt confident they could at least divert it around the castle.

But it didn’t come to that. Once again, the winds shifted dramatically—this time to the northeast.

With the same ferocity that the fire had grown in the west, it started expanding to the north, back toward the Lake Nacimiento communities.

It was like déjà vu. The evacuation orders that had recently been lifted for Lake Nacimiento were reordered. Just as PG&E was starting to resurrect power lines in the communities, the lake was ablaze again. Houses in the South Shore Village community were spared in the fire’s first run, but the second run took out at least five of the homes. Structures north of the lake, like Parker’s, and many others across the county line were suddenly in imminent danger.

That’s where the fire fight stands. As of press time, 4,106 fire personnel were battling the blaze with 333 engines, 107 hand crews, 44 dozers, 17 helicopters, and seven air tankers aiding the effort.

That includes many local fire departments, among them Five Cities Fire, which has a strike team working 24-hour shifts on the Chimney Fire, said Five Cities Fire chief Steve Lieberman.

On Aug. 23, the engine was assigned to Hesperia Lane, a road north of Nacimiento, where they were setting backfires and providing structure protection. On Aug. 24, they got a much-needed rest. 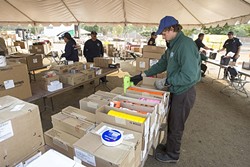 “They’re going to go home and sleep for 24 hours,” Lieberman told New Times on Aug. 23. “Then the next day, it’s Groundhog Day.”

Overnight into Aug. 24, Cal Fire reported some good news. The fire’s growth had slowed. Temperatures weren’t as high. There was more humidity in the air. And the winds didn’t kick up overnight, like they had before.

The longer the fire rages, the more firefighters start to understand the microclimates in the area, said Cal Fire spokesman Craig Poppmann. Throughout the course of the fire, meteorologists have meticulously tracked the fire behavior, the erratic wind patterns, and the varied humidity levels, which when analyzed can be used to improve fire operations.

“The winds are different in one canyon than the canyon next door,” Poppmann said.

Though the fire was only 39 percent contained as of press time, the expected date of full containment, Aug. 29, has not changed. Poppmann admitted on Aug. 23 that the date sounded optimistic, but he said containment numbers can rise quickly once the fire gets under control. 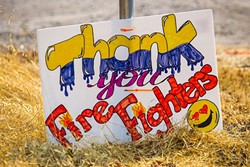 When asked what the new estimated possible size of the fire could be, Poppmann shook his head and said they didn’t have that number.

They can only hope the weather cooperates.

“This type of erratic fire behavior isn’t a surprise,” Poppmann noted. “But that doesn’t make it any less unpredictable.”