You know, that one song you love to belt out like Mariah Carey. You sing it in the shower, in the car, and while walking through various parking structures. Maybe you sing it like a boss, or maybe you sing it so out of tune it is unrecognizable to passersby.

Who cares. It’s your karaoke jam, and you deserve to let it ring out. It's your God-given right as an American in a bar on a weeknight. My jam? A toss-up between “Fist City” by Loretta Lynn and “Hanging on the Telephone” by The Nerves—popularized by everyone’s favorite pint-sized blonde punkette, Blondie. My singing venue of choice: Camozzi’s in Atascadero.

Weirdly, I tend to get more nervous—sweaty palms, noodle knees—when singing karaoke, despite the fact I am no stranger to the stage. My theory: Karaoke is the people’s performance art, the kind of collective groove that can bring an entire room of mismatched people together, or, as can so easily be the case, send a room full of people running for the smoking patio. It’s not about how good you sing the song. It’s about how much of yourself you bring to it. It’s about getting real, dude. And that’s the scary part.

Hopeful rock stars will dust off their vocal chords for SLO Brew’s Karaoke Contest, kicking off this Friday, Dec. 19 (7:30 p.m.; all ages). Not only can hopefuls live out their stage fantasies, but one lucky lass or lad will walk away with $500 in his or her pocket. As if you needed cash to make this deal sweeter, right? I would sing karaoke for free, anytime, anywhere. But that’s just sad.

Participant selection begins the night of the event at 7:30 p.m. (sharp!), so don’t spend too much time getting your eyeliner just right. Remember: You are on stage. With a huge crowd looking at your sweaty face. No pressure.

Each participant will receive a ticket upon entering the event for submitting to perform. However, attendees will also be able to enter a friend’s name on their behalf. That means the people who bring the most friends to support them will enjoy the best chance of being chosen to participate. It’s all about the odds, so grab your study buddy, your mom, and your old neighbor. 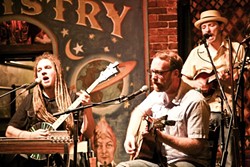 A talented group of 15 will be selected to perform in round one, which will then be narrowed down to five for round two. But wait, there’s more! SLO Brew will draw a bonus name after round one from the hat (at random) to be added as an automatic second round contestant. So, if you don’t get chosen in the original first 15, you still have a chance to sing as the sixth finalist and completely skip the first round (so don’t head out early).

Round three will consist of two finalists battling head to head for the $500 prize and “Karaoke Champion of the World” title. All you must do is prepare three rockin’ songs to belt out (no duets or original material, FYI). The whole shindig is hosted by Central Coast karaoke celebrity Brotha “C” and judged by KZOZ radio personality Suzanne Schonig, local scenester and music snob Sean Murphy, and Santa Maria native and Monstar Music producer Nathan Berber.

Good luck, and may you hit the high notes with grace. For more information, visit slobrewingco.com.

Portland’s The Small Souls and Shoeshine Blue will share the feature spotlight at Shell Café in Pismo Beach Dec. 18 (6:30 p.m.; all ages; no cover), bringing some weird but awesome sounds to your ears. 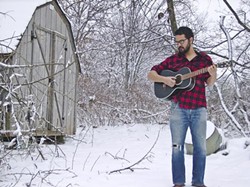 Small Souls, known for their “elegant, near-symphonic folk,” formed three years ago as a collaboration between singer-songwriter Brian Rozendal and multi-instrumentalist Bryan Daste. Christian McKee joined the band, adding mandolin and layered harmonies. The fringe folk band is touring this winter to raise money and support for their second studio album.

“Lo-fi, literary, blues, folk, gospel, and weirdly doo-wop” aptly describe Shoeshine Blue, which consists of songwriter Michael Apinyakuls and a talented ship of pirates who follow him into the great sea of song.

To repeat what another reviewer has said (because it can’t be outdone): “Imagine a lovely ghost singing at an old bluesman’s funeral.”

Just go with it.

Shell Café is located at 1351 Price Street, Pismo Beach, 773-8300. The showcase includes one featured act and others playing four-song sets. No cover charge, but a tip bucket is passed during the featured artist’s set. Their Thursday showcase is a co-production with Madeline Royal of Love Live Music.

Maurice Tani will bring a wagon full of twangy modern country to Paso Robles’ Sculpterra Winery on Dec. 21 (1 p.m.; all ages; no cover charge). San Francisco-based Tani has been a fixture on the Bay Area alt-country scene for more than a decade with his band 77 El Deora and previously sang and played guitar for the seminal Motown-style party bands Zasu Pitts Memorial Orchestra and Big Bang Beat.

The San Francisco Chronicle has praised his “twangy modern country sound” and called his songs “wry yet romantic, tender but aggressive.” Maruice will be joined by Mike Anderson on bass guitar. 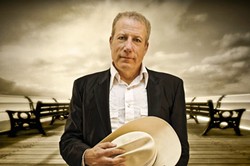 Maurice recently released two albums—a studio recording with 77 El Deora called Blue Line and Two Stroke, a collection of acoustic duos with Anderson. The website No Depression calls the sound “hillbilly noir”— “at once familiar, ethereal and beautiful.” Maurice calls it “cinema for the blind.”

Songwriters At Play holds showcases every Sunday from 1 to 4 p.m. at Sculpterra Winery, located at 5015 Linne Road, Paso Robles. For more information, call 226-8881. The showcase includes one featured act and others playing four-song sets. Organizers pass the tip jar during the featured set, otherwise no cover.

Finally, a rare chance to sing along without getting “shushed” by those stuffy people seated behind you. Get ready for the seventh annual Arroyo Grande Rotary Club Christmas & Holiday Sing-Along this Dec. 21 (4 p.m.; Arroyo Grande Clark Center; $6 to12). It’s your chance to raise your voice and partake in holiday harmonies. 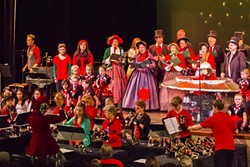 Titled Let It Snow, the event will feature a range of community performing arts groups, and audience members are encouraged to jump in on the fun.
Sponsored by the Arroyo Grande Rotary Club, the show will present a range of wintery Christmas and holiday songs with spectacles by the Village Carolers of Studio Sing, Sing, Sing; the Arroyo Grande High School Choir; the Triple Threat singers and dancers from CDMA; the Grande Bell Ringers from the Arroyo Grande United Methodist Church; and the Estero Brass Quintet and vibraphonist Brad Lusk.

Audience sing-alongs will include “Deck the Halls,” “Jingle Bells,” “Silent Night,” “The First Noel,” and “Frosty the Snowman.”  The grand finale crowd pleaser will be the traditional singing of “The Twelve Days of Christmas.”

Arrangements are now being made for special appearances by Santa Claus and Frosty the Snowman—you heard it here first!

Plus, enjoy free holiday goodies and drinks, which will be provided at the end of the show.  Net proceeds from this event will be donated to the music and arts programs of various South County schools.

Tickets are available from the Clark Center Box Office at 489-9444 or clarkcenter.org. Special family discount pricing (in advance only) allows up to six family members to attend for only $30.00. Not bad for some top-notch holiday entertainment.

A big hearty congrats to Amaya Rose, the 15-year-old Paso Robles fiddler who recently played with none other than outlaw country legend Merle Haggard and The Strangers at the Canyon Club near L.A.

Not only did Rose open Haggard’s show, but after her set, The Strangers also backed her on the old fiddle tune “Soppin’ the Gravy,” causing the sold-out crowd to go wild.

This specific tune was at the request of Haggard, who had first heard Amaya play fiddle some seven months ago. At that very first meeting, she knocked his boots off.

“When I first met Amaya, she played an old classic very well, then I thought I would test her, and asked, ‘Do you know anything older?’” Haggard said.

The country star was surprised to learn she certainly did. I, for one, am not shocked at all.

The first time I saw the blonde-haired cowgirl perform, she was knee high to a grasshopper. Maybe you’ve seen her playing during community events in North County, including Templeton’s Founder’s Day, or maybe you’ve seen her sawing that fiddle with Monte Mills and the Lucky Horseshoe Band, which she joined at the age of 12.

It's my opinion this young lady is truly going places, so enjoy her music while she’s still hanging around SLO County!

In 2015, be sure to catch her playing fiddle in the Lucky Horseshoe Band, doing her single act around the Central Coast and performing opening slots in some big-name acts.

Singer-songwriter Daniel Isle Sky of San Diego will play Linnaea’s Café Dec. 20 (8 p.m.), with a mix of original tunes and popular covers. The artist moved to California this summer after landing a spot at the Del Mar Fair, and Cali’s been good to him thus far.

Mainly, it’s warmer here than in his hometown of Santa Fe, and people dig a laid-back vibe.

“I used to be the bass player in some hard rock bands, but I put down the bass in favor the acoustic when I got fired because I didn’t drink enough,” Sky said. “I look the rocker part but my gentle voice has been compared to James Taylor.  I’m looking forward meeting the locals in SLO.”

Well, you heard the man! Go say “hi” to this acoustic songwriter in rocker’s clothing—and don’t bother inviting him to your next game of beer pong. He is not interested.

Glen is still on vacation and may never come back. Just kidding! He’s back next week. Send your music suggestions to gstarkey@newtimesslo.com.