But what is it about!?

Of all the art media, dance should, theoretically, be most accessible. Communicating with the body is, after all, undeniably human: something we all understand, something we do without really learning how, something we cannot help but do. And yet, as Diana Stanton noted, many audiences feel intimidated by dance. Unlike music, she said, which is allowed to simply be a beautiful expression, dance pieces are often expected to be “about” something—which is a little absurd, if you think about it. (I blame The Nutcracker.) 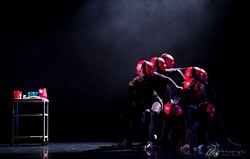 “What is Beethoven’s Ninth Symphony about?” Stanton asked rhetorically.

A Cal Poly associate professor of dance and the director of the university’s Orchesis Dance Company, Stanton is no stranger to the dance concertgoer’s urgent need to “get it,” as if each piece contained a single encrypted message.

The truth is that Stanton, like many other choreographers on the program of Orchesis’ 43rd annual dance concert, Suspension, which opens Friday, Feb. 1, at Cal Poly’s Spanos Theater, rarely knows what a piece is about when she begins the creative process. In fact, as the new work evolves, so too does its intended meaning. Suspension is a classic example.

This year’s program stands out as one in which many pieces came to being in collaboration with the dancers. David Capps’ “Night Flight,” set to Chopin’s Nocturne in D Flat Major, was partially the result of several “assignments” given by the New York-based choreographer to the Orchesis dancers. Dancers were told, for instance, to experiment with creating horizontal “layers,” or to build a dance around a particular character. These assignments were recorded and given to Capps, who used them to craft, in his words, “a meditation on complex choreographic procedures, the beauty of stillness, generosity of weight and breath, and capacity for listening and doing at the same time.”

“Night Flight” begins and ends in silence—that is, save for the audible breathing of the dancers, and the pounding of bare feet moving in unison, often forming angular shapes across the stage. The dancers seem to flirt with the darkness: In one moment one of them appears surrounded by a group of creatures, creeping low to the ground. She attempts to escape, but eventually falls into them, giving in. Others, standing upright on the stage, lean back with a look of surrender, but are delicately pushed back to standing by another dancer behind them, as if the fates had decided it wasn’t their time.

Keith Johnson, choreographer and professor at Cal State Long Beach, contributed the highly theatrical and profoundly moving “Tentful of Marks.” Danced to the Scud Mountain Boys’ melancholy, acoustic cover of Cher’s “Gypsies, Tramps, and Thieves,” the piece seems to pit two pairs of dancers, seated—for the much of the piece anyway—in chairs, against one another.

Due, perhaps, to logistical necessity, “Tentful of Marks” becomes an interesting study in how gender affects the meaning of a piece. Johnson’s “Marks” is danced on some performance dates by an all-female cast, and on others by two men and two women. When danced by William Bassett and Brandon Takeshi, opposite Kelsey La Tourette and Ella Richards, “Marks” carries strong homoerotic undertones that simply don’t read the same way when the piece is danced by four women (Tiffany Davids, Hannah Haggerty, Anna-Lisa Taylor, and Jenna VanderDoes). In the first pairing, when the women work their way across the stage to the men, the overture feels like an overt seduction—and the gesture of one man thrusting the other’s head into his crotch becomes a decisive rejection of heterosexual attention. When danced by four women, the lines are significantly blurrier.

This year’s program also highlights the talents of five student choreographers—well, really only four: Orchesis veteran Misty Moyle recently graduated with a degree in biology (she also minored in dance, as well as in women and gender studies). Moyle’s original piece “This is What Science Looks Like” is a visual representation of the scientific processes used to detect infection.

“I research with Dr. Candace Winstead studying the effects of Vibrio cholerae and Vibrio parahaemolyticus on Intestinal Epithelial Cells,” Moyle wrote in an e-mail, following a phone interview in which I mostly just asked her to spell things. “I work specifically on immunofluorescence microscopy, but the dance features an ELISA array and Western blot section as well,” she continued.

And you thought you were reading an arts story.

“I usually do really emotionally driven, activist-driven pieces, so this was a bit different,” Moyle said.

“This is What Science Looks Like,” by contrast, was created “more specifically with the goal of saying ‘Hey, art is relevant to scientists.’” The resulting piece, which was inspired by a contest called Dance Your Ph.D, is set, fittingly, to the music of the sci-fi cult classic Tron.

Suspension opens with Stanton’s “A Time, A Place,” a piece set to contemporary Mexican composer Arturo Marquez’s Danzón, an orchestral piece with a distinctly Latin American flavor. Stanton rarely uses classical music in her work, she said, but she made the exception when given the chance to perform two of the pieces from Suspension to a live orchestra in an upcoming collaboration with the university’s music department and the Cal Poly Symphony.

(Though they will be performed in Suspension to recorded music, Stanton’s “A Time, A Place” and Orchesis Assistant Director Michelle Walter’s piece “Sinuous Dreams, Enchanted Streams”—the latter set to Bedrich Smetana’s “Die Moldau”—will be revived for performance to a live orchestra in a March 9 concert in the Performing Arts Center.)

To Stanton, “A Time, A Place” conjures “some sort of hypothetical, mystical rite of passage ceremony,” full of playful challenges and strange rituals. Danzón starts off slowly, even rather inquisitively, its wistful wind instruments winding around delicate limbs. Yet as it escalates in drama and urgency, so do the dancers’ games: flying and falling, taking turns running up a human flight of stairs. To my delight, Stanton herself appears in the piece, her confident solo setting a lofty standard for the prancing, elastic young things onstage.

At least, I think that’s what this is all about. ∆