By the people, for the people: Citizens' Congress aims to create nationwide political change from the Central Coast 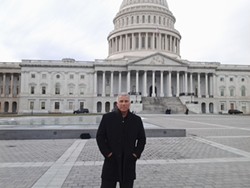 In the thousands of hours Ostrander and his local team of volunteers have invested in organizing a major political event—Citizens’ Congress—here in San Luis Obispo County, he’s had more than a few people offer up excuses.

When confronted by such excuses and doubts, Ostrander said he simply shrugs and moves on to the work at hand: eliminating the corruptive and corrosive influence of money in politics.

“With Citizens’ Congress, we were tired of following, so we decided to take the lead,” he told New Times. “Apathy and inaction are what have led to the situation we’re in today, so we try to avoid those at all costs.”

Years in the making, Citizens’ Congress is “the first national gathering of legislators, scholars, and public advocacy groups combating the corruptive influence of money in our political system,” Ostrander explained.

The Congress will meet between June 2 and 5 at the Cliffs Resort in Pismo Beach, with an end goal of a unified message, platform, and plan for comprehensive campaign finance reform. All are welcome.

“We want to establish a clear set of goals and pragmatic steps to get there,” Ostrander said. “We want to get everyone behind one big rock that we can then start pushing up the proverbial hill.”

Ostrander, a local farmer and developer, is the director of Citizens’ Congress. He said that his personal observations about the blatant inequalities and failures of American government motivated him to start the intensive and “aggressively nonpartisan” volunteer effort.

“Everything we’re taught about the brand of Americanism is mostly a myth,” he said. “Ninety percent of the time, the person who spends the most money wins the election, and so equal representation doesn’t really exist.”

When pressed for specific examples of campaign finance problems, Ostrander pointed to the Sandy Hook shooting in late 2012. He said that about 90 percent of the country supported gun control legislation in the wake of the shooting, but the bill to that effect drew only 54 out of 100 votes in the U.S. Senate—so the legislation died.

Ostrander said that intensive lobbying on the part of the National Rifle Association was to blame for that failure, as money bought influence for the pro-gun lobby. Ostrander also mentioned watered-down Wall Street reform, gerrymandering, and discriminatory voter ID laws as consequences of politicians being beholden to their donors and lobbyists.

“Our representational political system is set up fully intending to be fair, but it simply cannot compete with the millions of dollars that businesses and their lobbyists can now use to combat that system,” Ostrander said.

Though the Citizen’s Congress team is well researched and quite knowledgeable about the failures of the current campaign finance system, they’re much more interested in discussing and working toward realistic solutions.

Dianne and Norm Jackson, a pair of retired teachers who live in Atascadero, have also been deeply involved with Citizens’ Congress. They said they’re proud to be working toward compromise and solutions regarding money in politics.

“I have personally contacted 179 congressional offices on the phone with an invitation to Citizens’ Congress,” Dianne said. “Some conversations have been better than others, but it’s important to know that we just can’t just sit back and let it be.”

“We saw political things happening that just weren’t right,” Norm added. “To say that money is the same thing as free speech and we can’t regulate it—that’s just asinine.”

Dianne said that she (along with the future message-making efforts at Citizens’ Congress) fully supports a “multi-faceted approach” toward reforming campaign finance by branching down several specific avenues.

Those avenues include possible amendments to the U.S. Constitution, bicameral legislative options, rule-making changes at agencies like the Federal Election Commission and the Securities and Exchange Commission, and expanding/promoting “public financing”—the practice of using matching federal funds to pay for the valid expenses of political campaigns.

“The voices of the public are not being heard in Washington because private money has a huge megaphone,” Dianne said. “If enough of us wake up and stop being complacent, then something can get done.”

Ostrander said it’s impossible to know exactly how many attendees Citizens’ Congress will draw, but he anticipates and hopes for a robust turnout.

Another big moment for Citizens’ Congress was when nationally syndicated and Pulitzer Prize-winning columnist Leonard Pitts wrote a column in early April that praised Ostrander and the event.

Dianne said that Citizens’ Congress organizers received calls and emails about the event from all over the country after that column, and added that it was “gratifying to give people some hope” despite their frustrations with the political system.

Ultimately, Ostrander said he hopes Citizens’ Congress will produce a “concise, personal, and actionable” message that will be a rallying point for reform, drawing from as many voices and sources as possible.

“It has to be a collective effort,” Ostrander said. “That’s the most important thing we can do to succeed.”

To find out more about Citizens’ Congress, visit the event website at citizenscongress2014.org or call 466-4429.