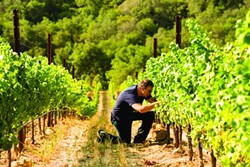 CABs of Distinction, one of the newest local wine events, has rapidly taken the title as the most prestigious Paso Robles celebration. The Paso Robles CAB Collective (PRCC), a group of vintners who produce outstanding cabernet sauvignons and Bordeaux blends, organized their inaugural CABs of Distinction event in as little as three months last year. Yet they received widespread support from the enthusiastic wine industry and consumers. Clearly, it was a long-needed tribute in celebration of some of the finest wine varieties grown in Northern SLO County.

The PRCC was started by seven highly-motivated producers in the region who were willing to stake their money and their reputations on this effort. Among the founding wineries were: Adelaida, Chateau Margene, Daou, Eberle, J. Lohr, Justin, and Vina Robles. This collaborative group also worked to encourage their neighbors around them to produce better wines by sharing information about ideal clones and improved growing conditions necessary to craft world-class cabernets. Although the PRCC members were confident that Paso Robles would excel at producing world-class cabernet sauvignons and Bordeaux style blends that rival those in Bordeaux, France, they still had to prove it to the world. And that’s exactly what they’re doing through this remarkable celebration that now takes place over five days.

Credit goes to Daniel Daou, co-owner of Daou Vineyards, who built his family’s winery in the site formerly home to the historic Hoffman Mountain Ranch (HMR). He spared no expense in devoting his winery to making cabernet sauvignons and Bordeaux blends that equaled the world’s finest cabs.

It was the passionate winemaker’s strong belief that he and his neighbors needed a cabernet society. “I went to other cabernet winemakers and the reaction was immediate,” Daou told me during an interview last year. He quickly acquired the six other founding members and soon neighboring cabernet producers called, hoping to join the prestigious group.

Then, Daou proudly compared the PRCC to a revolution. Not surprising from a man with French bloodlines. But knowing that cabernet lovers are typically collectors, he believed those consumers would come out of curiosity and be delighted by the discovery that Paso cabernets and blends are truly outstanding.

The PRCC members can stand proud of the inaugural PRCC grand tasting and its tremendous appeal to cabernet connoisseurs. Not much later came the announcement from Wine Enthusiast Magazine proclaiming Paso Robles the wine region of the year. It was up against other up-and-coming wine growing regions around the globe, akin to being chosen as the cover girl for Sports Illustrated Swimsuit 2014 issue.

Such success ensures the second PRCC CABs of Distinction event will show up the inaugural event with more exciting comparative tastings, winemakers’ dinners, and educational forums. That’s exactly what these ardent winemakers have done. 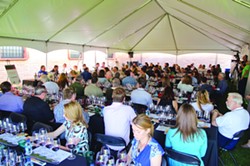 This year the CABs of Distinction Gala will have sommelier events that include a “cab camp,” and three days of educational tastings and tours through Paso Robles. They’ve created more media and trade tasting events to better spread the word about this singular celebration. They also added more enlightening tasting experiences for consumers. The latter events include many enticing activities at the PRCC member wineries, including winemaker panel tastings, barrel samples, vineyards tours, pairing cheese with wine, and winemakers’ dinners at wineries or in Paso’s finest restaurants. Daou Vineyard will definitely be in celebration mode. Visit the website to discover which events appeal to you at pasoroblescab.com. There, you can make reservations and purchase tickets for the gala.

On Saturday, April 26, the CABs of Distinction Gala begins at 11 a.m. and takes place at River Oaks Hot Springs, and will happen rain or shine. Purchase the luxury VIP event ($225 per person) and it provides a full day of exclusive meals and wine tastings. It begins at Thomas Hill Organics in downtown Paso Robles where you’ll enjoy a vintner-hosted reception followed by a multi-course lunch paired with Paso cabs and blends. Following lunch, guests will ride the complimentary shuttle to the reserve and grand tastings at River Oaks. You’ll also get exclusive access to a VIP lounge throughout the day. At the day’s end, luxury VIP ticket holders will be shuttled downtown for an easy return to their hotel or transportation.

The premium-reserve tasting ($150 per person) provides early access at 1 p.m. for the reserve tasting, the VIP lounge, and grand tasting. Or you can buy tickets to the grand tasting ($90 per person) starting at 2 p.m. where you’ll sample all of the PRCC members’ wines, enjoy charcuterie and cheese from expert fromager Zina Miakinkova. You’ll also enjoy lunches prepared by notable local chefs from Robert’s Restaurant, Crush, and Avant-Garde caterers. They will also have Monterey Chocolate Company providing chocolate samples, barrel-making demos, glass-etching demos, and live music.

The PRCC’s mission is to be inclusive for all wineries, regardless of size. This year they invited four non-member, garagiste wineries to attend the gala: Clos Solène, Falcone, L’Aventure, and The Farm.

“Over the past year we accomplished quite a lot. The first year it took a convincing effort to draw 16 wineries. This year we’ve grown to 28 wineries, and have more waiting in line to join us,” Daou explained of the impressive efforts by members to grow the PRCC.

“We’re focused on wine buyers from Southern California who are used to buying Napa Valley cabernets. Many of them don’t realize they can come to Paso Robles and taste cabernets that are equally impressive.”