Morro Bay is full of problems and short on water. 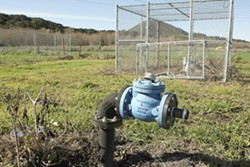 There was the slightest scent of manure on a picturesque day near well 10A in the Chorro Valley. The soil at a small city-owned plot of land was spongy from recent rain percolating into one of Morro Bay’s few local sources of water in the Ashurst well field—not that it mattered. All of the city’s wells there have been shut down and if they were running, no one would want to drink the water. And if they did want to drink it, the city wouldn’t pony up the money necessary to treat it and pump it back to them.

As some residents have come to say—the ones who live on the well field—they’ve been drinking and bathing in “caca water.”

Morro Bay depends heavily on state-supplied water, much more so than its own aquifers. And the state has typically been a good provider until a recent drought. This year Morro Bay residents may get as little as 5 percent of the roughly 1,300 acre-feet per year they’ve come to depend on.

In 1997, the same time the city received state approval to pump the wells, it also received its state water supply. Depending on the year, Morro Bay was receiving between 80 and 99 percent of its water from the state, according to Morro Bay Utilities/Capital Projects Manager Dylan Wade. When state water was abundant, the Ashurst and other wells functioned as a reserve.

Now left high and dry by the state with only its limited local water supply, Morro Bay is further hampered by two restrictive state regulations that both limit when the city can pump from its wells and—in a more recent crackdown—state health officials stopped the city from pumping five of its seven wells due to contamination.

For city water officials the solution to their problems couldn’t have been simpler: Just shut down the wells and cut services to the people who previously received that water. That’s exactly what they did, or at least what they’re trying to do.

In January 2009 the California Department of Public Health informed city officials that five wells in the Ashurst field—located between SLO and Morro Bay at the base of the seven sisters—broke state water-quality standards for nitrates as well as some positive tests for sewage contaminants. (The city shut down another well in the field about a decade earlier.) State officials ordered the city to stop pumping from the wells unless the water was either treated or diluted with state water before going out to residents. A few months later, city officials informed the residents of 11 homes they would no longer be receiving city water.

Interestingly, all 11 homes receive city water, but are situated outside the city limits directly over the Ashurst field. And with limited infrastructure, those residents were sometimes receiving water directly from the wells. But only those homes and no one within the city was denied water. The problem for the city—that ultimately screwed homeowners—is there’s only one pipe running from the Ashurst wells. In other words the city can pump water in only one direction at a time, which means the city lacks the infrastructure to pump from the wells to be blended with state water and back to the 11 homes. After the shut-down order, city officials would have to pony up and build another line to keep serving those homes.

“So we’ve got quality and quantity issues out there,” said resident Linda Stedjee. Stedjee isn’t one of the affected homeowners but is part of a group of disaffected residents becoming increasingly critical of the city over its water problems.

Another problem: The city’s only functioning well is subject to another state regulation. Well 11A lies outside the Ashurst field and Public Health Department restrictions, but falls under earlier State Water Quality Control Board pumping restrictions enacted when the city was first permitted to tap water in the Chorro Valley. Under the agreement, the state permitted the city to pump water only when the Chorro Creek flows high enough so that it won’t be sucked dry. City officials were required to install gauges on the creek and submit annual reports to the state.

That was in 1997 and little happened until resident John Jones complained to the water board that the city hadn’t installed any gauges and submitted less than half its required reports. State officials cracked down again and city officials agreed to install the gauges and begin submitting daily reports to the state beginning this year.

“The bottom line is Morro Bay never did anything and they just pumped when they wanted,” Jones told New Times. His property is near well 11A, which is the cleanest city well and now the only one the city can use.

Jones, other residents, and the California Department of Fish and Game have alleged the city’s illegal pumping completely dried portions of the creek at times. According to Fish and Game, such over-pumping could trap steelhead in isolated pools and hinder the flow of water into the Morro Bay National Estuary.

While much about the city’s water is unknown, the only thing that now seems certain is Morro Bay—particularly residents of 11 homes—has a rough year ahead. City officials recently began meeting with a few residents, which has quelled some of the more outspoken of them who have since become squeamish of speaking out further in public and hurting a potential deal with the city to keep receiving water.