Wally Barnick likes to joke that he learned to play the bass to ensure a "place in the band." What he really wanted to do was sing, but when you play with a bunch of talented pickers who can also sing pretty well themselves, there's no place for a musical freeloader like a prima donna non-instrument-playing singer!

His bass has served him well over the years. In 1975, he joined the well-known bluegrass and beyond group, the Cache Valley Drifters, where his voice sweetened "the high end of the vocal blends," he said, while his bass "held down the low end." They're still together 45 years later!

He's also a member of the folk and bluegrass trio Crary, Evans and Barnick, as well as the prog-bluegrass trio The Hay Dudes. He's a busy guy, but that hasn't stopped him from recording his second solo album, Wally Barnick and the Trail Boss Troubadors, which he's on a mini-tour to support, starting with two local gigs.

On Friday, Feb. 21, Barnick and his band will play Painted Sky Studios (doors at 7 p.m.; show at 8 p.m.; all ages; $25 at (805) 927-8330). Tickets are almost sold out. On Saturday, Feb. 22, he'll play a Musica del Rio house concert (email fred@musicadelrio.org for tickets and details). Barnick and company will also make stops in Ojai, Culver City, and Solvang. Visit wallybarnickmusic.com for more info.

As for his new album, it's filled with what Barnick is calling American, not Americana, music—"ranging anywhere from Bakersfield country, rock 'n' roll from every decade that it has existed, to folk and bluegrass," he said.

Barnick said his new album really started "in the fall of 1974," when he met Stephen W. Peters, Richard Riesser, Bo Dugger, Mark Stoltenberg, and Mark Welch, who he called "extraordinary pickers and singers." They all played together under the name Flap Jaw, and shortly thereafter, Barnick was introduced to David West and Bill Griffin of the Cache Valley Drifters. Many of these musicians wrote the songs on the new record, and West acted as co-arranger and co-producer with Barnick.

West is also part of the Trail Boss Troubadors, playing guitar, banjo, mandolin, and vocals. The group also includes Kenny Blackwell (guitar, mandolin, and vocals) and Tom Lackner (percussion). Through it all is Barnick's warm, rich voice. It's a wonderful album filled with great songs. This is the good stuff, people! Don't miss it!

Get your P-Funk on!

If someone asked you to describe P-Funk, what would you say? Are they about psychedelic culture, science fiction, outlandish fashion, or surreal humor? 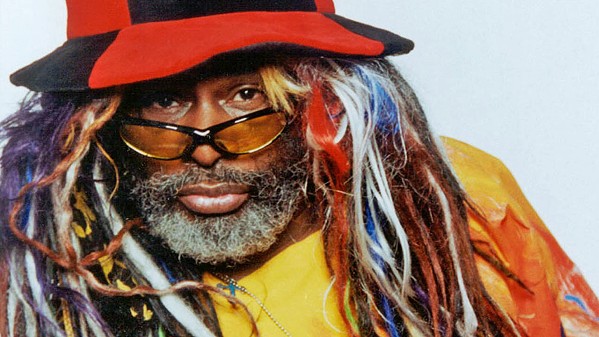 The revolving-door membership of Parliament and Funkadelic—both active since the 1960s under the command of funk master George Clinton—are lauded for their Afrofuturism and the influence they would have on hip-hop and post-disco genres, but the musical collective actually goes back further, way back to the 1950s, when Clinton formed the doo-wop group the Parliaments in Plainfield, New Jersey.

Soon, however, Clinton would be influenced by Jimi Hendrix, Frank Zappa, and Sly Stone. He moved to Detroit and helmed the sister groups Parliament and Funkadelic, releasing classic albums such as Maggot Brain (1971), Mothership Connection (1975), and One Nation Under Groove (1978). Singles such as "Give Up the Funk," "Flash Light," and "Atomic Dog" cemented P-Funk's reputation for bringing the party!

George Clinton and Parliament-Funkadelic hit the Fremont Theater on Friday, Feb. 21 (doors at 7 p.m.; all ages; $60.15 presale at Boo Boo's and fremontslo.com), with 3GP opening.

Also this week at the Fremont, see metal and mariachi mash-up act Metalachi on Thursday, Feb. 20 (doors at 8 p.m.; all ages; $27.31 presale at Boo Boo's and fremontslo.com). These guys are a hoot.

Philly-based rock act Dr. Dog plays on Monday, Feb. 24 (doors at 8 p.m.; all ages; $34.34 presale at Boo Boo's and fremontslo.com), with Michael Nau opening. Early on, Dr. Dog was strongly influenced by The Beatles and The Beach Boys, but they also embrace the lo-fi sensibilities of the indie rock bands of the '90s.

Lent starts on Feb. 26, so SambaDá is arriving just in time to get the party started. The Afro-Brazilian ensemble plays a Numbskull and Good Medicine Presents show at The Siren this Saturday, Feb. 22 (doors at 8 p.m.; 21-and-older; $13 presale at Boo Boo's and eventbrite.com or $15 at the door). 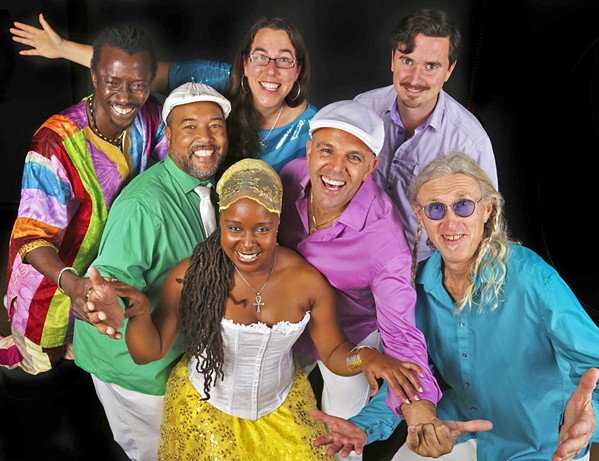 Brazilian natives Papiba Godinho and Dandha da Hora formed the band more than 10 years ago, bringing their love of samba-reggae-funk sounds and Afro-Brazilian song and dance.

"Papiba is a master of Capoeira, an Afro-Brazilian martial art form created by Brazilian slaves, which draws on music and acrobatic movements," according to their bio. "Dandha was born into the rich Afro-Brazilian traditions of Salvador, Bahia, and the Carnival group Ile Aiye, and started her dancing career at age 6."

You'll feel like you've been transported to Rio de Janeiro!

Stoke the Vote, y'all! 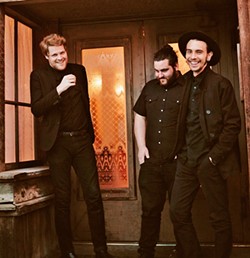 "Whether you're in favor of Oompa-Loompas, space aliens, or the right to bobsled naked, all should take advantage of the right our nation provides to voice your opinion at the polls," organizers said. "In our experience, there's no better way to inspire community activism and bipartisan booty-shaking than some good music! Luckily, we got the plug on that!"

Bands include Felly Fell, The Bogeys, King Fu, Hot Tina, The Ragged Jubilee, and Tropo, plus DJs and an appearance by SLO Mayor Heidi Harmon.

Also, don't forget Polyvision 2020 at SLO Brew Rock on Thursday, Feb. 20 (6 p.m.; 18-and-older; $28 at slobrew.com). The community-centered philanthropic music festival benefits With Us, a national nonprofit headquartered at Cal Poly that organizes the Aware, Awake, Alive program, which generates awareness among young adults and parents on the dangers of alcohol poisoning.

After an amazing 15-year run that took the group to locales around the world, Café Musique is calling it quits with a flurry of final shows starting this Sunday, Feb. 23, at Cass Winery Barrel Room ... except this one's already sold out, so let me tell you about the others so you can get tickets before it's too late.

Café Musique, I salute you! You're one of the best live bands I've ever seen!

"His original music blends soul, Delta-blues, rockabilly, jazz, and funk into a roots stew," his press materials read. "Starting with B.B. King and going through the various regions and time periods, he is inspired and influenced by historical figures like Muddy Waters, Mississippi Fred McDowell, Robert Johnson, Big Bill Broonzy, and Skip James to name a few."

The Octagon Barn presents Gangspil in concert this Saturday, Feb. 22 (doors at 6 p.m.; concert at 7 p.m.; all ages; $15 presale at eventbrite.com or $20 at the door). Two of Denmark's best musicians will take you on a grand tour of their home country's folk tradition. Sonnich Lydom (accordion, harmonica) and Kristian Bugge (fiddle) will perform old dance tunes and songs from every corner of their Scandinavian home country.

"Expect everything from wild polkas and jigs to lyrical waltzes, fiery reels, and happy hopsas, including the exotic 'Sønderhoning' dance tunes from the famous Island of Fanø, as well as long-forgotten songs from all over the country," according to press materials. This show will be a benefit for The Land Conservancy of San Luis Obispo County.

Traditional Irish band Téada plays a SLOfolks show at Castoro Cellars this Saturday, Feb. 22 (7:30 p.m.; all ages; $20 at (805) 238-0725). They just finished recording in Ireland and are now on a national U.S. tour this spring. They are great musicians well versed in the old ways!

The SLO Wind Orchestra presents a free concert of traditional and contemporary chamber music on Sunday, Feb. 23, in the Atascadero United Methodist Church (3 p.m.; all ages).

"Enjoy the sound of music and join the SLO Wind Orchestra in listening to the blended and unique enchantment of a double woodwind quintet, trumpet alliance, clarinet choir, brass quartet, and more with music from artists such as Vaughn Williams, Mozart, and Beethoven," organizers wrote. Mike and the Moonpies return to The Siren on Wednesday, Feb. 26 (7 p.m.; 21-and-older; $12 presale at Boo Boo's and eventbrite.com or $15 at the door). They're touring in support of Cheap Silver and Solid Country Gold, their sixth studio album that showcases old school country sounds. The album was named No. 5 on Rolling Stone's 40 Best Country and Americana Albums of 2019. After this show, they'll continue on a national and European tour through the spring and summer. Δ