Café Musique joins the SLO Symphony for Pops by the Sea!

For many of we lowbrow types who prefer a Pabst to a Pinot Grigio, classical music can be a challenge. Sure, we might be able to identify some of the major classical pieces such as Beethoven’s 5th and 9th symphonies, Mozart’s Don Giovanni, Handel’s Messiah, or Tchaikovsky’s The Nutcracker, and sure, we can tell the difference between a harpsichord and a piano, but we probably wouldn’t know Arnold Schoenberg from a Charles Ives, and good luck hearing the difference between a violin and viola.

But somewhere between Leonard Cohen and Frederic Chopin lies something even we classical-illiterates can dig—classical pops, that middle ground between the sublime and the mainstream, where easy listening meets classically orchestrated. Maybe that’s why the SLO Symphony’s Pops by the Sea is one of their most popular events of the year, and this year promises to be a doozy!

As in years past, the symphony has tapped a popular local group—this year it’s the amazing gypsy jazz, tango, folk act Café Musique—and arranged several of their songs for the orchestra. And who did the arrangements? Famed Hollywood arrangers Brad Dechter and Tim Simonec. Dechter’s been behind the orchestrated soundtracks of films such as Batman Begins, The Sixth Sense, Iron Man 2, Michael Clayton, and …well, 271 productions in all. Simonec’s credits include J.J. Abrams’ Star Trek reboot, Up, The Incredibles, Ratatouille … 94 credits in all.

The members of Café Musique couldn’t be more excited. Violinist and vocalist Brynn Albanese, a former member of the Boston Symphony Orchestra, who toured the world from 1994 through 1998 performing under the finest conductors in the grandest music halls, and who has appeared on the soundtracks for Schindler’s List, Jurassic Park, and Saving Private Ryan, is excited by what these arrangements mean for Café Musique. 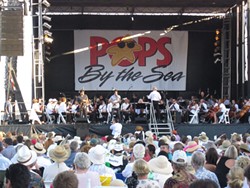 “We will have these arrangements and can take them to other orchestras, where we can see if they want to use us for their own pops concerts,” says Albanese. “The SLO Symphony will have rights, but other symphonies can rent the rights and we can perform them anywhere.”

Café Musique has already moved far beyond the environs of SLO County. For the past few years, they’ve been the featured performers on European cruises.

“We been to France and Portugal, and in April of 2015, we’re going to Holland,” said Albanese.

Café Musique also includes accordion player Duane Inglish, who picked up his instrument at age 6. He was a founder of the Live Oak Music Festival, owned The World Famous Dark Room for a time, and hosted the popular KCBX radio program “Basically Bluegrass” for years.

Bassist Fred Murray has played music his entire life, starting with piano, then clarinet, then bass, drums, and guitar. From rock to jazz to Cajun to funk, this versatile performer can do it all.

The final member of the band, Craig Nuttycombe, began his career in the ’60s playing for the surf rock act the New Dimensions. He was one half of the popular 1970s A&M Records recording artists Lambert & Nuttycombe, and he’s worked with members of Fleetwood Mac, Three Dog Night, and The Eagles.

The group’s former fifth member, percussionist and vocalist Piper Heisig, recently exited the band to pursue other projects, and Café Musique is currently auditioning performers to replace her.

“Percussion, mandolin, ukulele—Piper was so versatile, we’ll probably have to add two more people to the group to replace her,” laments Albanese.

Café Musique is an amazing outfit, and their concerts have made me tear up with the tenderness of some of songs and burst out laughing at the playful nature of others. Musically, creatively, and emotionally they deliver the goods every time they perform.

Like all of the SLO Symphony’s Pops by the Sea concerts, there’ll be plenty of diversity. This year you can hear pops arrangements of Michael Jackson’s “Thriller” and Cyndi Lauper’s “Girls Just Want to Have Fun.” The event will end with a thundering rendition of Tchaikovsky’s “1812 Overture,” another classical piece even I can recognize!

As usual, the SLO Symphony will operate under the baton of Michael Nowak, who explains how he tapped Café Musique for this year’s pops.

“I’m a big fan of them and have loved them for many years, and now for the last several years with Brynn Albanese as their guiding musical light, I felt the time is right. I love their style of music and the excellence of their performance, and I don’t mean that as a slight about who they had before Brynn. But she plays to the heart with all her energy and passion.”

Because of Nowak’s own deep connections to Hollywood—he’s conducted soundtracks for films such as Life of Pi, The Hangover, The Kite Runner, King Kong (2005), American Gangster … 41 titles in all—he was able to get world class arrangers Dechter and Simonec to adapt Café Musique’s music.

“Brynn gave me a list of potential songs that she and Duane compiled, and she gave me their albums, and on my trips between Hollywood and Los Osos I listened to tracks over and over that struck me as interesting, and they pretty much agreed these would be the ones.  We choose six songs, five that would be orchestrated. The big challenge after that was figuring out how a group that has four people would work with an orchestra.”

Dechter, who used to live in Cambria, has emotional ties to the area, and Nowak kept talking to him and soon convinced him and Simonec to take the project on.

“We don’t pay very much, but Brad heard the recording and said, ‘I love it; I’ll do it.’ They’ve come up with some spectacular orchestrations and arrangements for Café Musique’s music,” says Nowak. “Former resident Dave Becker, who’s now teaching at the University of Florida in Gainesville, did arrangements for the ’80s tunes. He’ll be back to play at the show.”

Don’t miss Pops by the Sea on Sunday, Sept. 1 at the Avila Beach Golf Resort. The gates open at 2:30 p.m. and the concert begins at 4 p.m. Visit slosymphony.com or call 543-3533 for ticket information.

Ziggy is, of course, the eldest son of Bob and Rita Marley, whose first band was Ziggy Marley and the Melody Makers.

Steel Pulse is a Grammy Award-winning act that started way back in 1975, well known for the socially conscious lyrics.

“We just can’t ignore the politics, because every life and soul that’s born on this earth is a political maneuver for someone, at some stage,” said singer David Hinds. “From a spiritual aspect, it’s really an upliftment through facing reality—what’s out there. We deal with positive spirits. It means putting aside the guns, the drugs, and all of the things that are ailments of society—especially the black communities right now.”

First of all, I had no idea “castoro” was “beaver” in Italian, so I learned something when I saw Castoro Cellars Winery was hosting a big event—Beaverstock—this Saturday, Aug. 31 and Sunday, Sept. 1 to celebrate their 30th anniversary (visit castorocellars.com/beaverstock for tickets; $30 each day or $50 for both). 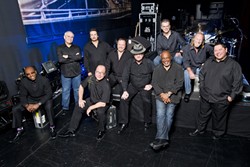 Castoro owners/founders Niels and Bimmer Udsen have, as their winery has grown, become big supporters of the local music scene, hosting regular concerts at the winery. Beaverstock is more than a music festival, celebration, and party; it’s also a benefit for the local nonprofit MUST! Charities that works to improve the quality of life for the less fortunate in our community. You’ll enjoy local music, national musical acts, and a whole mess of local food vendors.

The music runs from 1 p.m. to 10 p.m. both days. Kids under 10 are free. There’s free parking on site. And you’ll get a memento Beaverstock GoVino glass. 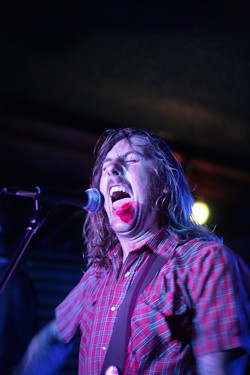 “It’s my favorite time of year again, Twang N Bang time,” says my pal Patrick Hayes of the Dead Volts and Twang N Band Records. “Somehow it seems we are now on the 8th Twang N Bang, which seems crazy to me. It started off being SLO bands only, but we’ve since expanded to have bands that play through here regularly and fit the Twang N Bang mold.

“This year we have bands from Sacramento (50 Watt Heavy), Santa Barbara (the Mutineers), and even Austin, Texas (Grub Dog & the Amazing Sweethearts). We also have the return of Cuesta Ridge to the bill. They haven’t played the last few, so it’s great to have them back. New faces include garagy rockers King Walrus and the Magicians, all-star SLO ladies the Trouble Spots, and big rockers Blossom Rock. Mainstays the Dead Volts, American Dirt, and St. James Infirmary round out the lineup,” adds Patrick.

That’s right, alt-country and rock fans, you can see 10 bands for no cover starting at 4 p.m. on Sunday, Sept. 1 at Frog and Peach! I’m hoping King Walrus doesn’t go on until after I get back from the pops! There’s huge buzz about them on the streets and I still haven’t seem them!

“Twang N Bang VIII is the best deal around as far as I’m concerned,” says Patrick. “Should be the social event of the season.”