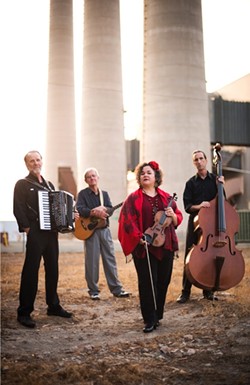 Just when I thought Café Musique couldn’t get any better, along comes Half Step Behind, their third album that was two years in the making.

“We should have called it Six Months Behind,” jokes violinist Brynn Albanese, who along with accordionist Duane Inglish, guitarist and vocalist Craig Nuttycombe, and bassist Fred Murray form the quartet that performs with a revolving cast of excellent guest artists.

We’re all sitting down on the back patio of Wild Donkey Café to talk about their new album and their plan to take over the musical world, bringing their self-described Gypsy, wild classical, tango, and folk music to the masses.

These four performers come from wildly different backgrounds, but together they’ve found kindred musical spirits in one another.

Brynn is steeped in classical traditions, having thrilled audiences from Boston to the Netherlands in a number of orchestras. The Peabody Conservatory of Music graduate has appeared on soundtracks such as Schindler’s List, Jurassic Park, and Saving Private Ryan. She’s served as concertmaster and soloist for the Tanglewood Festival Orchestra, Boston Philharmonic, and as principal second and soloist of the Boston Pops Esplanade Orchestra.

Duane began learning accordion at the age of six under the tutelage of master accordionists Frank Umbro (who performed for President Ronald Reagan) and Ray Gibson. He was a founding member and director of the Live Oak Music Festival in Santa Barbara, he hosted “Basically Bluegrass” at KCBX Public Radio for 16 years, and he owned the World Famous Dark Room.

Craig began his musical career in the 1960s playing rhythm guitar in the surf band The New Dimensions while attending Hollywood High School. He went on to become half of the acoustic duo Lambert and Nuttycombe, whose first album At Home was released in 1970 on A&M Records. Three years later the duo released their final album As You Will on the 20th Century label. In 1978, back at A&M, Craig’s solo album, It’s Just a Lifetime was released. He’s worked with members of Fleetwood Mac, Three Dog Night, and The Eagles.

Fred has been playing music all of his life, starting with piano, then clarinet, then bass and drums and guitar. He was playing bass in his first band by the age of 14. He also enjoys building and repairing guitars.

But let’s get to this new album, which kicks of with Tchavolo Schmitt’s rousing classic “Tchavolo Swing.” It’s the prefect display of the group’s instrumental prowess—they’re all incredible players on their respective instruments. “And having Joe Craven fill in the gaps on ‘Tchavolo’ was incredible,” Brynn says of one of the album’s many guest stars.

“We’re hoping to play a lot of festivals,” Duane says, “and since Joe is already at every festival, we thought he’d be a good guest performer because he’ll already be there.”

The very next track, “Comes and Goes,” is an original penned by Craig. The charming folk song is ostensibly about a woman moving in and out of Craig’s life, but as I listen to the lyrics, it could be a metaphor about the muse bringing inspiration: “She brings me a song then she just moves along.”

“There was a woman,” Craig admits, “but I like that [interpretation]!”

“With Craig, there’s always a woman,” Brynn quips. It’s clear these four performers work well together. Their warmth and friendship for one another is palpable.

On the album’s next track, Joseph Colombo and Tony Murena’s tango “Indifference” again shows the band’s incredible musicality, not to mention their incredible passion. It’s a stirring song, and Brynn’s violin sends shivers down my spine.

I think my favorite track on the record is “Sister Rosetta Goes Before Us,” a song by Sam Phillips written for Alison Krauss and Robert Plant. Café Musique tapped local singer Jill Knight for the song, and she takes it and soars. The song is a stunner, and it was suggested by one of the band’s fans. I could listen to it over and over.

Guest tuba player Tony Clements gets his chance to shine on “Hora de la Granicest,” a traditional arranged by Café Musique that’s just a hoot. The tuba is an inherently comical instrument, but what it adds to this song is immeasurable.

The group shows its playful side on their arrangement of Johannes Brahms “Hungarian Dance No. 5,” which they call “HD5” because, as Brynn said, “we messed it up so much,” and by “messed it up” she means “made it more awesome!” At one point, the track transitions to the chorus of “Wimoweh,” that song about being in the mighty jungle and the lion sleeps tonight. Yeah, they went there.

The album takes its name from another of Craig’s originals, “Half Step Behind,” which warmly laments unrequited love, and it’s a tender, unforgettable song: “I may be blind to all of the signs, feel that I trail half step behind, ever so far from wherever you are, just look around, I will be found half step behind.”

OK, maybe he’s a stalker, but when he sings “I can’t reveal all that I feel from a half step behind,” and then it launches into the chorus, it’s heart melting, especially as Brynn’s plaintive, forlorn violin jumps in. It’s a gorgeous composition.

Some might call popular orchestral music composer and Danish violinist Jacob Gade the original one-hit wonder. He’s remembered for just one song, “Jalousie” from 1925, and even if you don’t recognize Gade’s name, the song will be familiar. Café Musique’s rendition is typically a combination of respective and wildly inventive.

Larry Unger’s “Blues for Dave” gets some help from Eric Williams’ bouzouki, the Greek stringed instrument. “Eric would order instruments off the Internet and just learn to play them,” laughs Brynn incredulously. It’s got some great, subtle percussion on it, too.

“When we picked that song, I thought, what are we going to do with a Mexican polka? Who’s going to sing that?” Brynn recalls. “I immediately thought of Louie, but when we went to him he said, ‘You know Spanish isn’t my first language, right?’ But right away he was interested and said ‘yes.’”

The song’s a hoot, and what the entire album really proves is this is a band that’s evolved!

“The album was about exploring our sound,” Duane says.

“It was about taking a step back and finding out where to go next,” Fred adds.

“We started as an instrumental trio with accordion, bass, and violin,” reminds Duane, “a kind of Parisian, beret-wearing band, but we’ve evolved into a more world-music sound, expanding our horizons.”

“We’ve been getting compared to Pink Martini,” Brynn says, “which is amazing.”

The biggest hit the band has taken was the loss of vocalist, percussionist, and ukulele player Piper Heisig, who left the band during the recording process. She appears on all but two of the album’s tracks, and when she left, the producing duties shifted from her to Fred, who worked closely with Rick Sutton of Sutton Sound Studio, where the record was recorded.

The album’s selection of songs is especially good, and the order in which they appear takes listeners on an astounding musical journey, but one can’t help but wonder how the live shows will stack up without Piper.

The band acknowledges that her incredible range of utility makes her very hard to replace, and, in fact, they plan to continue to work with a variety of guest artists during live performances to make up for Piper’s absence.

“In a perfect world, we’d have Jennings Jacobson [of the Damon Castillo Band] on trap set and hand percussion,” Brynn says, “then have another vocalist.”

The band’s been working with a number of female vocalists since they already have an excellent male vocalist in Craig, but they know someone like Jill Knight is much too established with her own career to join the band full time. Luckily, Brynn is also a fine singer, but her violin duties limit her from singing as much as Piper did.

“We’ve had people come sing with us to see if the chemistry is there,” Brynn adds.

“A lot of people have contacted us from all over the state who are interested,” Duane says, “but the four of us your see here, this is Café Musique. This is the core. When we’re working with other singers, we’re looking for the ‘wow’ factor.”

“Someone who’s comfortable in her own skin,” Brynn continues.

Café Musique has several upcoming shows where they’ll promote Half Step Behind, which they describe as “a scrapbook of musical memories.”

Tickets for their shows can be purchased online. Visit their website at www.cafemusique.org, where you can also learn about their third cruise tour! On April 15 through 24, 2015, they’ll embark on a riverboat trip leaving from Amsterdam to Bruges on the luxury boutique ship the S.S. Maria Theresa, or call Gulliver’s Travels for details (541-4141).

Be sure to check New Times’ calendar in the paper and online for all the other great concerts this week.